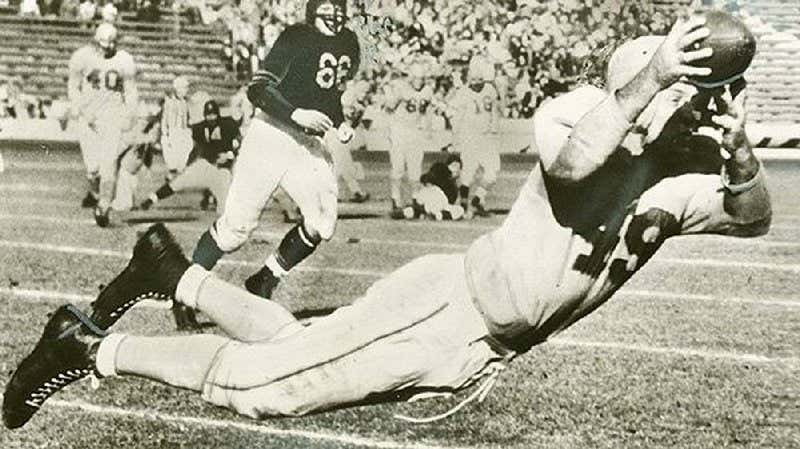 Jim Benton of the Cleveland Rams sets an NFL record by collecting 303 receiving yards on ten catches from quarterback Bob Waterfield. Benton’s big day helps the Rams beat the Detroit Lions 28-21 on Thanksgiving at Briggs Stadium.   The previous record was set two years earlier by Don Hutson of the Green Bay Packers, who accounted for 287 receiving yards against the Brooklyn Dodgers. Benton’s record would stand for 40 years.

The 1945 season was remarkable for the Cleveland Rams. Two years after a one-year hiatus, the Rams went into a Thanksgiving game against the Detroit Lions with a chance to clinch the Western Division. The Rams had never posted a winning season since joining the NFL in 1937. Their best season was a 5-5-1 record in 1939. After sitting out the 1943 season, the Rams posted a 4-6 record in 1944. Under first-year coach Adam Walsh, the Rams entered Thanksgiving with a record of 7-1.

The Detroit Lions were writing their own story, three years removed from a winless season, the Lions coached by Gus Dorias were in contention for the NFL Championship Game. They had a setback in Week 8, losing to the New York Giants, but could tie the Rams for first place with a win in the season's penultimate game. A loss, however, would eliminate them.

Coming into the game, Jim Benton had 27 catches for 645 yards and six touchdowns on the season. Jim Benton would account for nearly every passing yard against the Lions, as Bob Waterfield completed 12 of 23 passes for 329 yards. The Rams took an early lead on a 23-yard run by Frank Gehrke. The Lions would answer with a one-yard run by Bob Westfall.

In the second quarter, Jim Benton had his biggest play, a 70-yard catch and run that resulted in a touchdown. Bob Waterfield would give the Rams a 21-7 lead at the half with a quarterback sneak. In the third quarter, Steve Pritko caught a 17-yard pass from Waterfield to make it 28-7. The Lions would make a charge in the fourth quarter, scoring a pair of touchdowns, but it was not enough as Cleveland clinched the West with a 28-21 win.

The Rams would win the NFL Championship, beating the Washington Redskins 15-14. It would be the Rams' final season in Cleveland, as they moved to Los Angeles following the season. Jim Benton’s record stood for 40 years before Stephone Paige of the Kansas City Chiefs had 329 yards against the San Diego Chargers in 1985. The record is now held by Flipper Anderson of the Los Angeles Rams with 336 yards in a 1989 game against the New Orleans Saints. Benton ranks fourth in the single-game receiving record, with Calvin Johnson of the Lions having 329 yards in a 2013 game against the Dallas Cowboys.