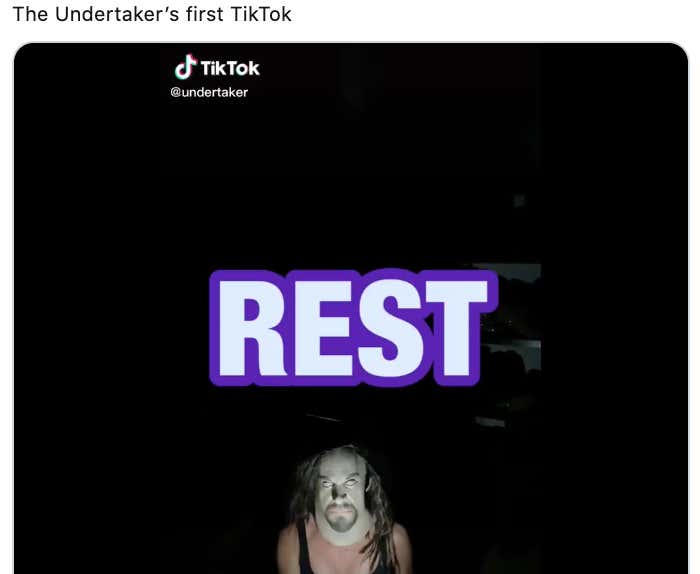 Look, I get that the Undertaker has to grow his brand and make money and stay relevant now that he's not full time WWE anymore. I completely understand that. But, and I've said this before, I will never accept the Undertaker breaking fayfabe. He was the last of the guys who was always in character, no matter what. Never gave interviews, never went Hollywood, none of it. He was the Deadman 24x7.

But then his full-time wrestling career ended, and he got on Instagram. And when he did that, I wrote this:

I’m so glad I came up in a time before social media and the internet. SO GLAD. Imagine trying to be wrestling fan in an age with social media. The reason wrestling was so great as a kid was because it was so easy to believe it. There was no internet with spoilers. No Twitter gossip or backstage stories ruining the storylines. You parked yourself in front of the TV on Monday nights for Raw is War and waited to see what Stone Cold would do next. There were no push notifications to tip off what matches would happen that night, or wrestling insiders trying to spoil who would be returning at a PPV.

So though I’m disappointed in Taker joining the Internet, I am optimistic to see where this goes. He’s been so private and secretive his entire adult life, a little peak behind the curtain at the real life Undertaker is very cool. I guess I just have to accept he is a real person, after all. So while it stinks, I can be optimistic that we’re in for something cool.

It's a give and take. I like seeing the "real" Undertaker, but wrestling was 100000x better before the Internet. And with him now on TikTok, boy, there's no turning back. If he starts doing dances I think Brock Lesnar needs to show up at his house and give him a few F-5s through a table.

On the other hand, maybe he'll go over to the Sway House and piledrive them all straight to hell. Or Hype House. Whichever one we don't like. Honestly, nothing makes me feel older than TikTok. Wasn't the government banning it at one point? Whatever happened to that? Anyway, here's Taker's TikTok debut.

Wish I hated it, but not bad, not bad at all. Fuckin' Undertaker. What a legend.