I was looking through a closet the other day and came across some baseball cleats I bought back in 2007. I made the purchase after joining an over-30 slow-pitch softball team believing it would be my last chance to capture some glory. I was 50 at the time.

We practiced a half dozen times before the season started and I felt good about playing second base. I was getting to the grounders, fielding them cleanly, and making accurate throws. My bat was a little weak but it was improving and I was starting to make better contact.

Before the first game, a teammate told me I should get a pair of cleats because the weather was starting to get colder and sneakers wouldn't give me any traction on the soon to be frozen infield. I took his advice and bought a pair of Under Armour cleats at the local sporting goods store. They fit great and they completed my uniform. 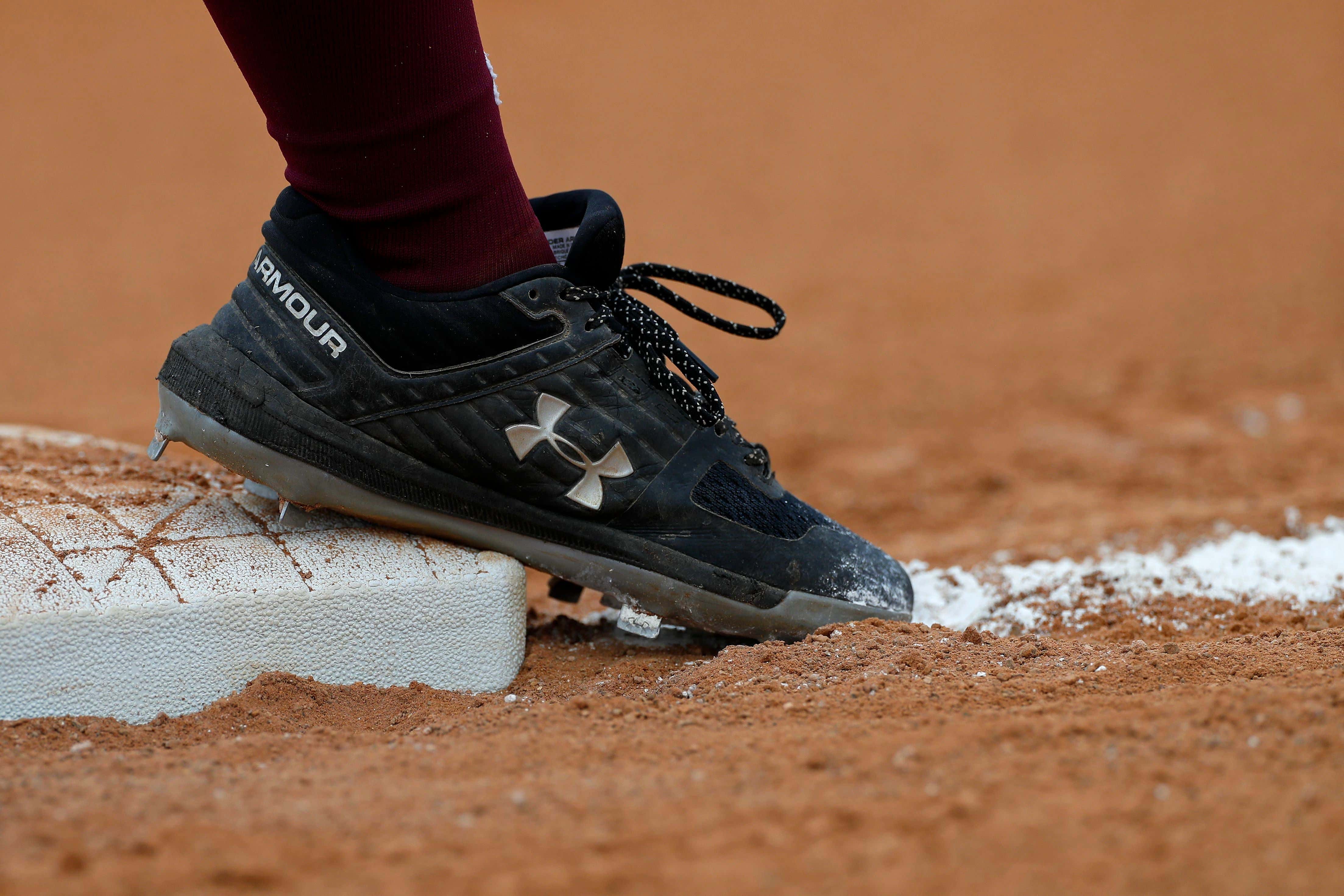 When I showed up at the first game wearing a pair of gray baseball pants, baseball socks, and the new cleats my teammates gave me thumbs up on the uni. I felt ready to play some competitive softball…

It was the top of the sixth and we were up by two runs. They had runners on first and third with one out when their number seven hitter came to the plate. He swung from the left side and once in the batter's box, he looked at me and then to the open spot between me and the first baseman. I moved a few steps to my left in an attempt to discourage him from trying to push one through the right side, but then he looked up the middle, and so I slid over a bit towards second base. We played this cat 'n mouse game until I decided to play him straight up.

He swung at the first pitch and hit one up the middle. I reacted quickly, moving to my right where I could backhand it and get the force at second, but something went terribly wrong. My left cleat got stuck in the infield dirt and when I continued moving to my right my left cleat stayed planted and I heard the god-awful sound of ligaments tearing in my ankle. The reach turned into a dive and so I did all I could to knock the ball down and keep it in the infield, and I did, but by the time I picked it up and underhanded it to the shortstop it was late. One run in, runners on first and second.

When I got up my ankle felt numb and my first thought was that I broke it. My right side hurt too and I motioned to the bench that I was coming off the field. As I walked off the home plate umpire yelled to me, "If your turn at-bat comes up and you can't hit, it's an automatic out". Just what I wanted to hear. I may have broken my ankle and if I can't swing a bat I could cost my team the game…

The next batter hit one up the middle on the shortstop side of second base and our shortstop made a great effort, but couldn't make the play. When Ed got up he was limping and he motioned to the bench that he was coming off the field. As he walked off the home plate umpire gave him the same spiel about batting in the bottom of the inning. Ed had pulled his hammy. We were the two oldest guys on our team and we both limped off the field during the first game. Sitting next to each other on the bench, we watched as a total of three runs scored leaving us down by a run.

In the bottom of the inning, Ed was up third and he singled, hobbling all the way to first in obvious pain. With two outs our number six hitter was up and I was on deck hoping I could stand in there and get a hit if I got my turn, but the batter before me made the final out and I never got up. 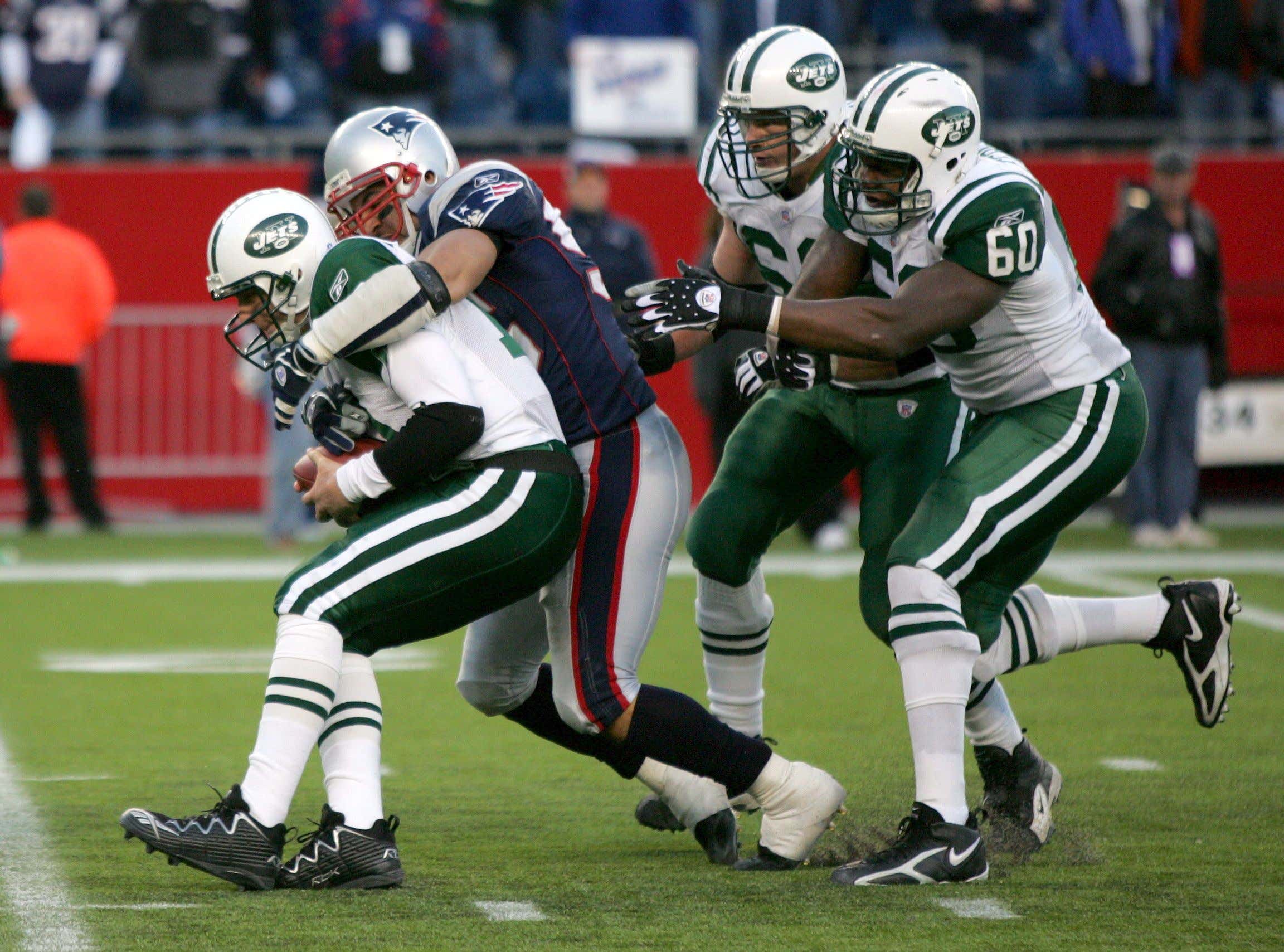 I left the field in a hurry so I could get home, assess the damage, and ice down my ankle. I took a seat on the couch and put on the Pats season opener against the Jets at Giants Stadium. I'd just bought my first HDTV and completed hanging it over the fireplace on Saturday and a friend of mine came over to watch. I was enjoying the game but still very concerned about whether or not I should run over to the hospital for X-rays. I was hurting…

The Patriots scored early and had a 14-7 lead at the half. It was at the beginning of the third quarter that Jets' quarterback Chad Pennington was sacked by Jarvis Green and hobbled off the field with what appeared to be a high ankle sprain. It was one of those cringe-worthy, floppy-ankle injuries they kept showing over and over. I wondered how he was able to walk off the field, but after collapsing on the turf in his first attempt, he got up and walked off on his own. I assumed he was done for the day, his injury looked far worse than mine. I continued icing my ankle…

Pennington was back under center on the Jets' next possession and I started believing I'd be okay too. It was like my fate was in Chad Pennington's hands, if he was okay, I was okay. But when Pennington was pulled late in the game and my ankle was still screaming, I knew it was time to take my friend up on his offer to drive me to Sturdy Hospital. 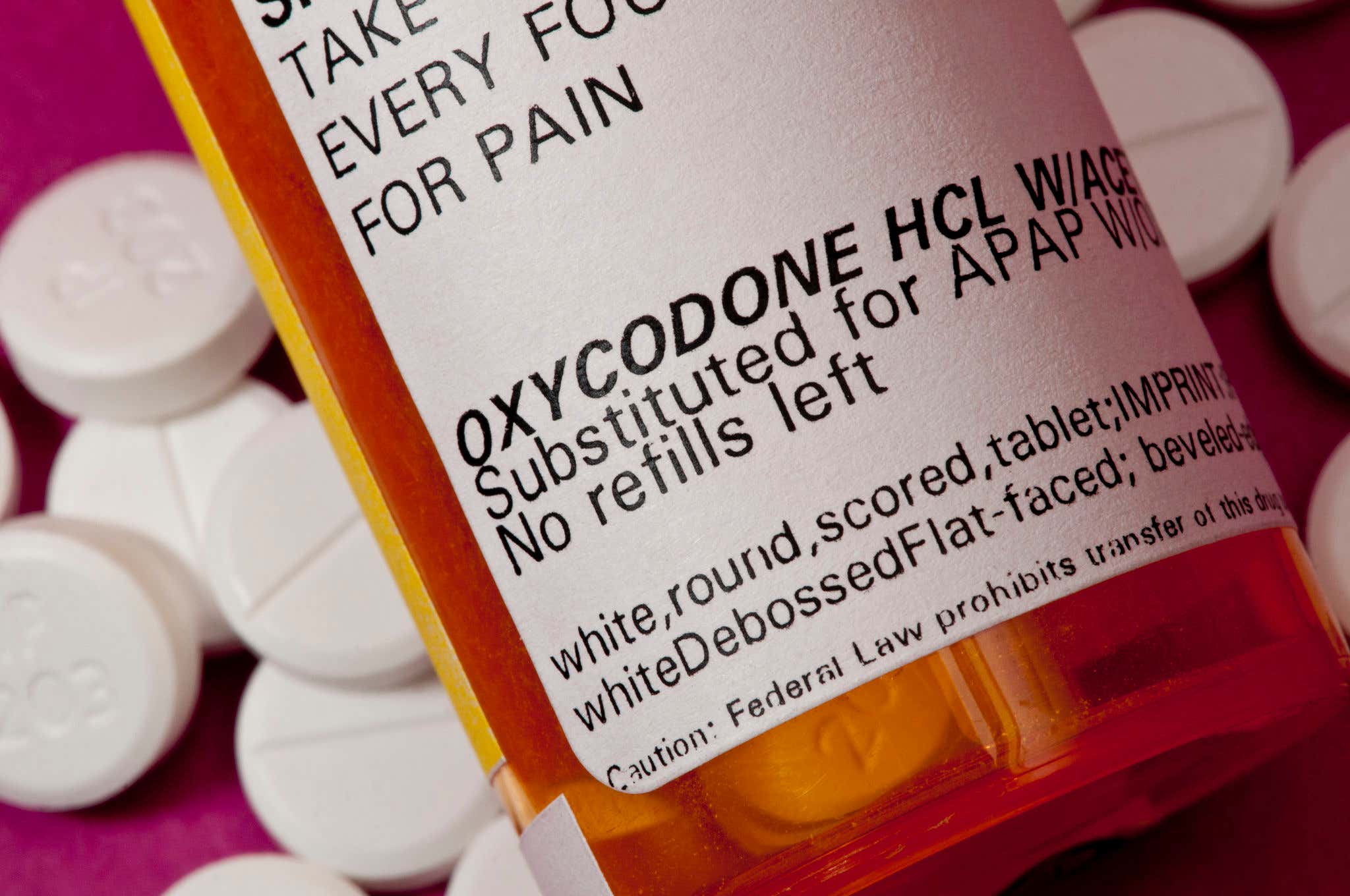 After X-rays revealed that I had a severely sprained ankle and one fractured rib, the ER doctor wrote me a script for Oxycodone and he made sure I took one before leaving the hospital. (Well twist my arm!)

I stayed home for a week, popping Oxy and watching TV on my new HDTV. I was having the time of my life, staying up till 3:00 a.m. every night, enjoying the fuck out of the HDTV-Oxy combo.

By the time I went back to work a week later I was all out of Oxy and still in some pain. Just before lunch, the Superintendent sent her secretary down to the plumbing shop to get me. I was seated in her office where she accused me of faking the injury to stay out of work. I just sat at the little round conference table in the middle of her office and listened to her go off on me. When I felt she had her fill I interrupted, "Did you check with the personnel office to see if I brought in a doctor's note?". She took a deep breath and said "No". I continued, "If you had you would have seen that I had a severely sprained ankle, a fractured rib and that the doctor's orders were no work for seven days." She immediately sent her secretary to the personnel office to retrieve the doctor's note and while we waited I took off my work boot, rolled down my sock, and showed her my still very swollen purple-colored ankle. She said she felt horrible and apologized for not requesting the doctor's note first. After she read the doctor's note she apologized again, and again, and again… 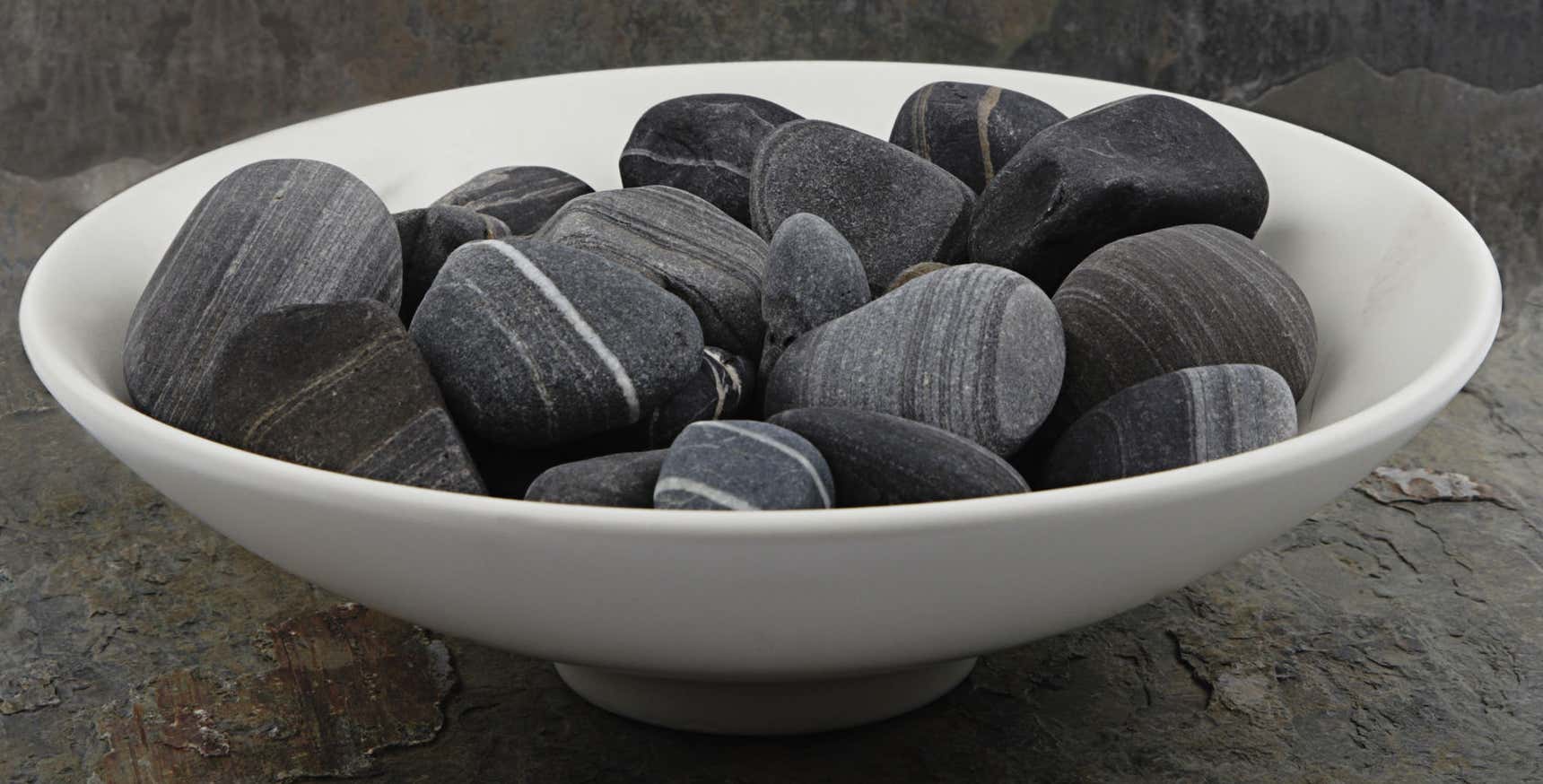 Then I pointed to the white bowl filled with stones in the middle of the round conference table and said, "When I saw rocks in the candy dish I knew this wasn't gonna be easy-" She laughed and said, "It was a gift" to which I replied "I bet it was…"

Limping out of there may have given some people the wrong impression, but I owned her and she knew it. (Never did like her much…)