Stepping on the grass, walking while talking on your cell phone, not wearing your glow-belt on a jog, leaving the designated travel radius on weekends by even 10 feet... The very integrity of our United States military hangs in the balance upon such rules & if you break one it could all come crumbling apart. You might as well hand everything over to Russia now.

Thankfully there are high ranking folks out there with eagle eyes, always watching, waiting, scheming, hoping to snatch someone up for the slightest infraction, and that was the case for one Sergeant Major who thwarted a Chaplain's (religious clergy in mil) evil plan... to walk around base with headphones in during his off-time. 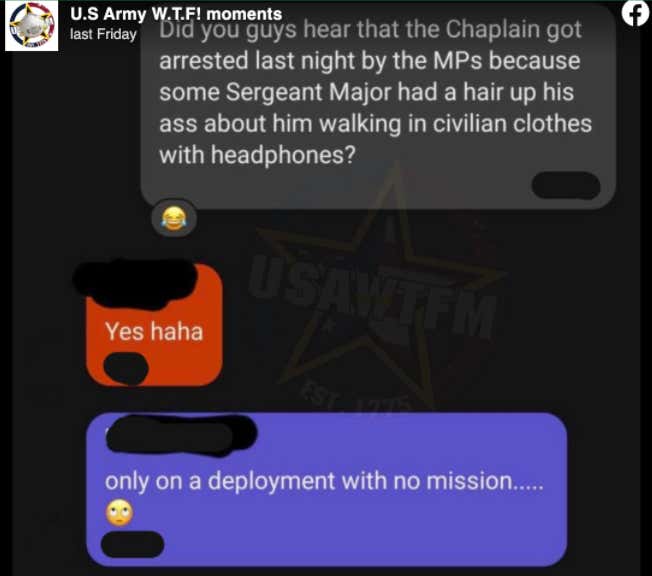 In a perfect encapsulation of 21st century life on Kuwait’s Camp Buehring, a Pennsylvania Army National Guard chaplain was handcuffed and hauled off by military police after a dispute with the installation command sergeant major.

What crime was committed by Capt. Justin Thomas, a chaplain who ministers to the 628th Aviation Support Battalion? Why, the unforgivable act of wearing headphones while walking, of course.

Thomas, as described, was casually strolling through the camp with his headphones in his ears when the sergeant major, eager to enforce installation policy, attempted to flag him down.

A spokesman for U.S. Army Central & Third Army told Military Times that Thomas was subsequently handcuffed and taken to the station for failing to have proper identification and wearing civilian attire.

If you're in the military this tale is not shocking in any way. If you're not & you're unfamiliar with the minutia of that lifestyle this could really explain a lot. Check out today's episode of ZeroBlog30 to hear the full story & decide for yourself if the Sergeant Major is a giant asshole. (But still, TYFYS!)