So a couple of weeks ago I saw this article in the NY Post about Royal Carribean looking for "human guinea pigs" (that was actually in quotation marks) for cruises designed to find weak spots in new Covid 19 protocols.

Naturally, I didn't think much of it.

NY Post - Cruise giant Royal Caribbean is looking for intrepid volunteers with the guts to climb aboard a cruise ship during the COVID-19 pandemic in exchange for a free ride.

“While we are eager to welcome our guests back on board, we have a lot to do between now and then, and we’re committed to taking the time to do things right,” the cruise line spokesman told T+L. “This includes training our crew in new health and safety protocols and conducting a number of trial sailings to stress-test those protocols in real-world conditions.”

We all remember the horror stories from the beginning of this hellscape pandemic of cruise liners being forced to stay at sea because no port would let them dock with infected passengers. Pretty wild shit.

Talk about a living hell.

So back to my point, I saw that Post article and thought "yah, good luck with that Royal Caribbean."

Boy oh boy did I underestimate the cruise people.

“And just like that…100,000 people have volunteered. We can’t wait to start this next phase with you all!” Michael Bayley wrote on Facebook.

Just three days earlier, the company set up a “Volunteers of the Seas” Facebook page to attract those eager enough for a free ride aboard a cruise ship during the COVID-19 pandemic.

The test sailings are among the cruise ship industry protocols instituted by the Centers for Disease Control and Prevention.

Cruise lines must launch the simulated voyages to test their coronavirus safety measures before being given the opportunity to resume operating from US ports, Cruise Industry News reported.

Royal Caribbean’s volunteers will reportedly begin cruising in 2021. The maiden voyage is most likely to CocoCay, the company’s private island in the Bahamas 55 miles north of Nassau.

Who are cruise people?

Let's go to a classic blog from Dave to explain -

Listen I’ll be the first to admit that I’m a vacation snob. An absolute vacation snob. Like you know the tagline of this company I started? “By the common man for the common man”? Well it’s total and complete bullshit when it comes to me going on vacation. (and eating at restaurants too for that matter) I won’t slum it. I’d rather not even go outside if commoners and kids are going to be around me. I’m the type of guy that when somebody says they are staying at a timeshare I smile and say that’s nice but I’m snickering as hard as I can snicker behind your back.

Anyway with all this stranded carnival ship talk dominating the news lately I can’t help but wonder who goes on these things anyway? I mean cruises are only for white trash people right? Like I know when I’m on vacation and a cruise ship docks I run the other way. I don’t want to be associating with “Cruise People” and their gift shop tshirts. Now I’m sure this blog is probably insulting to lots of people. I’m sure lots of Stoolies go on cruises and all inclusive resorts and shit. Well guess what? You’re probably white trash and you don’t even know it. Seriously the way they are describing the conditions on this Carnival Ship is exactly how I expect a cruise ship to be when it is running at full speed. Just kids, puke and shit everywhere. Count me out. I’ll see you fools in St. Barths in March.  Mogul style for days.

PS – As an addendum being in college obviously doesn’t count. You’re expected to vacation like white trash till you’re 24 and then you got to step that shit up

I like the fact that he threw in the p.s. because I went on a couple cruises when I was in college and they were all I could afford to impress my girlfriend at the time for "lavish vacations." (Narrator voice: "they were not lavish"). I was also apart of the infamous Gronk Cruise which was possibly the most fun 5 days of all time but that's another blog for another day,

Regardless, cruise people are fighting amongst each other in that facebook group trying to get on this ship. You could guarantee them they will get Covid and possibly be stuck on a floating strip mall for months and they would still jump at the chance. Which is kind of insane.

To each their own. Whatever floats your boat (zing), I respect. You do you cruise people.

p.s.- most Will Wheaton pic ever? found this in that facebook group while looking for the RC spokesman post 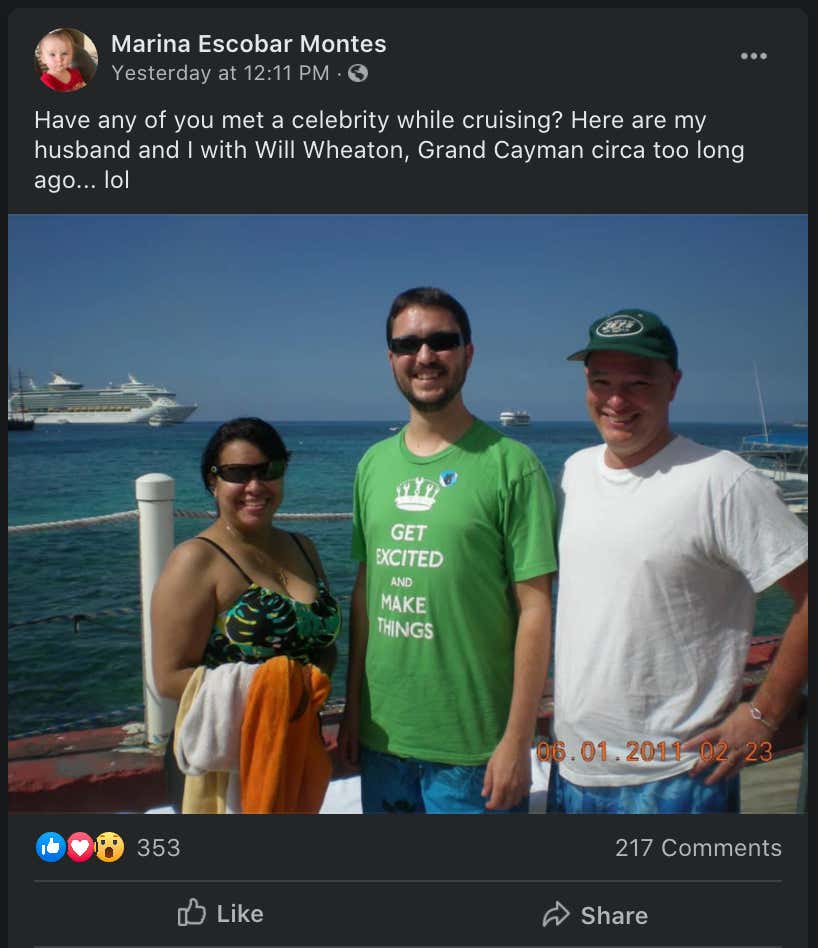 p.p.s. - your first cruise is quite the experience. they rope you in with these absurdly good deals. super cheap. you think you're getting a steal. then when you're aboard it starts adding up. the rooms look nothing like they do on the website. oh, you didn't splurge for the drink package? drinks aren't included. and they aren't cheap. which is where the experienced cruise people shine. I got assigned to a table with a family I would say closely resembled the Connor family from Roseanne. each night at dinner, in between scoffing to themselves about my foolishness, they'd instruct me on all the "cruise secrets". bring your own booze aboard in empty shampoo and conditioner bottles. never agree to the auto gratuity, tip your waiter and room cleaner sparingly, "they make pennies back in their homelands so they're happy with whatever". it was like hearing adults tell you how to live like poor teenagers.