It's been just a few days since Pope Francis went under fire for liking an extremely scandalous instagram photo of a "Bikini Model's" big fat juicy ass cheeks. 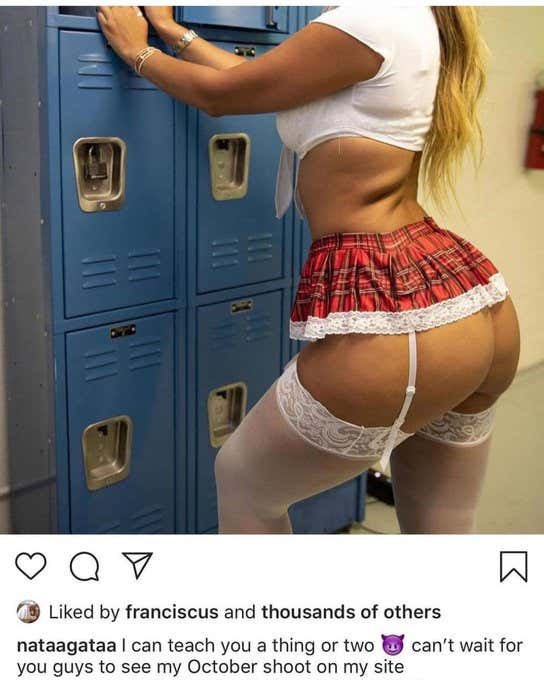 This has been all over the news for the last few days and starting yesterday the Vatican announced that they are launching a thorough investigation in which they will hopefully find out how/why the Pope liked that picture of those filthy ass cheeks.

However, i'm not really sure what the investigation would contain, it seems pretty clear to me. I assume the Pope said his nightly prayers, brushed his teeth, and hopped into bed. Maybe he tossed and turned for a bit before he gave in and realized that he simply wasn't ready to sleep. This happens to me almost every single night.

At this point I would assume he reached over to his night stand and grabbed his phone to do a little scrolling. One thing led to the next and suddenly he finds himself on the Instagram explore page with dozens of ass cheeks staring him right in the face.

We've all been here. I don't blame the Pope. At the end of the day he's still human. He had a classic case of the late night horny's. It happens to the best of us.

Well after doing a little investigating of my own I started feeling a little more uncomfortable about the situation.

Disclaimer: If the Pope or anyone from the Vatican is reading this currently I just want it to be clear that I don't put from the rough. I don't swing from the left. Are you picking up what I'm putting down? I like ass and boobs, NOT cock and balls.

Now, that we're all on the same page let me run you through my investigation.

Last week I broke out of my comfort zone and decided to post a thirst trap online. A "thirst trap" being a super hot and sexy picture of myself. These thirst traps did very well. You could say they went "viral" pulling in around 20k likes on twitter, and a few thousand on instagram. Not bad.

Well, I think it's safe to assume my glorious selfies were making their way around instagram. Perhaps they even made their way onto the instagram explore page. I know I said earlier in this blog that the Pope must've "found himself on the Instagram explore page with dozens of ass cheeks staring him right in the face"…but what if it wasn't ALL ass cheeks? What if something else somehow slipped it's way onto his explore page? Maybe it was just pulled in randomly by the algorithm?

I'm just spitballing but perhaps this is what his explore page looked like: 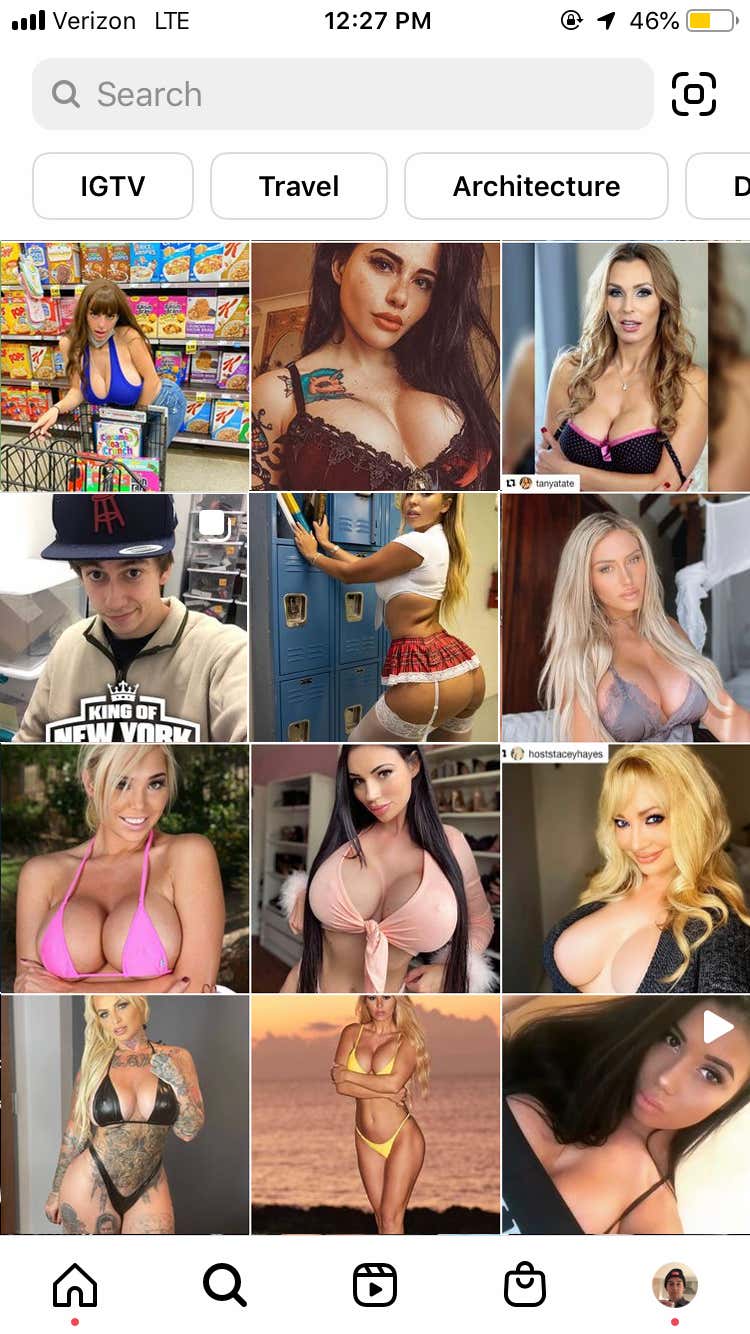 Whole lot of smutt right? Looks normal to me. Wait a second…what is that? What is that in second column down on the left side right next to the famous picture that the Pope liked? Is that…no…it can't be? Thats…ME. That's MY post.

Earlier this morning I woke up and I checked twitter as I usually do. I recall scrolling by tweet talking about how there's a current investigation going on in the Vatican about the popes instagram activity. I didn't really think much of it.

Fast forward about 30 minutes later and now I'm on instagram casually scrolling. I decided to check on my recent thirst trap to see if it got anymore likes while I was sleeping. Good news, it did. It pulled in a few more hundred likes bringing me to about 7k likes. Pretty decent.

At this point i'm just about to close out of instagram when I notice something at the bottom of my screen. "Who the fuck is franciscus?" I thought to myself. 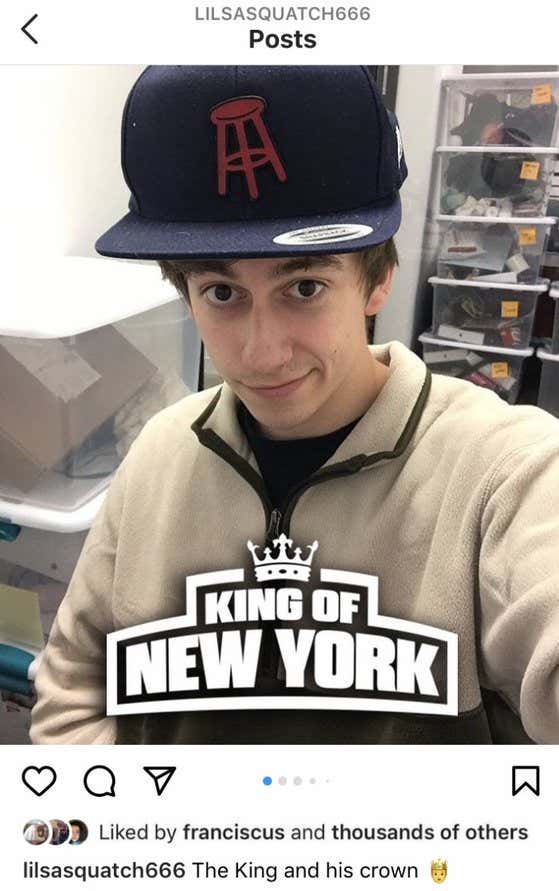 At first I thought with a name like that it could've been anyone? A smoking hot Italian babe perhaps? Who knows. So out of curiousity I clicked on the profile.

Good news: Me and that Bikini Model are definitely getting into Heaven. 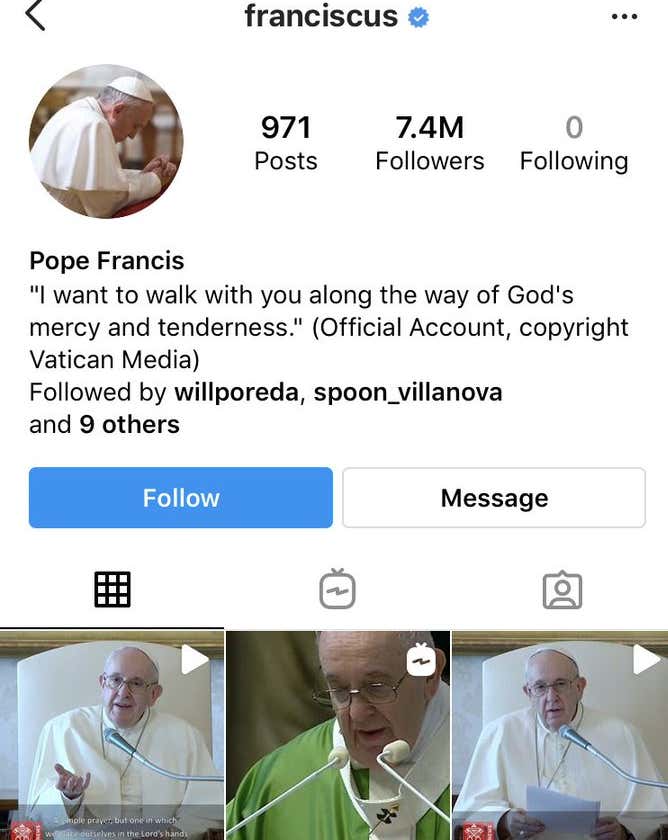 Is this the sort of thing I should take as a compliment? I mean the pope liked two pictures, one of a girl with giant ass cheeks and the other of a young handsome man who goes by the "King of New York" on twitter. I'm flattered, but definitely not interested.

Like I said before, I don't put from the rough. I don't care if you do Mr. Pope Francis, but it's just not for me. Thanks.