The Timberwolves have been technically on the clock since they won the NBA Lottery back in August. No one is certain what they’ll do, not even GM Gersson Rosas who is saying he is going to wait until he HAS to make a decision, before making a decision.

Not going to comment on THAT philosophy so we’ll just go ahead and move on.

Let’s face it, ever since the glory days of KD and Marbury, this franchise has been straight up trash. They don’t get as much shit for being as bad as they are, but make no bones. They have been tremendously bad. When 2004 is literally the only thing in 30 years you can hang your hat on, you know you’re on a historically bad run. Since then, they’ve made the playoffs ONE time. Their franchise winning % is .397, which is horrific but still better than their playoff winning %, which is .346. Both are the worst in NBA history for active franchises.

In other words, they are not just bad, they’re the WORST.

And you know what, they’ve had plenty of opportunities to get better. They’ve pretty much been a perpetual lottery team for over fifteen years.

Look at these picks they’ve had over the last 30 years. CRAZY 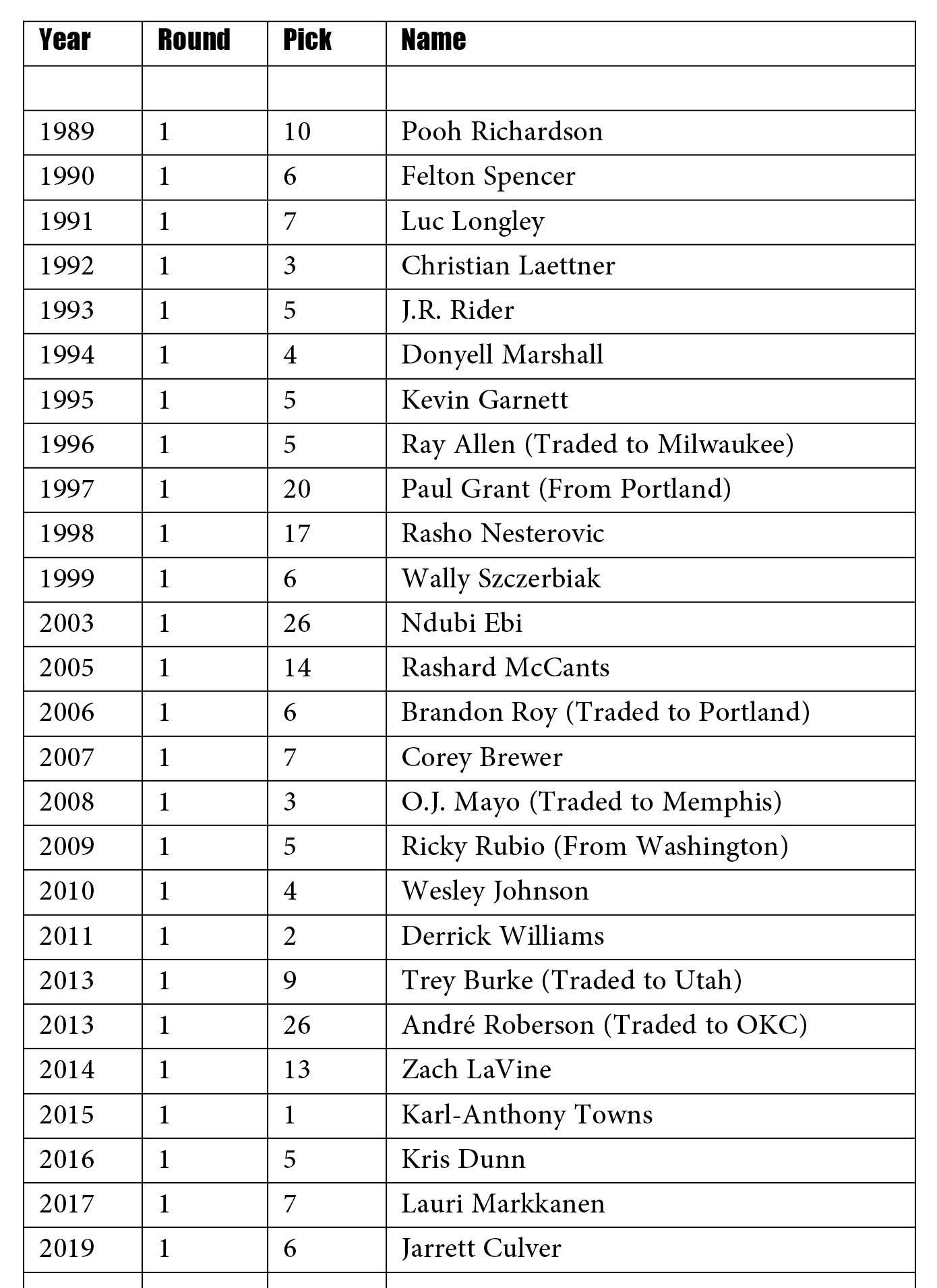 Since 2000, besides KAT, the only players they’ve drafted that are any good were either picks traded to other teams, or players that quickly departed for greener pastures.

Brandon Roy, Zach LaVine, Mario Chalmers, Andre Roberson, Ricky Rubio, Cedi Osman… this is just bad. When your best pick outside of KAT is Zach LaVine who quickly got the fuck outta dodge faster than you can say dunk champion? THAT is fucking depressing.

What other team on earth can you buy rookie basketball cards for every one of their #1 picks on eBay for $.99? 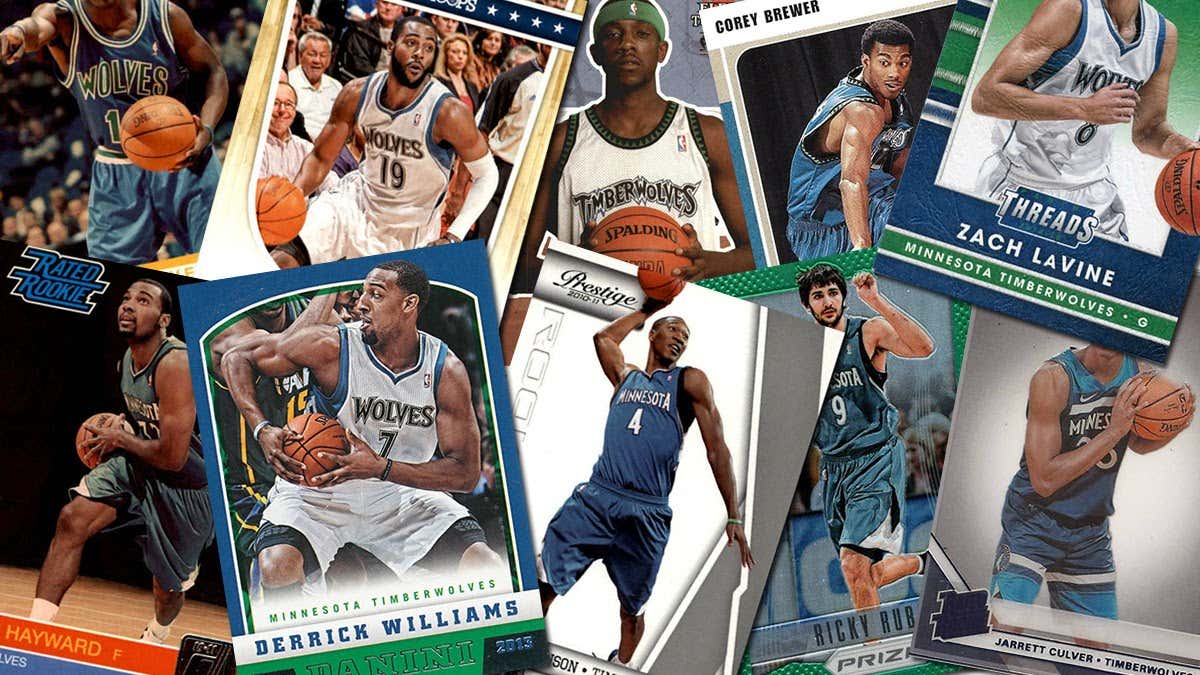 So obviously, this team has no history of doing well in the draft, and a tradition of simply fucking up.

All that’s supposed to have changed with the new regime that came in during the 2019 season.

And yet, the Wolves seem to have been snake bitten again. They got the #1 pick in what looks to be one of the weaker drafts in recent memory. James Wiseman, who played a grand total of 3 games for Memphis last year, may go #1 overall. That’s where we’re at. LaMelo Ball, who has been playing in Australia for the last few years, is also in play to be a top pick.

What should the Wolves do?

My personal thought would be to trade it for either more picks in this current draft, a current NBA player of need and a first rounder in the future, perhaps in next year’s draft which will by all means should be stacked.

Rachel Nichols spoke with new GM Gersson Rosas yesterday to get a pulse on what he was thinking about tonight’s draft.

Gersson seems willing to draft Wiseman and open to trading the pick and unwilling to tell us what he’s planning.

If history is any indication of the future, my prediction is that the Wolves will continue to do Wolves things… IE they will select LaMelo Ball, a guard who seems unwilling to give effort on the defensive side of the ball and is a V SUS shooter. If the Hornets had the #1 pick that is what they would do and honestly, Minnesota hasn’t been far behind Charlotte in terms of their ineptitude to select or develop the right player.

It seems certain to be either Ball or Edwards, in part because they apparently never even bothered to work out James Wiseman, although a few people are arguing the Wolves may try and recreate the Two Bigs offense with him and KAT.

Regardless of whether they trade the pick or draft Edwards or Ball, it’s likely another lose-lose situation. What more would you expect from a team that chose Ricky Rubio over Steph Curry, Wesley Johnson over Gordon Hayward, and Kris Dunn over Jamal Murray in just the past decade? Look at it this way: they’ve had FOUR months to decide what to do, and they still don’t appear to have any idea what’s going to happen tonight.

When you’re this bad, you don’t get the benefit of the doubt. So no matter what the Wolves do, chances are it will be wrong. Sad but true, and further evidence sometimes the #1 pick is a curse instead of a blessing, especially if your franchise is cursed like Minnesota’s.

Also, make sure to tune in tonight to the En Bee Ay Draft Show Presented by Mamitas Tequila & Soda to watch the Wolves shit the bed and somehow, someway teams like the Warriors, Heat and Raptors to make smart moves throughout the first round.