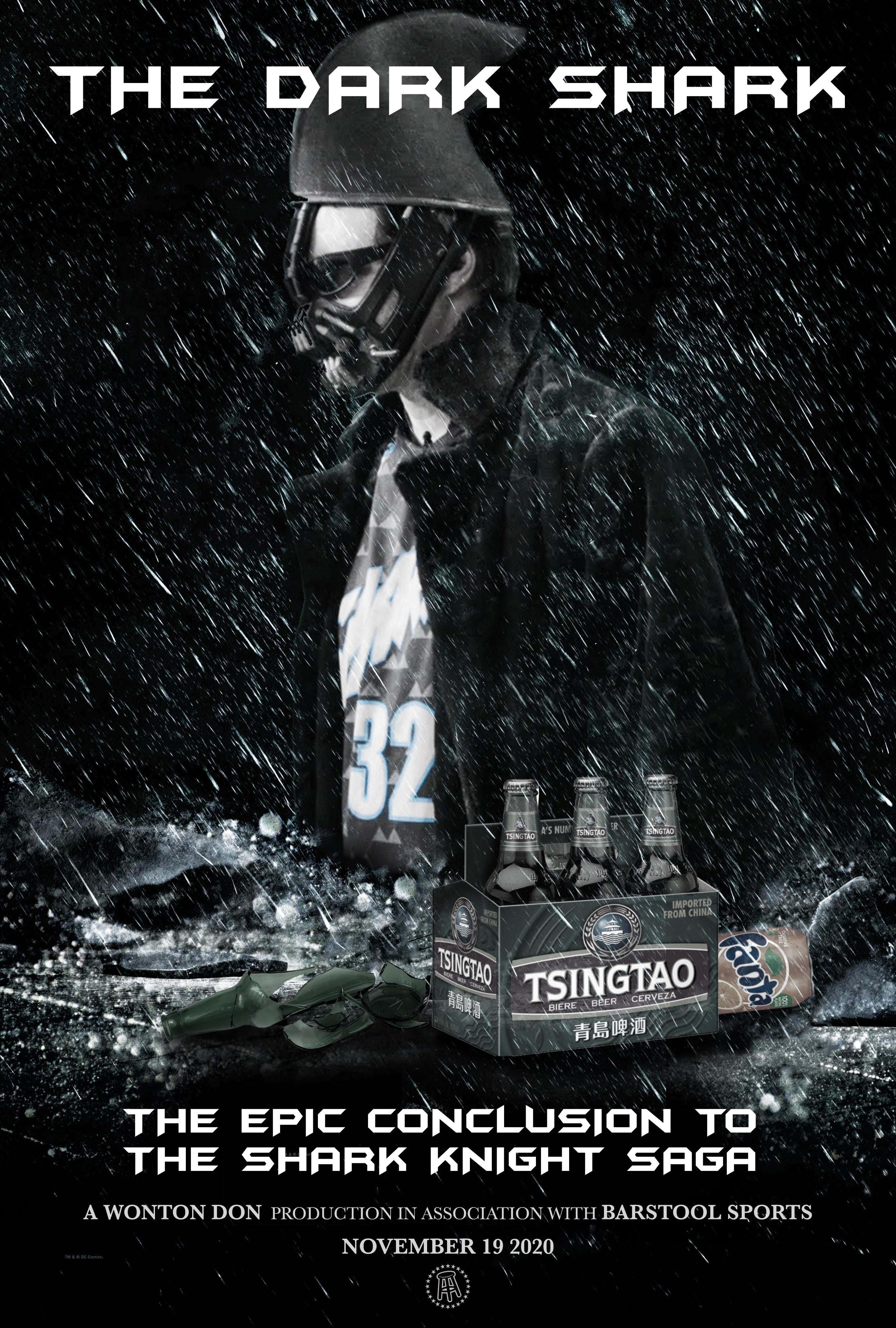 Tomorrow I'm dropping the Dark Shark, the culmination of my 8 years as a Shanghai Sharks fan and the epic conclusion to The Shark Knight Saga. But what the hell is The Shark Knight Saga some new fans may be asking? Well, some of my first blogs at Barstool were detailing the origins of it.

MY LONG CONVOLUTED HISTORY WITH THE SHANGHAI SHARKS PART 1:

MY LONG CONVOLUTED HISTORY WITH THE SHANGHAI SHARKS PART 2:

MY LONG CONVOLUTED HISTORY WITH THE SHANGHAI SHARKS PART 3:

I recommend reading the above three blogs first but I'll also provide a quick summary to bring you guys up to speed. My first year in Shanghai, 2012, I started attending Shanghai Sharks games, partially just to film funny videos and partially because I still needed my live sports fix while out in China.

My first Shanghai Sharks video ended up featured on Barstool Sports so I decide to keep making them. Players on the Sharks such as Gilbert Arenas, the Human Shoelace, and Guy with the Ponytail become my heroes. Stephon Marbury on the other hand, becomes my arch nemesis due to him being the star player on the Beijing Ducks, the Shark's biggest rival. At one of the games I decided to dance on the court with the cheerleaders between the 3rd and 4th quarter to pump up the fans.

While the fans were definitely amped, I ended up getting escorted out of the arena by cops and spending a couple hours in a local police station, only to be released after Yao Ming put in a good word for me.

However, the following season I found that my antics had made me persona non grata at the Shark Tank. Every time I attended a game I'd be shadowed by an army of security guards to ensure I wouldn't do anything "crazy" again. As a result, I started attending games in increasingly elaborate disguises so I could enjoy the Sharks in peace. It was during my time as an undercover Sharks fan that I slowly transformed into a vigilante known as the Shark Knight. This whole ordeal was caught on camera and can be watched below:

Now much to my surprise, the president of the Sharks saw this video, and instead of being upset that I had made a mockery of his security staff, felt bad for the way I had been treated and wanted to make it up to me, which he did by giving me two court-side season tickets…THE SHARK KNIGHT RISES INDEED. As you can see in the video below, for that entire season I was pretty much given the keys to the Shark Tank and allowed to do whatever I wanted. It was glorious.

After that season though, I moved back to the US for a couple years, only to return to Shanghai after being hired by Barstool in 2016. While I was out of the country a lot had changed. The Sharks had a new president so I knew I could kiss my VIP privileges goodbye. The Sharks had also signed Jimmer Fredette AKA the Mormon Megalodon and Celtics legend Yabusele, so I was eager to get back in the Shark Tank. But would I be treated like a hero…or a villain? It turns out neither, I was treated just as I should be, as a loyal fan.

The only thing that didn't change while I was back in the US was that Stephon Marbury and the Beijing Ducks were still terrorizing the Chinese Basketball Association. Thus, I took it upon myself to travel up to Beijing and do whatever I could to ensure they didn't make the playoffs. MISSION ACCOMPLISHED. FUCK THE DUCKS

Now being a Sharks fan employed by a giant American media company did have it's perks, as I was able to secure a media pass for one of the games.

Jimmer was a much needed shot of adrenaline into the Sharks fanbase. Instead of the stands being at 50% capacity like I was used to, every game started selling out. However, not even the Mormon Megalodon could get us past the first round of the playoffs that year.

Fortunately, Jimmer and myself both returned to the Shanghai Sharks the following season. Marbury on the other hand, had decided to leave the Ducks and spend his last year in the league as a player/coach for the Beijing Fly Dragons. Speaking of Stephon, while I was back in New York over the Summer I crashed a lecture he was giving at NYU and I'm happy to say we officially squashed our beef. I never hated Marbury as a human being, I hated him as Beijing Duck, and with him no longer on the team it was the right thing to do.

I'm not gonna lie tho and say part of me wasn't a little satisfied witnessing him lose his last game in the Shark Tank.

And a big part of me was downright ecstatic seeing him and Jimmer Fredette almost throw hands in his last game.

But once again, the Sharks didn't make it past the first round of the playoffs against the Ducks, although they did win their only game up in Beijing due to my intimidation tactics.

In Jimmer's third and final season on the Sharks, I only filmed one video, "Sharks Mafia", which focused on my semi-successful efforts to bring American tailgate culture to China.

But with that season ending in another disappointing playoff run, Jimmer decided to return to America where he was given a 2nd chance in the NBA by the Phoenix Suns. He made sure not to leave China before granting me an exclusive sit down interview tho, which I'm forever grateful for.

Jimmer's stint on the Phoenix Suns didn't last long and he eventually settled for playing in the Greek League, leaving me all alone in Shanghai. My support with the Sharks never wavered though and I filmed one more video at the Shark Tank in March of 2019 with Chef Donny behind the camera.

This brings us to where the Dark Shark begins, the 2019-20 season. I started filming this video in November of 2019 and when I ended up getting locked out of China in January of 2020, didn't know if I would ever be able to finish it. Today though, I'm happy to announce that thanks to help from a few of my co-workers, I just put the finishing touches on it. It drops tomorrow at noon and I think you'll find is a fittingly absurd and epic conclusion to my 8 years as a Shanghai Sharks fan. I'd recommend watching it over lunch or during half time of Thursday Night Football. It pairs well with 3 beers and a fanta.