I get COVID isn't funny. It's actually pretty terrible, especially right now. I really hope all of you stay safe and do your best not to put yourself or others in harm's way. But that headline? That's objectively funny. The number 1 topic in the country right now is what to do about Thanksgiving, what is safe or isn't safe, and this article goes with the "super spread" play on words and absolutely knocks it out of the park. Topical! Timely! Relevant! It's not often you're able to make such a fantastic play on words that ties together the last 9 months, and they went for it and I think they crushed it. It reminds me of when brands make bad 9/11 tweets

or offer free muffins in the hotel lobby 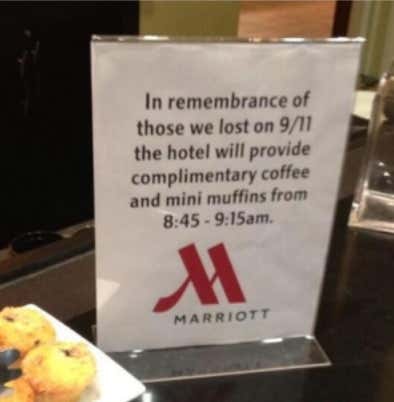 As it turns out, some folks did not see the "super spread" play on words as "funny", and they apologized:

"We apologize for our advertisement in Savory which used the language Super Spread to describe an abundance of food. While, in hindsight, the choice of words was a poor one..

Honestly I'd love to hire whomever made that title to be Barstool's full-time headline writer. No more Greenie "Last Night A Basketball Player Played Basketball" titles. We need this guy to go through our titles and make them clickable and we needed him yesterday.

As for Thanksgiving itself, this is a weird one because most everyone I know isn't going home, so I'm doing a couple Thanksgivings in the city, or "Friendsgivings" as I guess some call them…but they are also my real Thanksgivings this year. I'm excited though because I've always wanted to make stuffing. I love stuffing, I eat it once a year on Thanksgiving (and the couple days after), and then never again for 360 or so days. I've never made it though, and this is the year I'm going to make it. I asked for suggestions last night on Twitter

and got some good answers. The most common I'd say was add sausage. I've heard that before, but it made me confused, because now you're eating sausage with your turkey? Bold. But I think I'll try one out with sausage, since so many people suggested it.

Several people suggested making a cornbread stuffing, which also sounds great. I'm worried the cornbread will make it too sweet though, don't want to over-sweet your plate with a sweet stuffing and cranberry sauce.

I won't be making a turkey so I won't have the juices and odds n ends to mix into the stuffing, but I'm ok with that because it all mixes together on the plate anyway.

I will not be putting raisins or apples into my stuffing and spit in the face of the Pilgrims like that. Disgusting to suggest such a thing.

And most importantly, shut up about the semantics of "stuffing" and "dressing". My god people can be insufferable. We all know what we're talking about, stop being a succubus of fun.

I'm looking forward to trying a few things out, and if worst comes to worst, everyone will be too drunk to notice if it sucks or not as long as it's covered in gravy. God bless whoever came up with covering everything with gravy. What a hero.