While drug manufacturer Pfizer has lately been getting headlines for its potential breakthrough COVID-19 vaccine, Studio Entertainment One and Spike Lee are prepping an untitled tumescent tuner on the breakthrough of an earlier Pfizer miracle drug: Viagra. Lee will direct from a screenplay he has written with Kwame Kwei-Armah.

The original songs and music will be written by the acclaimed songwriting team of Stew Stewart and Heidi Rodewald, who previously created the Tony-winning musical Passing Strange. The musical is based on the David Kushner Esquire article All Rise: The Untold Story of The Guys Who Launched Viagra.

My first question is probably the same as yours. How does one make a musical about Viagra, and what would it even really be about?

It is inspired by the true events surrounding around Pfizer’s discovery and launch of the erectile dysfunction drug Viagra (Sildenafil), which was hatched as a treatment for heart-related chest pain only for researchers to find its game-changing qualities occurred below the belt. The little blue pill had immediate staying power in the global marketplace, perking up sex lives around the world.

You may also be thinking "Uhhh a Spike Lee musical?" Well, Lee has not only done musical and musical-adjacent work before like 'Chi-Raq', 'Passing Strange' and more.

That all said, it's still a musical about a dick pill. Doesn't really seem like it would be ripe property for a Spike Lee joint, but maybe that's exactly why it will be a Spike Lee joint. I, for one, can't wait to see this. I'm so excited in fact, that I wrote a little sample just in case any of the powers that be are interested in adding another songwriter to their ranks. 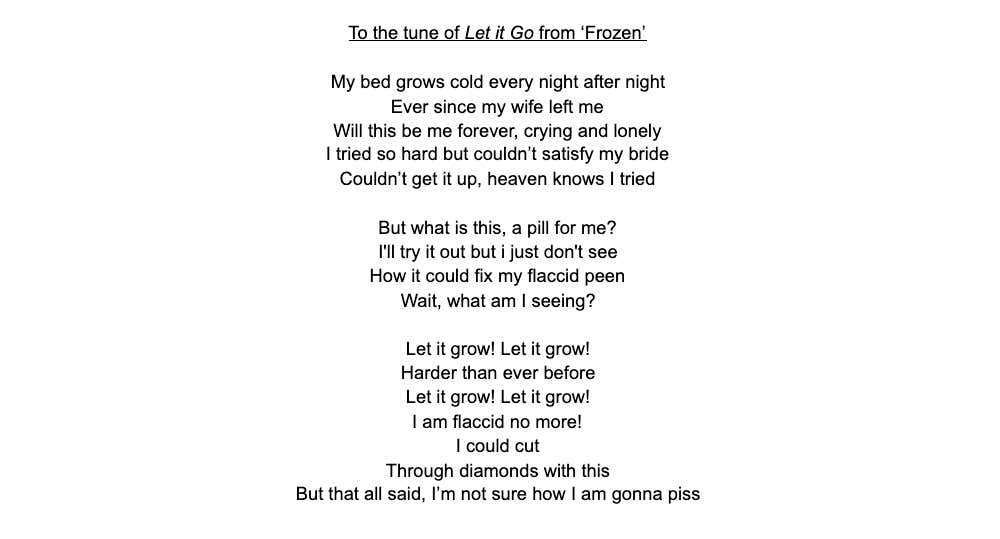