Variety - Some 17 months after Scooter Braun’s Ithaca Holdings LLC acquired Big Machine Label Group and all of its recorded music assets, sources tell Variety the veteran manager and entrepreneur has sold the master rights to Taylor Swift’s first six albums. The buyer, an investment fund, is as yet unknown but the deal is believed to be north of $300 million and closed in the last two weeks. Some insiders speculate the value could be as high as $450 million once certain earn-backs are factored in.

Ithaca purchased the Nashville-based independent record label Big Machine, founded by Scott Borchetta in 2005, in June 2019 for just over $300 million, of which Swift’s catalog — from her 2006 self-titled debut to 2017’s “Reputation” — was believed to be worth some $140 million. The acquisition encompassed all aspects of BMLG’s business, including its client roster, distribution deals, publishing and owned artist masters. Swift signed with BMLG at the beginning of her career. Her contract with the label expired in fall 2018, after which she signed a deal for future recordings with Universal Music Group.

The deal is viewed as a big win for Braun, who profited handsomely from his initial investment. Braun was also harshly and publicly criticized by Swift, who labeled him a “bully” and said just under a year ago that Braun was “the definition of toxic male privilege in our industry.”

Speaking of the sale of her masters, the Grammy winner contended:

“This just happened to me without my approval, consultation or consent. After I was denied the chance to purchase my music outright, my entire catalog was sold to Scooter Braun’s Ithaca Holdings in a deal that I’m told was funded by the Soros family, 23 Capital and that Carlyle Group. Yet, to this day, none of these investors have bothered to contact me or my team directly — to perform their due diligence on their investment. On their investment in me. To ask how I might feel about the new owner of my art, the music I wrote, the videos I created, photos of me, my handwriting, my album designs.” She added: “The fact is that private equity enabled this man to think, according to his own social media post, that he could ‘buy me.’ But I’m obviously not going willingly.”

This was back this time last year. Everybody remembers because it was a pretty big deal. Scooter leaned on his boy Biebs to defend him and take a shot at Taylor out of nowhere on Instagram, and a bunch of other artists took up sides. Fran and Ria did a pretty good job explaining it all when it happened-

Then yesterday this news dropped and Taylor again spoke out, with details that would be too much to believe had they to do with anybody other than Scooter Braun. 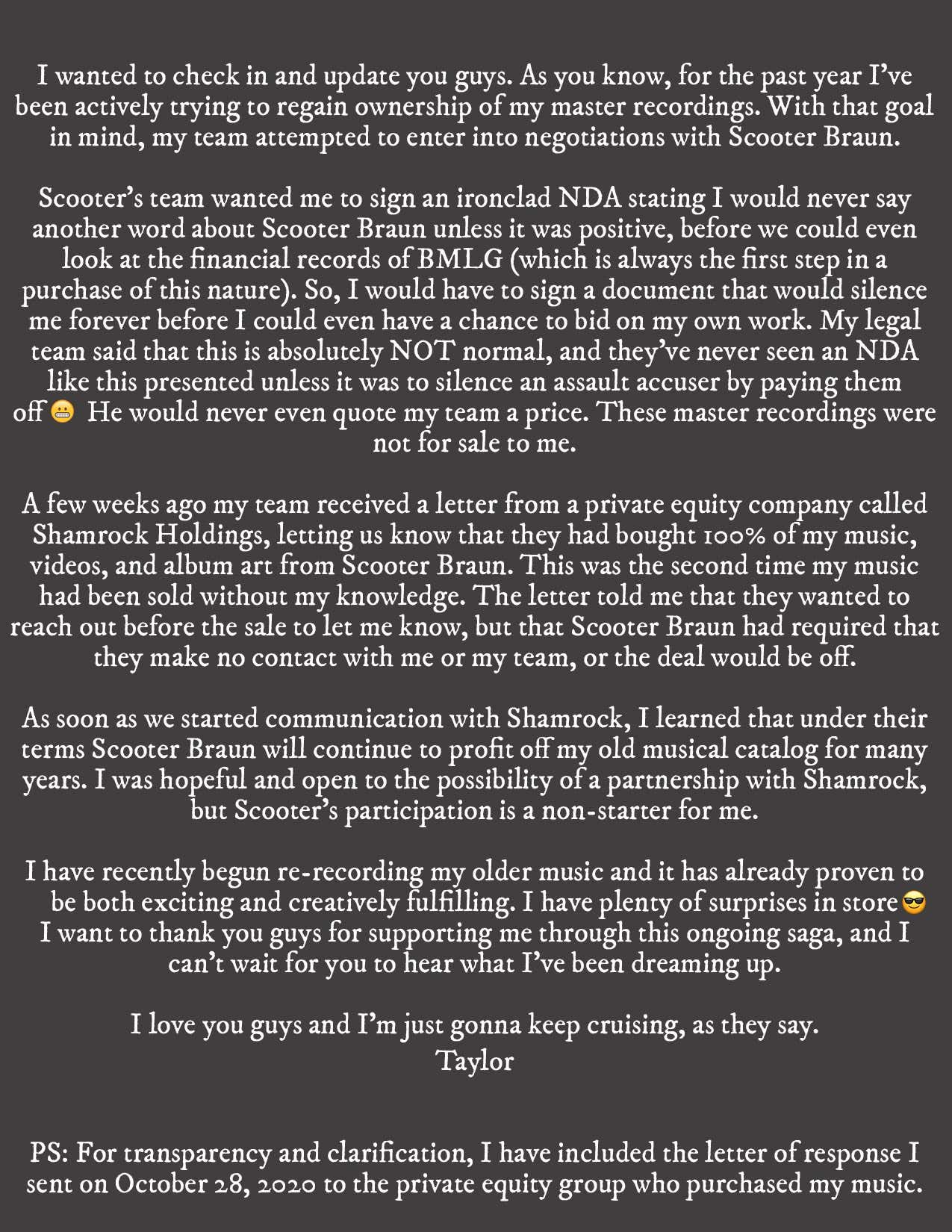 Just an absolute snake move by the thinnest skinned of thin-skinned people. An up-front NDA and indemnification stating "you agree you can't say anything about me ever again unless it's about how awesome I am" otherwise you can't even begin to negotiate to buy back your work?

It's pretty nuts that the arguably biggest pop musician on the planet right now is being played like this. Normally, I'd be apt to say her management, and Universal have failed her big time, but since canning Charlie Walk, Universal has proved only the best.

So you've got to assume Universal, and Republic, which Taylor is signed to and they own, have to be equally pissed off.

The first time it was just a dick move but you could argue it was a smart business decision by Scooter. Which a lot of people, especially Taylor haters, argued. But even her biggest detractors have to admit, this second time, including the NDA circumstances around it, are incredibly spiteful. Plain and simple. To not be allowed to be apart of the bidding process for your own work, not just once, but twice, is flat-out bullshit.

But that's just textbook petty Scooter Braun. If you've followed his career, or have just followed Barstool the last year, it's really no surprise.

Whether it's trying to intervene, "without being involved", in the whole suitman episode, or bullying a pop star and getting other's to join in, it's apparent the club promoter (not knocking it, I was once there too) and Kevin Federline pal turned agent/manager just is what he is.

But that hasn't stopped Taylor from carrying on.

Swift is free to re-record  songs from her first five BMLG-issued albums as of this month. While most contemporary recording contracts have provisions prohibiting the artist from recutting material for a period of years, Swift likely had favorable terms in her contract that would make her songs eligible for re-recording at a certain point after the end of each album cycle, not the end of her overall contract.

In Aug. 2019, she declared publicly that it was her intent to do. What does that mean for the assets sold by Braun? Master recordings earn revenue through multiple avenues, including streaming and consumption, sampling, public broadcast, use in television, film and commercials.

What’s the advantage of Swift re-recording her catalog? Snatching income from the buyer by making sure that her new versions, and not the ones previously owned by her former label, are the ones played by fans and used in any number of commercial ventures, such as advertisements, TV shows, movies, games and other uses. The company buying master rights would still need clearance from a song’s publisher in order to license it for commercial sync use going forward.

Which is exactly what she's done happily. And probably cathartically.

With word on the streets that she's already re-recorded Red, (her best album) and plans to drop it on Dec 4th, it's a win for fans of her music either way.

“Scooter Braun was 25 years old, he was a single man living in Atlanta alone, when he found Justin Bieber on the internet in the middle of the night. … I don’t know where Chris Hansen is, but in this one, that’s a goddamn predator if I’ve ever seen one.”