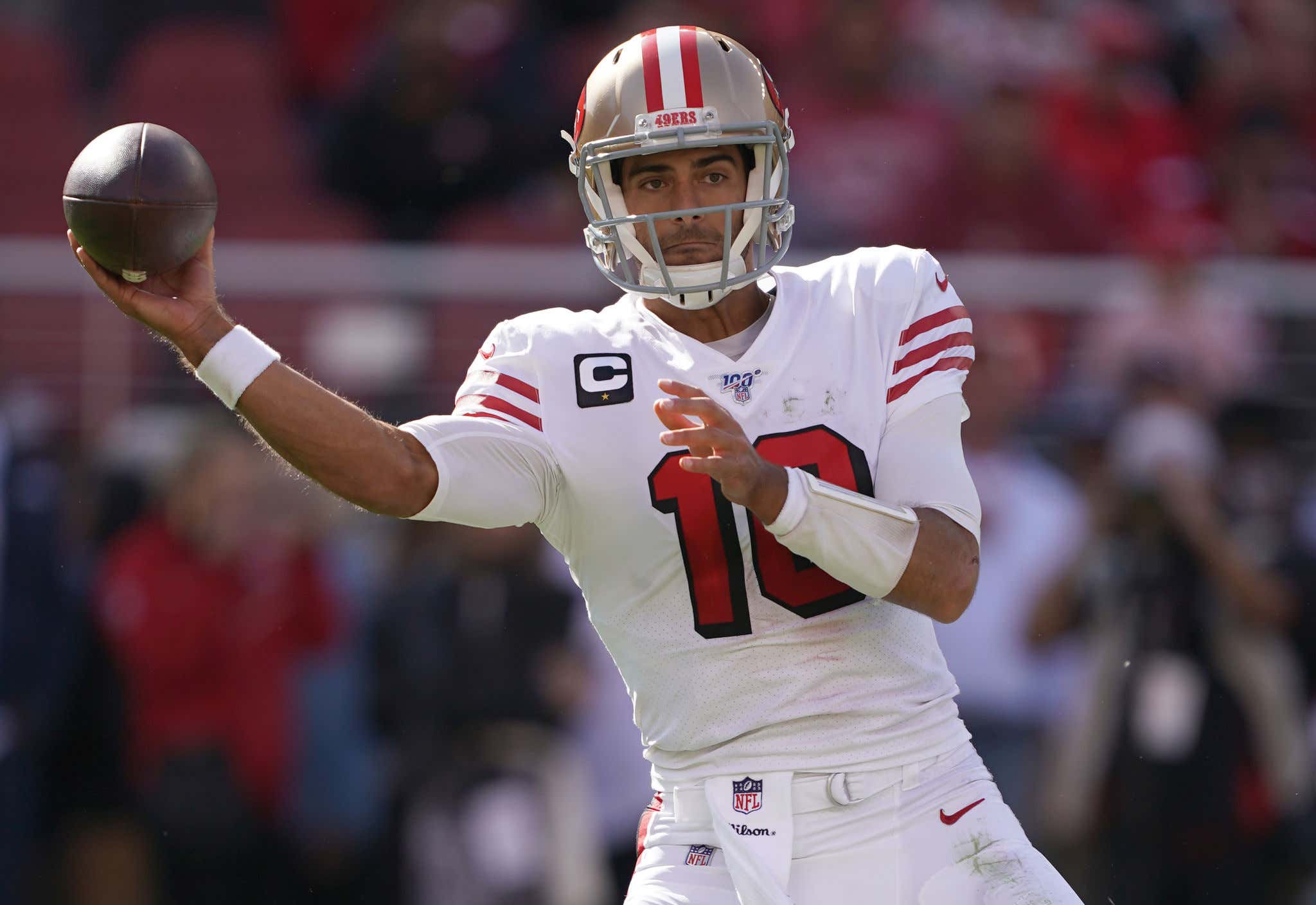 When you've missed four of your team's 10 games with a bad ankle, meaning you've now missed 17 of your their 42 games since the start of your first full season with the franchise, but you just took led them to a conference championship at the beginning of the year, it would unfair, cliched, and the worst kind of lazy hot taking to say "The mighty have fallen." But when the player in question is Jimmy Garoppolo and the headlines in San Francisco are starting to echo this one:

… it's maybe not unfair to say "The mighty have fallen out of favor."

I'm not saying that the people arguing Jimmy G is not the answer are right. Not by a damned sight. But when you even need to write the article defending him, that generally means something is wrong. Your quaterback has lost the trust of the team or the fans or something. I'm a little rusty on this sort of thing. But I did burn a ton of calories at the end of the 90s making these same cases for Drew Bledsoe. And in hindsight, I wish I'd just saved my energy and gotten fat because in the long run I was wrong.

I bring this up about Jimmy G because 49ers GM John Lynch gave a sort of room temperature "Jimmy is our guy" response to the San Francisco Chronicle (paywall):

"So, people can try to pick his game apart. And I do believe this year Jimmy hasn't played up to his standard. I think a lot of that is he's been somewhat compromised by his health … We have a lot of belief in Jimmy."

Meanwhile, The Athletic (paywall) is reporting that they've heard different from multiple anonymous executives who believe the Niners are getting out of the Jimmy Garoppolo business. That he doubts there's any confidence in the organization for the guy.

“You can’t factor in too much of this season because he’s been hurt the whole time, but in the Super Bowl, he proved what he is. They don’t trust him enough to put the ball in his hands and let him throw it around. His big gains come off of well-designed plays where he’s not throwing the ball down the field. He is giving it to his playmakers, and they are making plays.”

While another added, “I think he may be done in San Francisco. And if they keep him, it’s only because they don’t have another option.”

And while all that might just be opinions pulled wildly out of asscracks with no substantiation or inside knowledge - or maybe even agenda driven like so much of this kind of unnamed sourcery tends to be, it's not hard to see why people would think this way. For one, all the guaranteed money paid to Garoppolo was front loaded, therefore already paid out. And if they're going to find another QB, it makes makes sense to do it now and get out cheap. And two, if you look at the numbers, there is not much of an appreciable difference between his season and Nick Mullens':

And Mullens hasn't had George Kittle to throw to. So it's not out of the realm that Lynch would think long and hard about investing more veteran Franchise QB dollars in a guy not a lot of people seem to have a ton of faith in, when they're sitting at 4-6, have lost three straight and could be in drafting range of say, North Dakota State's Trey Lance or could afford an established free agent.

If there's fire where all this smoke is and Jimmy G is looking for work this Spring, it's not hard to see where the logical landing spot would be. But since that team has a quarterback, has won two straight and seems to be trending in the right direction, now is not the time to be thinking ahead. Still, it's not too soon to cue the Walking GIF.