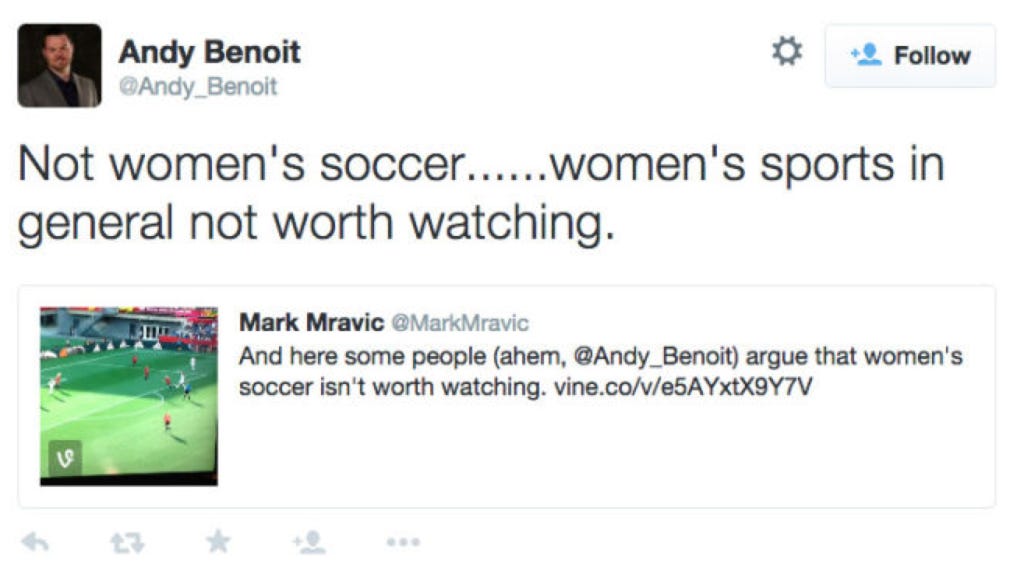 I’m not even going to bother screenshotting the tweets that are pissed off about this, but go ahead and Twitter search @andy_benoit, pretty much no one on the planet is happy with him.

It’s an opinion, and not an outrageous one. This isn’t some crazy “hot take.” Andy Benoit didn’t say women need to get in the kitchen, he didn’t say repeal women’s suffrage, he just said that women’s sports aren’t really worth watching. That’s not a particular inflammatory tweet, nor is it a unique one. A lot of people feel that way, and it doesn’t make you a sexist. Women’s sports aren’t as interesting as men’s, that’s not opinion it’s fact. That’s the reason there are different leagues, because women play at a different pace and skill level than men. If it was all equal then we’d just have the World Cup where men and women played together. We’d just have baseball, basketball, and hockey. There would just be sports, not male and female versions of them.

Now I’m not saying I totally agree with him because I did watch last night. But if it wasn’t international competition? Hell, if the Red Sox were on? Then I probably wouldn’t have tuned in. That’s just personal preference. Are we really that sensitive that not finding women’s sports to be filled with white knuckle excitement makes someone sexist and the rightful target of internet rage? You know I love my girl Hillary Knight but the USA women’s hockey team got their asses handed to them by a boy’s prep school like 13-1. I imagine the women’s soccer team would suffer a similar fate seeing as they were noooooo bueno yesterday. Saying team’s that get destroyed by high schoolers aren’t worth watching isn’t a horrible statement from a professional sports writer. Again, I watched, so I don’t necessarily agree with him, but if it’s anything aside from kicking another country’s ass then I’m very team Benoit.