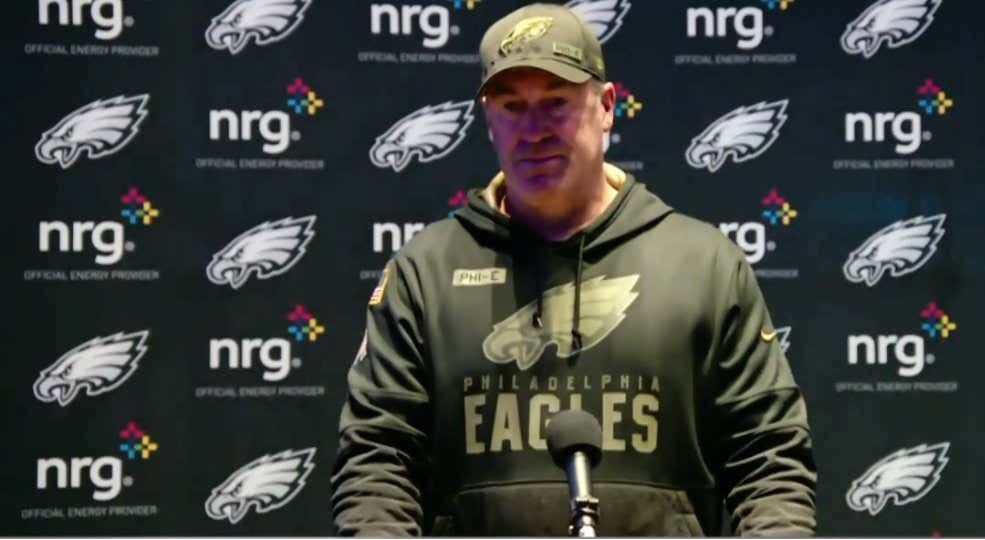 Doug Pederson is a prime example of why it is so dangerous when dumb people end up having a little bit of success. Success is like a mountain of cocaine to the underdeveloped brain. This man has a big ol' bowl of mashed potatoes sloshing around inside his skull, yet for some reason you know that Doug Pederson always thinks that he has the greatest football mind in any room he's in. He's a complete and total simpleton, but because he lucked himself ass backwards into becoming a Super Bowl winning coach, he automatically thinks that he can outsmart anybody else he goes up against. And that's how you end up looking like a moron going for 2 while your team is down by 4 points. That's how you end up looking like a moron when you completely forget that Miles Sanders is on your roster for multiple drives at a time. That's how you end up looking like a fucking moron when everybody else on the planet knows that you have to get Carson out of the pocket to have any success with this offense, but he's too damn stubborn to make those adjustments because it's not his precious little game plan.

Remember when the Eagles decided that they just weren't going to hire an offensive coordinator this season and that instead, they'd just run the offense by committee? Great call on that one, dipshits.

This putz had 2 weeks to reassess his team, see what changes need to be made in order for things to start clicking, and prove to everybody that his coaching style is more than just being the neanderthal who goes for 2 every time and acting like he's revolutionizing the game. And he didn't do a damn thing.

So the least the Eagles can do at this point is bring in someone who cares. If Eagles fans have to sit through this treacherous misery all season, the least you can do is let one of them take over the play calling duties. Have another Invincible tryout and let them call some plays in Madden or something like that. It worked the last time the organization did something like that. They got Mark Wahlberg out of it. At this point, I would take Donnie Wahlberg on the headset.

There's no reasoning behind his decisions. There's no nuance to anything. It's just "shut up and listen to the analytics dorks upstairs". It would be damn near impossible for it to get any worse than the current situation, so sure, I'll take Angelo from 9th and Morris. Or maybe even consider bringing Donovan McNabb back. That's a guy who knows how to rally the troops and fire everybody up.