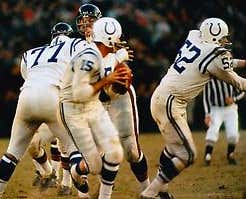 With Johnny Unitas sidelined with a back injury Gary Cuozzo makes his first NFL start for the Baltimore Colts. It was the first time since 1958 that Unitas missed a start. Cuozzo proves himself to be a more than capable backup, passing for 208 yards with five touchdowns as the Colts trample the Minnesota Vikings 41-21 at Metropolitan Stadium.

Johnny Unitas was the undisputed best quarterback in the NFL. The first quarterback to top 30,000 yards, he was the all-time leader in touchdown passes before the merger. In 1964, he had perhaps the best year of his career as he won his second of three MVP awards. Unitas was off to a great start in 1965 as the Colts led by Don Shula were atop the Western Conference at 7-1. However, during a 26-21 win over the Chicago Bears at Wrigley Field, Unitas suffered a back injury.

Gary Cuozzo got the start for Baltimore with Johnny Unitas resting his sore back. Cuozzo was born on April 26, 1941, in Montclair, New Jersey. Raised in nearby Glenn Ridge, Gary Cuozzo played football at the University of Virginia. Undrafted, he was signed by the Colts to backup Johnny Unitas in 1962, following an impressive game in the Senior Bowl.

The Vikings entered the game with a record of 5-3 for coach Norm Van Brocklin. The Vikings dominated the game early, as the Colts did not get their initial first down until midway through the second quarter. Minnesota drove the ball into Colts territory twice in the first quarter but came away empty-handed. In the second quarter, the Vikings got on the board as Hal Bedsole hauled in a six-yard pass from Fran Tarkenton. The Colts finally got on track late in the second quarter as they scored ten points to take a 10-7 lead into halftime. Following a short field goal by Lou Michaels, Cuozzo connected with Jimmy Orr on a 43-yard pass play that went into the end zone.

After being outplayed but holding a three-point, the Colts began to pull away in the third quarter as Gary Cuozzo connected with Jimmy Orr again from 22 yards out. After Tarkenton answered with a 17-yard touchdown pass to Paul Flatley. Cuozzo meanwhile added touchdown passes to Lenny Moore and Raymond Berry.

In the fourth quarter, Baltimore got a second field goal from Lou Michaels, while Willie Richardson caught Gary Cuozzo's fifth touchdown. The Vikings got a 101-yard kick return from Lance Rentzel to close out the scoring, with the Colts winning 41-21. With the win, the Colts improved to 8-1 on the season.

Johnny Unitas returned a week later as the Colts beat the Eagles 34-24 to reach 9-1. Unitas would struggle with injuries for the rest of the season. The Colts meanwhile stumbled and finished at 10-3-1. They would play the Green Bay Packers in the Divisional Round with Tom Matte at quarterback as both Unitas and Cuozzo were unable to play with injuries. The Colts lost the game in overtime by a score of 13-10.