Agree or disagree with Pope Francis reforms - and the Catholic Church is very much divided on them - you've got to hand it to him. So many leaders try to cultivate this image of being the cool, new, different, outside-the-box thinker when in fact they're just more of the status quo. Politicians who try to talk sports to come off as relatable to the working class but mangle athlete's names. That office manager who thinks it'll improve morale to throw stupid parties for every occasion when everyone would rather just get their work done. The principal who tries to promote school spirit with days where you wear funny hats or pajamas to school.

But God bless him, and I mean that literally, Francis backs it up. He was supposed to be the Cool Pope, and he's been delivering.since Day One. He's all about same sex marriage. He's made it easier to annul a bad marriage. He's on Twitter and Instagram.

And now he's turning the Cool up to 11 by liking IG model's posts: 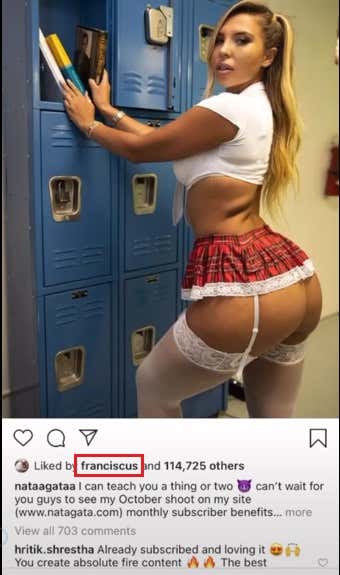 Francis came to the Holy See with the expectation he'd be more like the rest of the Catholic laity, and he is. He's like that fun uncle you love to see come over because he has no filter, says wildly inappropriate things, embarrasses your parents and makes you laugh nonstop.

We don't know exactly what attracted him to this particular post by Nata Gata. But since 114,724 other people liked it, his is the popular opinion, obviously. Maybe it's the vaguely Catholic schoolgirl outfit. But the friends I have whose daughters went to those schools say the rule is that if a girl can stand up straight and reach the hem of the skirt with her fingertips, then it's too short. And Nata would definitely get sent home to change.

But hey, if the Pontiff approves, so do I. He's my spiritual leader. My shepherd. And I will follow. Both his religious teachings, and Nata Gata's account. Thanks for the recommendation, Your Holiness!

I’d love to say we’’ll see her in heaven. But none of us are getting there after discovering her account.