(KOIN) — A 20-year-old man made an astounding recovery after falling nearly 60 feet from a tree and into the Washougal River earlier this month. Now, he’s urging people to take extra caution while adventuring in the outdoors this summer. Kyle Ponciano said it was just a normal day when he and a group of friends made their second trek up to Naked Falls on June 6. A little alcohol and some daring jumps quickly turned into a deadly combination. Around 4:30 p.m., the branches Ponciano was holding and standing on snapped. He said it was the last thing he remembered. “I remember dozing off and my friends yelling in my face, ‘Kyle, wake up!’” Ponciano said. “It was wild.” Two hours later, the 20-year-old was in surgery. He had to be placed in a medically-induced coma after suffering a torn abdomen, stitches to his lower abdomen, a partially collapsed and bruised lung, a shattered right elbow and broken pelvis. Several surgeries later, Ponciano is in good spirits. He was sent home from the hospital earlier this week. As he continues his road to recovery, he said he has a message for others. “I want people to know they’re not invincible,” Ponciano said. “I definitely didn’t think that anything like this could ever happen to me.”

I love how Kyle is turning this into some kind of PSA like it’s a “The more you know…” commercial. “I want people to know they’re not invincible”? Hey bro, we fucking know. Almost everyone in the world knows. That’s why we don’t climb fucking redwoods to jump into whitewater rapids (or a babbling brook, whatever, rapids sounds cooler). I will give Kyle props for even getting out of the water though. If I tore my abdomen, needed stitches in my lower abs, had a partially collapsed and bruised lung, a shattered elbow and a broken pelvis I would just tell my friends to let me die. I’d fight the fuck out of them while they tried to rescue me and just let myself drown. Send me down the river, boys, because this old body is too broken and too tired to make a comeback.

PS – Kinda fucked up of Hank to not go help his friend. 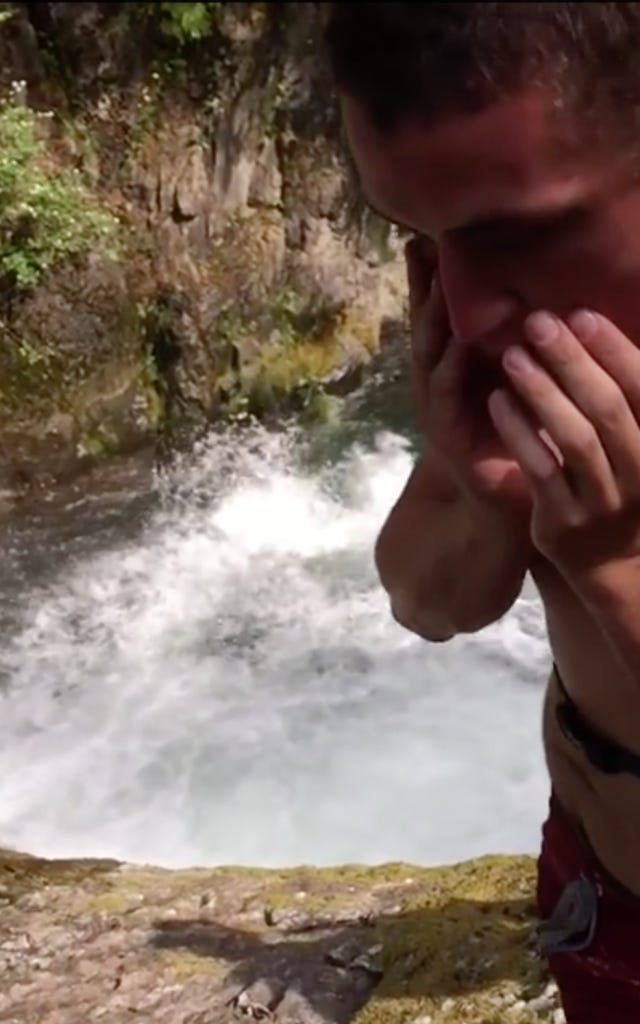