Created by Miller, the eight-episode single camera comedy series is set at a high school reunion afterparty. Each episode will feature a retelling of the same night told through a different character’s perspective, each with its own unique visual format and film genre to match the teller’s personality.

I think this series has some fantastic potential and I'll tell you why. The obvious reason is that the cast is insane. Friend of the program Ben Schwartz is absolutely hysterical, as is Ike Barinholtz, Ilana Glazer and Sam Richardson. Richardson played maybe my favorite tertiary character in all of TV, Richard Splett, in VEEP.

Dave Franco is obviously a well-liked familiar face, and Zoë Chao is a great up and comer. I think a lot of you have some hesitation around Tiffany Haddish, and I understand why. She is a genuinely funny actress that was hilarious in her early roles like 'Girls Trip'. After that, she got offered a ton of roles and seemingly didn't deny a single one of them, which is totally fair! If you're and actor/actress who goes from struggling to find work to being offered a ton of roles and money, you would say yes too! However, the market became flooded with her content wayyyyy too quickly and the projects she was in were mostly just bad. It's easy to bitch about quality over quantity as the consumer, but I don't fault her for trying to make some money since it's precisely what I would do.

Point is, she can be very funny. The second reason I think this will be good is Lord and Miller. As a unit, they are one of the great comedic storytellers currently in the game. 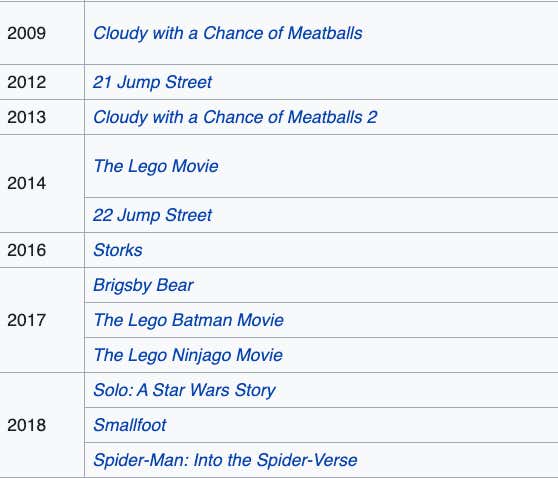 The 2 jump street movies are unbelievably funny, probably 2 of the top comedies of the last decade. In face, according to my ratings on MovieRankings.net, they are!

The concept of a high school reunion after party is definitely sketchy, but I trust this group.