The year is 2520. A clone of Max Kellerman is screaming at a hologram of Dan Orlovsky about why Carson Wentz isn't "the guy" in New Philadelphia (current Philadelphia had been torn to ruins 300 years ago at this point) and that his inconsistency is killing the Eagles. Hologram Orlovsky concedes that Carson has perhaps been pressing the issue too much and has been making some reckless decisions with the ball, but it's only because his entire O-line is injured and he has nobody to work with. They scream back and forth at each other about this topic until commercial break, just as they've done for the past 502 years. Next up, a drone version of Stephen A. Smith makes the case that Joel Embiid will never be elite unless he starts to take his conditioning and nutrition seriously.

I mean what are we doing here, people? How in the actual fuck are we still having this conversation every single week? At what point does it end? At what point does somebody with a brain step in here and say to themselves, "you know what? It's over. The Eagles kept Carson Wentz and now Nick Foles is on his 2nd team removed from Philadelphia. There's no reason we should discuss this topic anymore, and we sure as shit don't need to get Brett Favre's dumbass opinion on the matter. Let's move on to something actually entertaining and not entirely played out yet".

But that day is still yet to come. Because on a Tuesday morning after the Eagles had a bye week and 2 years after Nick Foles chose to leave the Eagles to become a free agent, here we have Brett Favre making the same exact moronic argument that so many folks have made before about Foles. "ThE eAgLeS wOn A sUpEr BoWl WiTh FoLeS". Yeah, no shit. We get that. But would he ever have had the opportunity to play for a Super Bowl if it weren't for Carson Wentz stringing together 11 wins and getting home field advantage throughout the playoffs. You give me Nick Foles starting for an entire season and none of that happens. So just shut up, Brett. You were a better Something About Mary, and you stunk in that. Not really, but I'm just lashing out.

Fucking christ this is exhausting.

Sidenote: The Packers should have kept Doug. 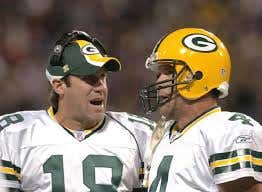