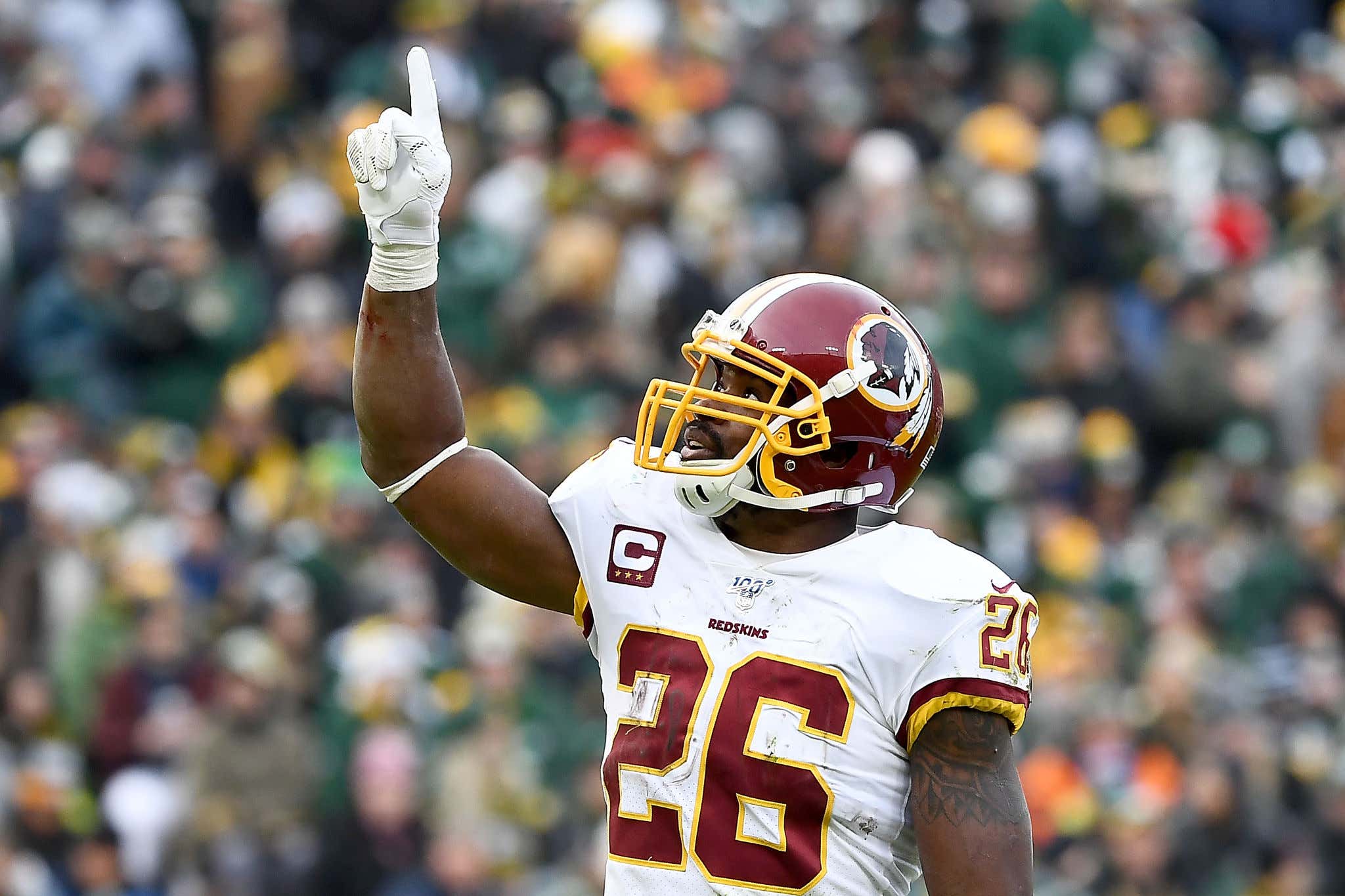 Adrian Peterson is probably the best running back we've seen in the last 15 years. There's been other great ones obviously, but I'd put AD at the top. His career until injuries sidelined him and completely derailed it was astounding. 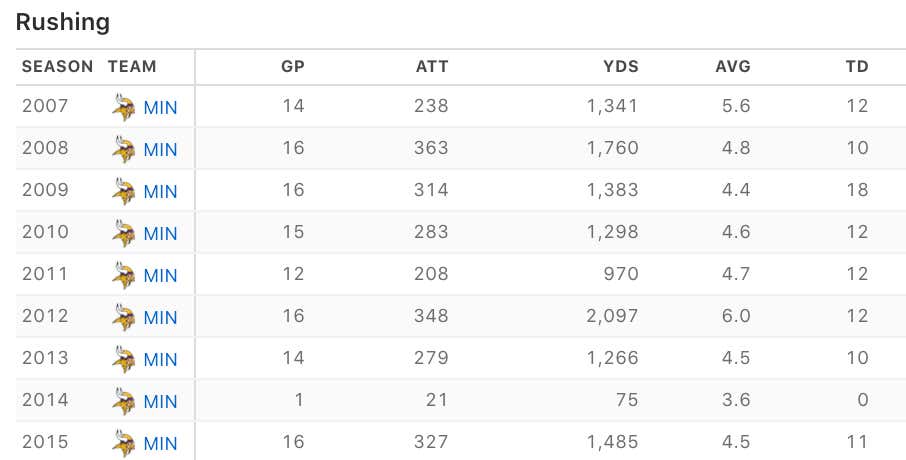 Coming back from that knee injury and immediately putting up nearly 1,500 yards is insane.

And that 2012 season is just laughable considering he under UNDER 20 CARRIES IN 7 OF THE GAMES. 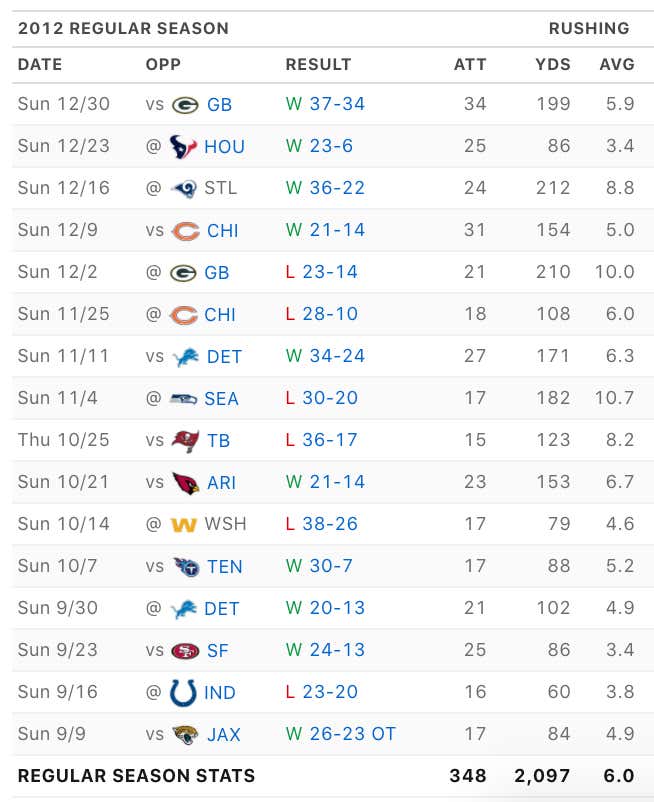 So for my money, ADAP is the best running back of the last 15 years.

He was out of the league though, after playing only 10 games in 2017 split between New Orleans and Arizona, nobody even brought him into camp in 2018. He was done. And then our Washington Football Team came calling, and Peterson started running like a spring chicken again, running for over 1,000 yards in 2018 and 898 (on 211 carries) last year.

And then, thinking Darrius Guice was going to be the new lead back in Washington, he was cut right before the season started.

NBCW - Throughout training camp, it appeared as if running back Adrian Peterson was destined to once again have a role in Washington's offense for 2020. Then, just one day prior to the deadline for final roster cuts, the 14-year veteran was surprisingly released.

Though the running back has earned numerous accolades throughout his career and continued to show his value, he can't deny that he has a little something extra to prove on Sunday.

“Of course there’s a little chip there," Peterson said. “Of course you get to realize what you let go. I would be lying to you to say that chip isn’t there.”

On one hand it's great that he still plays with the same passion, the same chip on his shoulder as he always had. But obviously he's deflecting right now, because he's trying to hype himself up to play better because since week 3, he's done next to nothing: 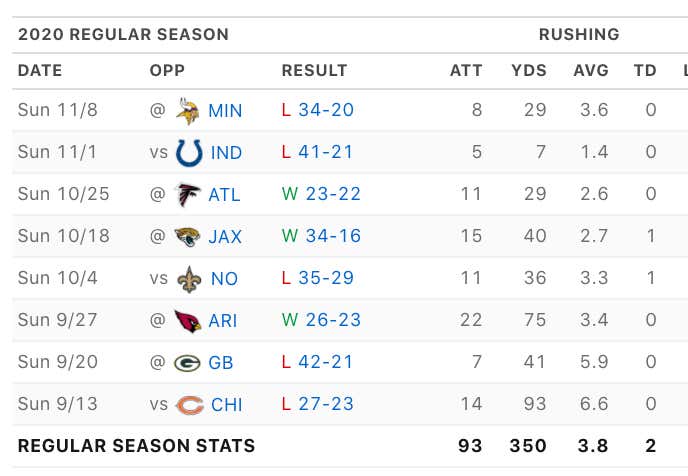 So Washington is going to "realize what they let go"? Well, I'd like to see it. Because I would certainly rather Peterson get carries than D'Andre Swift, whom I think will be a fucking superstar in due time. Maybe that's a hot take? I don't know, I just really like the cut of D'Andre Swift's jib. The Lions also have Kerryon Johnson, who I admittedly don't know if he sucks or not, but he looked great in 2018 when he nearly had 1,000 total yards in only 10 games, but now barely gets snaps at all. Maybe a Lions fan can help me out- does Matt Patricia just hate using his young running backs, or is Peterson truly the best option on the team? Because I find the latter very hard to believe.

Peterson isn't completely bitter though, as he did thank the WFT for saving his career:

"It was a great journey and great opportunity. They allowed me to show that I can still play this game at a high level," Peterson said, according to WUSA9. "I will always have love for the DMV area. It was critical for my career. It's a reason why I'm still playing in this league now at a high level."

I have a feeling this is going to be his final season, and what's crazy is he is still 4,000 yards behind Emmitt Smith on the all time leading rushing list. If not for those injuries where he played 1 game in 2014, 3 in 2016, and 10 in 2017, he'd probably retire on top. And by on top, I definitely just want to post a picture of him riding that camel at his birthday party.