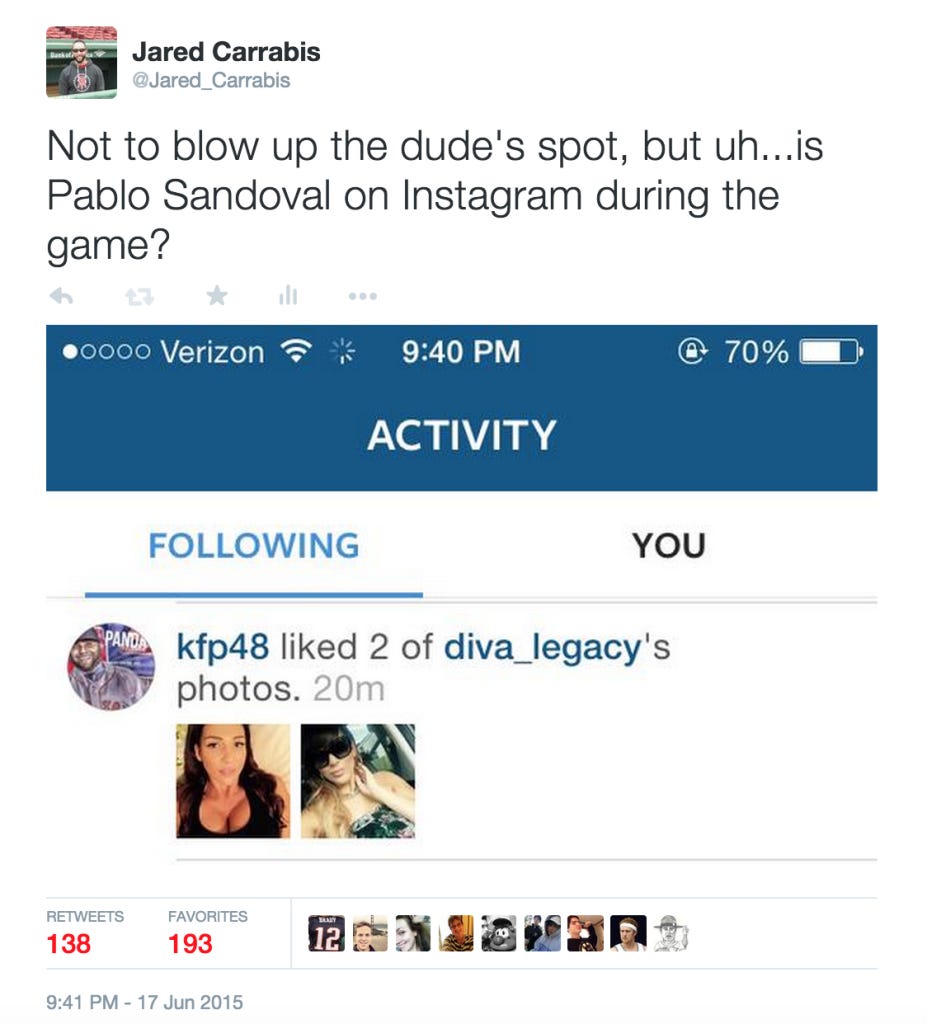 Well, this is awkward. Not to blow up your spot, but *blows up spot*. I just happened to randomly catch this while I was doing some late night creepin’ on the Gram, and figured I’d tweet it out, because people like to get mad about stuff like this. I didn’t think it was that big of a deal until it caught fire on Twitter, and then immediately became a topic of discussion on the Sports Hub and WEEI after the game. I’m sure they’re going to be talking about it on every sports radio show today, too. For what it’s worth, I got an email late last night that said Pablo Sandoval’s agent and his brother both have access to his Instagram account. But this morning on Dennis and Callahan, they determined that the timeframe lines up so that we know Sandoval would’ve been off the field at the time the pictures were liked, with Rusney Castillo at the plate with no outs, meaning Sandoval wasn’t due up for another five batters.

But since we know that there will be plenty of people who won’t believe the, “It was my brother/agent” excuse, let’s just assume it was Sandoval for a second. The bottom line is that I’m sure there are tons of dudes who are on their phones in between innings. Whether it’s checking some texts or flipping through Instagram while they’re taking a piss, I’m sure it happens. However, 99% of them are smart enough not to leave a paper trail like Sandoval presumably did. Did the Red Sox lose on Wednesday night because Sandoval was double tapping on some big titties, or did they lose because they were 1-for-7 with runners in scoring position, walked AJ friggin’ Pierzynski with the bases loaded and played shitty defense?

If it was Sandoval, should he have been on his phone during the game? No, of course not. But let’s not light our torches and gather up our pitchforks over this. Guaranteed, if the Red Sox were 15 games over .500 and in first place, everyone would be eating this story up, being like, “Sandoval, you dog, you!” Pres would be firing up the t-shirt machine, making “Packing Lips and Liking Pics” t-shirts, and we’d move on. Nothing to see here. But the team blows, so now everyone will run with this, and make him out to be the scapegoat for this terrible team. Brace yourselves; the comparisons to the beer and chicken fiasco are coming.