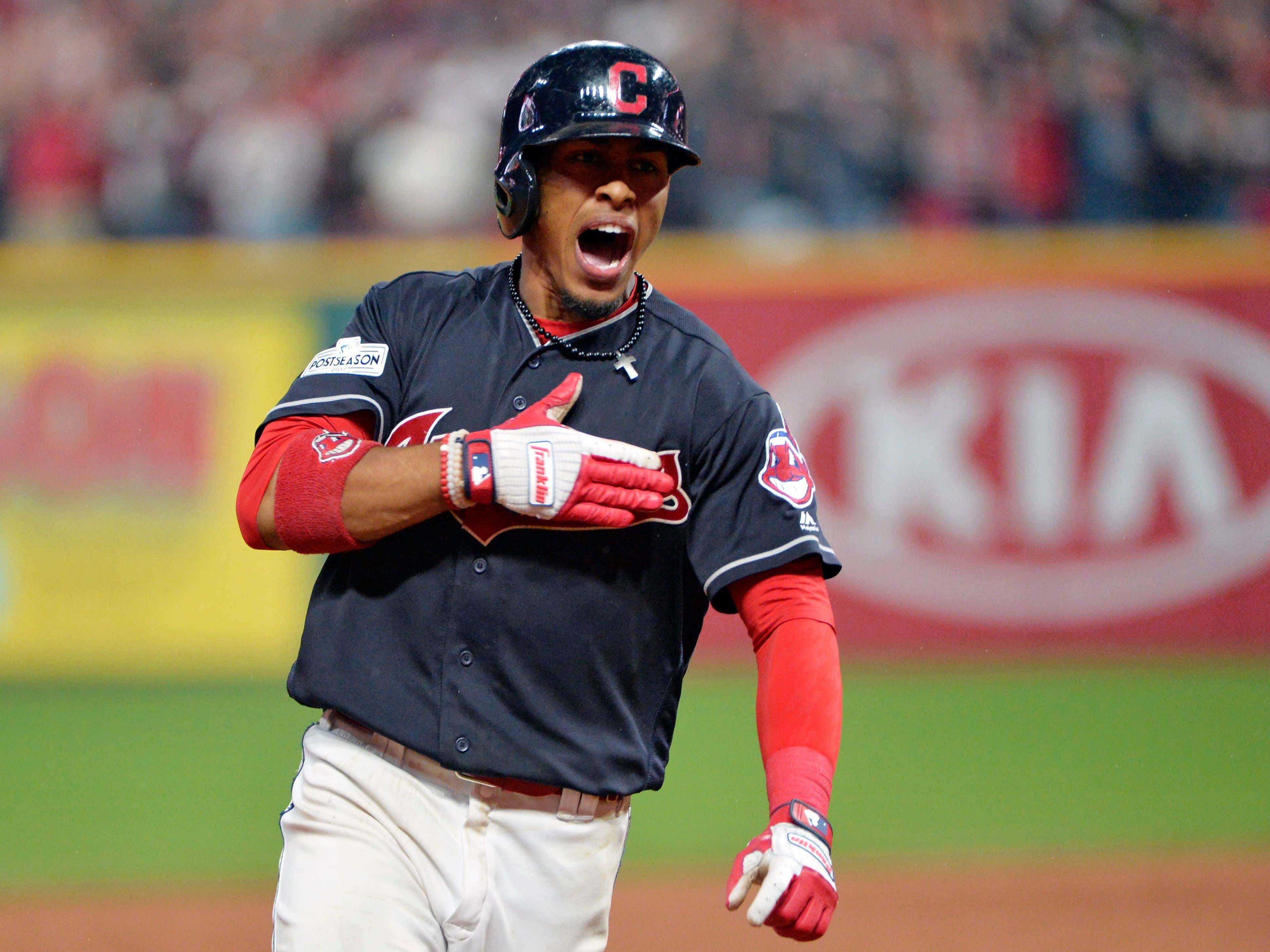 It's that part of the offseason where Yankees fans trick themselves into believing they can get their hands on every single player available. Free agents, disgruntled players, or guys who teams realize they're not going to give hundreds of millions of dollars to. Yankees fans, we're born this way and it's okay, it's in our blood. The most successful and richest sports franchise in North America should realistically be in on anyone who can improve the club. New York hasn't been back to the Fall Classic since 2009, you don't need to remind me. They've won one World Series title in 20 years, again no need to remind me. Gerrit Cole was added last offseason, but it wasn't enough. The offense remains unbalanced and righty dominant. The defense is nothing to write home about either, particularly at the shortstop position. Enter Francisco Lindor and the "report" that the Indians will be trading him before Opening Day of 2021. Naturally, Yankees fans will be licking their chops at the thought of a switch hitting, superstar, soon to be 27 year old shortstop on the block. But how realistic is it?

The Indians want Lindor gone. Paul Dolan, cousin of antichrist Knicks owner James, has made it clear he is not paying this franchise cornerstone a dime after 2021 is over. If it were up to him, he'd forgo his final year of arbitration and just cut ties with Lindor right now. Instead of doing that, Dolan is going to seek any kind of value to come back his way. The Yankees can certainly prepare an offer that will be worth Cleveland's while, but how could they make it work with the current construction of their roster. If you trade for Lindor you're locking him up for years to come. This ain't some stop gap SS to hold you over a season. No, Lindor would be a Yankee for life if he put on the pinstripes.

If Lindor is in pinstripes that means one of Gleyber, DJ, or Voit are gone. Now you look at those names and I bet you're going to bid Voit farewell. No matter how great of a season this guy has, Yankees fan will seemingly turn on him in a second. It's truly remarkable the lack of credit they want to give this man. This motherfucker led the majors in homers in 2020 while playing on one foot. He gutted out the second half of the year, refusing to sit out, because he wanted the Yankees to win. Since becoming a Yankee he's hit .279/.372/.543 with 57 home runs and 147 RBI in 213 games. He's the heart and soul of this team as far as I'm concerned. The vocal leader when no one wants to be held accountable. Luke Voit is everything you could want on your team, but it's never going to be enough for fans.

You look at this roster and you have to bring back DJ LeMahieu. You cannot watch what he did the last two seasons in New York and allow that man to play anywhere else but on the Yankees in 2021 and beyond. The thought of him in Queens or Tampa is a suicidal one. Gleyber Torres is 23 years old. 2020 was rocky for him and the defense continues to be an issue, but he's one of the more untrade-able assets in the entire league. Would you prefer to switch him back to 2nd base? In a perfect world yes. It's just very hard to do that with DJ and Voit in the mix.

So how does Lindor fit on the roster? The dream scenario would be trading Giancarlo Stanton and his 7 years left on his deal that he just opted into. Not happening, especially with his no trade clause. The guy loves this team and loves New York. He's not going anywhere. If somehow you were able to hypnotize him and get him to okay a deal, moving Voit to DH, DJ to 1st, Gleyber to 2nd, and bringing in Lindor to play short would be the wet dream scenario. It's a nice thought, but it's a pipe dream.

Giancarlo not being able to play the outfield really fucks the flexibility with this team. He's the DH moving forward until his time in New York is over. That hurts Voit more than anyone in my mind. The way I see it, the only way a Lindor-Yankees deal happens in a realistic sense is if Luke Voit is traded and that would break my heart into a million pieces. I'd feel empty inside. From a baseball perspective obviously you're choosing 26 year old superstar shortstop Lindor over a soon to be 30 year old first baseman/DH Luke Voit. That would also mean paying Lindor AND DJ with Judge's contract up in two seasons. After paying Cole, I don't see them doing it.

I also think there's a ego thing here with Brian Cashman finding Voit outta nowhere in St. Louis. That's his guy he wants to hold on to and show the world how smart he is. I mean Luke was an MVP candidate for most of 2020. Until his injury in 2019, he was the starting first baseman in the All Star Game. Luke is Cash's guy and I don't know if he want to see him go.

At the end of the day does Francisco Lindor fix the Yankees offensive issues? Without question. He's the perfect addition to this team. Switch hitter, great fielder, contact, low strikeout numbers, speed, marketable, charismatic, and young. What will it cost? Heartbreak, key players, and lots of money. You're either not signing back DJ LeMahieu or you're trading Luke Voit. I haven't even began to thought about what the haul would be for the Indians. You have to imagine virtually every team in baseball will want his services. Steve Cohen's Mets will be big players for the SS and I'd put them as the heavy favorites considering the new owner will want to make a huge splash.

So what's going to happen? DJ will resigned. If he isn't then you can expect a full court press for Lindor, but I don't see it. Voit will stay considering his production and four years of team control remaining. Gleyber will be the shortstop to begin the season, but his leash will begin to shorten. Maybe a Brandon Crawford is brought in as insurance? I just don't see the Yankees wanting to pay both DJ and Lindor. George might've, but he's not here anymore. Getting Hal to sign off on Cole was hard enough.

I think bringing in a Charlie Morton on a two year deal would be awesome. I don't see Hal going hard after Lindor, especially if there's a bidding war. I'm looking to improve the bullpen in the offseason. I've had enough of relying on the likes of Holder and Cessa late in the year when a guy or two is banged up. I want Brad Hand and Liam Hendriks. I want to take a low risk high reward shot at Corey Kluber. As much fun as Frankie Lindor would be as the shortstop of the future of this team, it's a pipe dream and nothing more in my mind unless something radically changes.