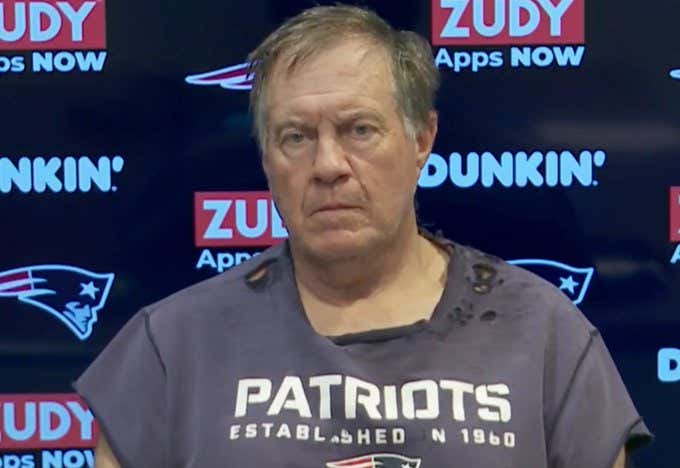 Not 24 hours ago I posted about how the toner-stained, slump-shouldered jackals in the sports media were taking advantage of the Patriots current lowly condition and pouncing on Bill Belichick. Complete with pretentious Shakespeare quote and overblown comparisons to Lincoln and Jesus. Because I was that fired up.

They've been waiting forever for the Patriots to be down enough that they could settle old family business, and weren't about to miss their opportunity.

And it was just last week that Bart Scott became the first mediot to call for "Bill the GM" to get fired.

Though, like I said, he'll by no means be the last.

To review, here's what Belichick said in his contractually obligated weekly appearance on WEEI Monday:

“Look, we paid Cam Newton $1 million. I mean it’s obvious we didn’t have any money. It’s nobody’s fault. That’s what we did the last five years. We sold out and won three Super Bowls, played in a fourth and played in a AFC championship game. This year we had less to work with. It’s not an excuse, it’s just a fact.”

And here's a random sample of what The Athletic was told:

“It seemed very un-Belichickian to say what he said. You are the coach and GM. You have made all these decisions unless there is a veiled message, which could make you think about what they’ve spent. … It is not a cap issue. They have been tight against the cap in moving money around, but lots of people have had the ability to do that and go through it.” - Anonymous executive

“Bill is saving up for next year and blowing smoke and hoping people believe him, crying poor, whatever. There is nothing to it. He knows it. They got stuck when Brady called their bluff and left. They didn’t improve the team and Brady said he’s out, going to go get some sunshine, bring his boy Gronk out (to Tampa Bay), have some drinks with the head coach and have some fun and call it a career.” - Unnamed coach

“I have always wondered if they just decided to tank this year, especially once they had the opt-outs.” - Unknown front office guy

“Belichick has really run it tight economically whether it’s been players or staff or coaches and I think that has probably finally caught up to them. The cap is an excuse. The cap to me is hiding really that they haven’t spent cash. And it’s not just players. I wonder to some degree whether they’ve had a little bit of a brain drain. Everybody focuses on the coaches who have left not being successful, but (Titans GM) Jon Robinson, (Bucs GM) Jason Licht and all these other guys have left also.” - Another exec who also asked to remain in the shadows

“I saw that and I thought, why is it out there? Bill never would put anything like that out there, and all of a sudden it’s out there. Something is weird.” - Former head coach who refused to put his name to his quote

You know what's also "un-Belichickian" but not at all weird? The flat out refusal of these cowards to step up and publicly say these things like men. These duplicitous, timid weasels whispering to a reporter the minute they sense weakness and then slithering back into their holes instead of standing up and being counted. I expect nothing less.

To repeat what I said before, this is only the beginning. Generations of these incompetents have come and gone. Countless times they've been dragged into their team owners' offices to explain why they're 2-5 or whatever, and had to answer why they can't build a consistent winner the way Belichick has. And in these thousands of conversations they've claimed he was just lucky. Or bent the rules. Or flat out cheated. They've lobbied the league to take away draft picks in hopes of leveling the playing field just a little. Signed away his veteran players hoping to instill a little bit of the culture he's created into their own locker rooms. Hired away his coaching and personnel assistants in order to gain his insights. And still he's continued to win while their success has either been fleeting or non-existent.

Yes, Tom Brady looks incredible right now while Belichick looks vulnerable. Brady's team is racking up victories while Belichick's is accumulating mistakes and missed opportunities. But if anyone really thought this was going to be the state of things going forward and the Pats would never recover from it, then they wouldn't be afraid to call him out publicly. If they truly believed The Hooded One hadn't seen this day of reckoning coming and prepared for it so this downturn would be temporary, they'd allow their names to be attached to their bold words.

Say what you will about how he's handling this and rip him for making excuses. But just recognize the irony of him answering questions openly and honestly while taking grief from nobodies hiding behind anonymity.