"I don't have any more information than that as of right now"......

This has been the case the first two weeks of the season as well. Moore has missed the first two games for...really kind of mysterious reasons. Yes, he hurt his hamstring last year, but that was over 13 months ago now.

I've talked time and time again reminding you about how Moore initially opted out back in August, then opted back in in September, and now in October heading into November he's...vanished. Luckily Purdue is 2-0 and has seen elite, ELITE play from Sophomore star David Bell as well as major improvements from fellow Sophomore Milton Wright, but damn can we get at least more than "hope to have him back soon"?

Take it for what it is because it's obviously Reddit, but this was brought to my attention this morning regarding the status of Rondale Moore. 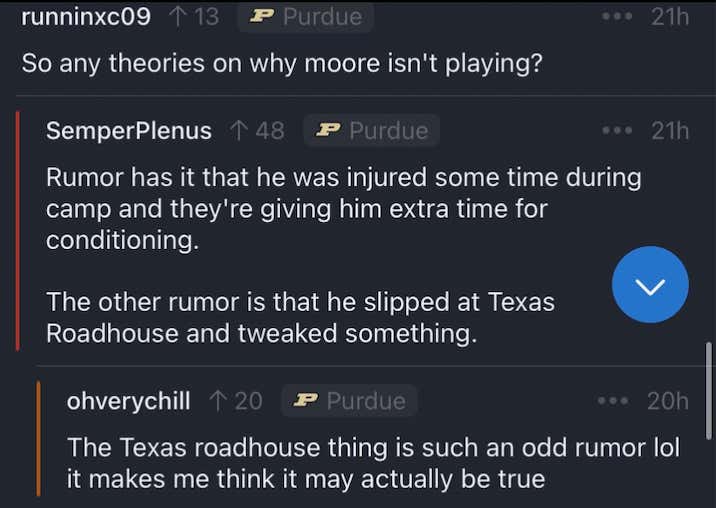 Obviously again take that with a grain of salt. It's a Reddit rumor, but as someone who resides in Indianapolis I'm become very accustomed to wild injury rumors being true thanks to ol' Andrew Luck and his snowboard.

Who knows. It's odd. It sucks. It's frustrating being that excited that Moore would be back alongside Bell for a lethal receiving duo and now there seems to be no answer in sight as to when that will happen.