It wouldn't be a Barstool Halloween contest without major drama. Two years ago, we had the great like buying scandal that nearly tore our country apart. Multiple posts seemed to be getting random boosts of likes that could only be explained by like-buying. Ultimately, we had to just give the prize to the girl with the most likes because there was no concrete way to prove who was buying likes, and there were so many accounts in question that it just became a gigantic mess. It was a dark day for an otherwise pristine American institution.

That was my last year running the account. I gave up the reigns in February 2019. Last year seemed to run pretty smoothly. Kyle took it over and has done a great job. I thought maybe 2018 would just stand alone as a singular black eye on the competition. It appears that is not the case.

While I am not the one going through and posting all the pictures, I still have been overseeing the competition this year. I round up the posts for a blog every day and have been keeping an eye out for any funny business. Sunday, I was looking at the top liked posts and noticed two way ahead of the rest. 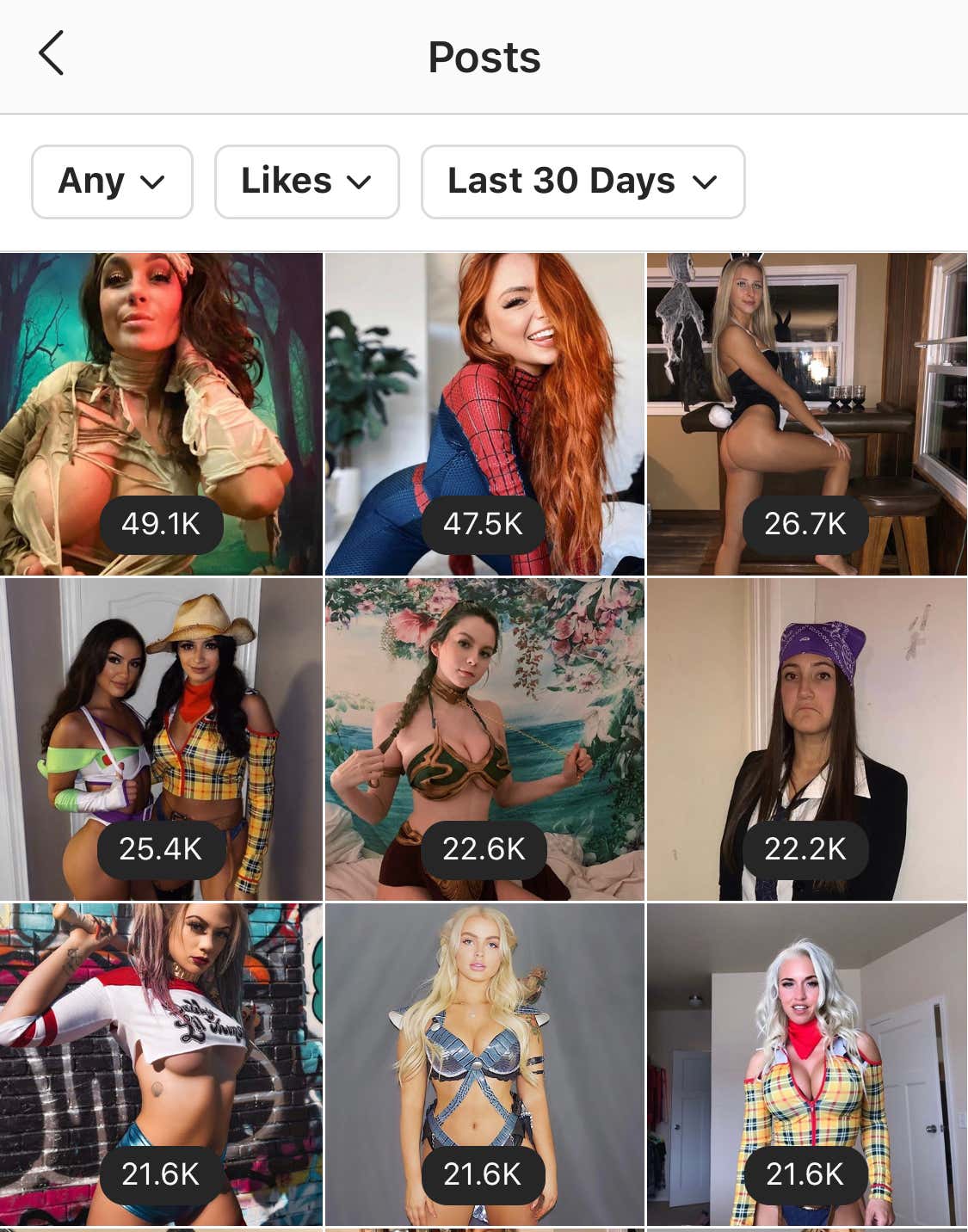 Clearly, there are only two posts with a real shot of winning.

I browsed the comments of these two posts and saw the drama unfolding.

The cheating allegations against Hoppy Floppy, the current frontrunner, began in the comment section of her photo. 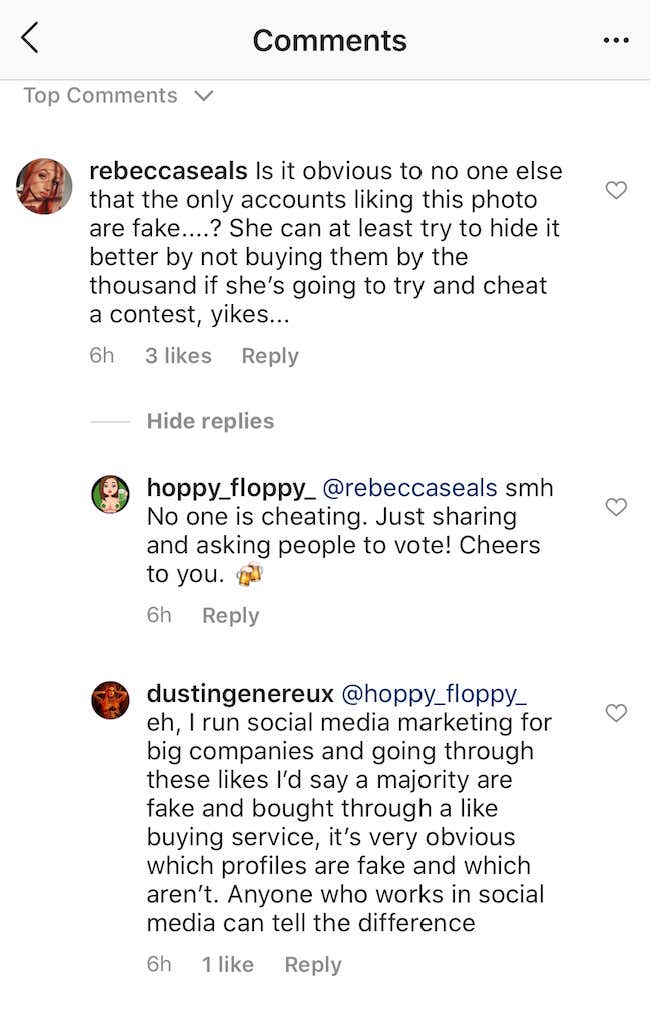 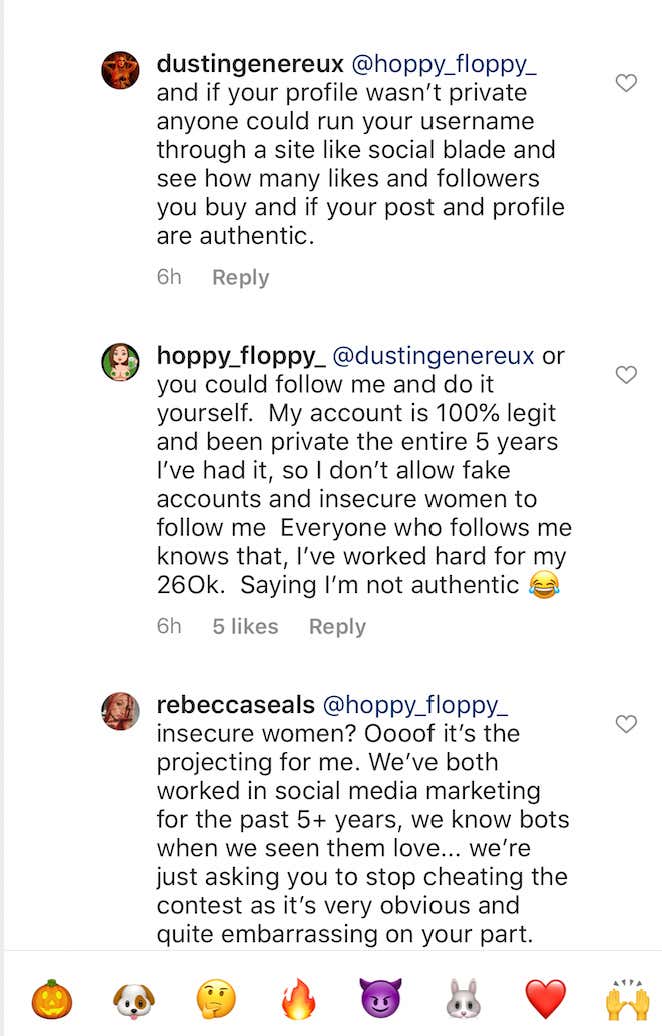 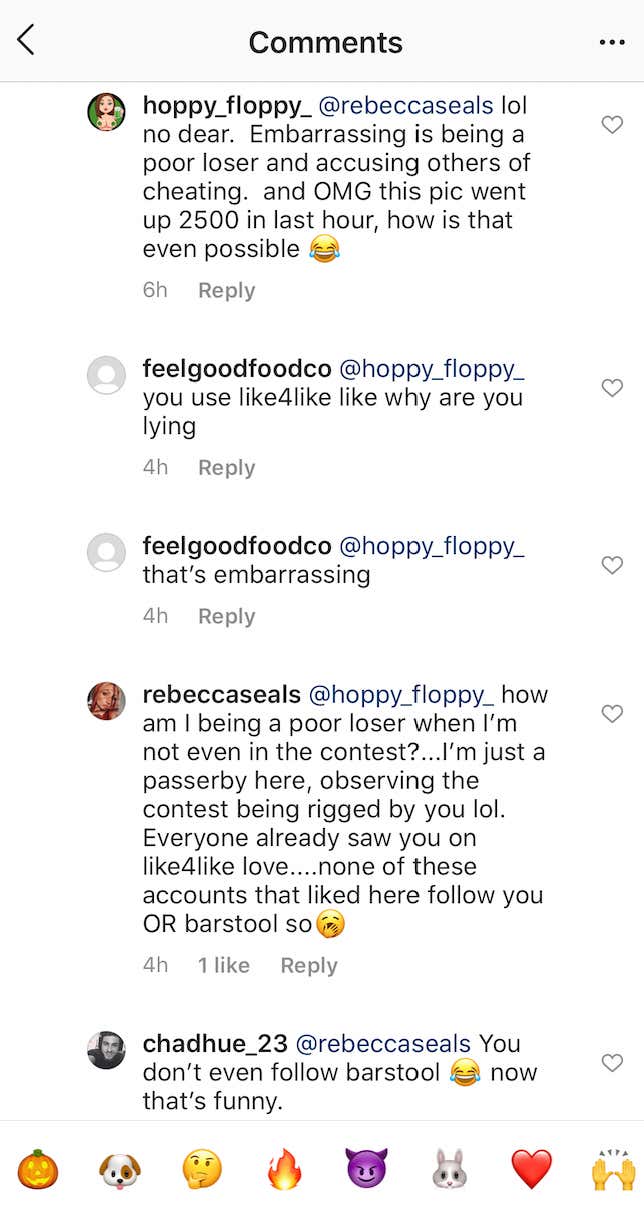 And that's when Spider-Man, @caitlinchristinee, entered the mix. 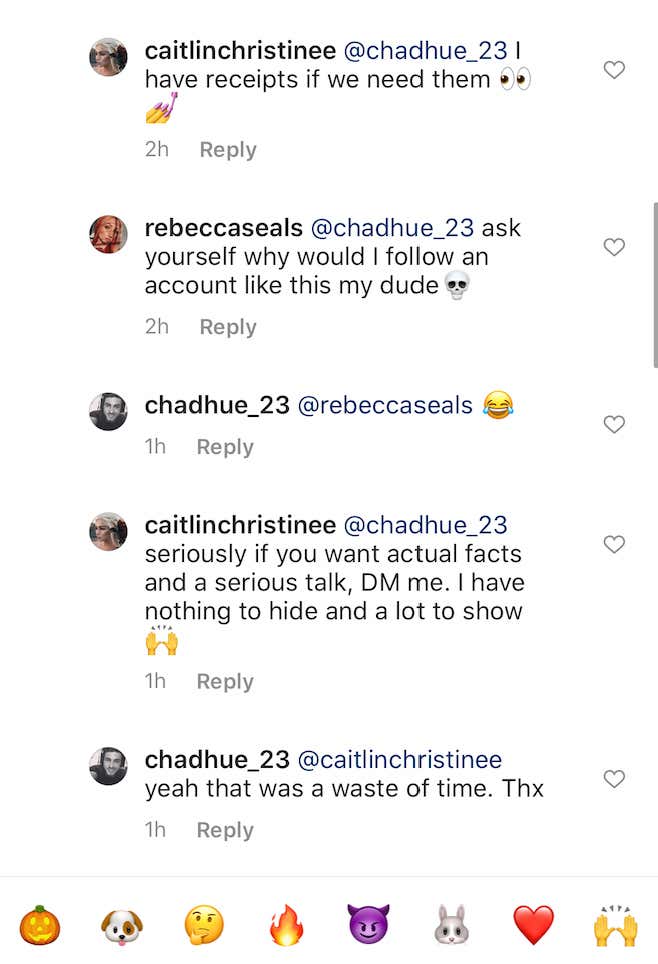 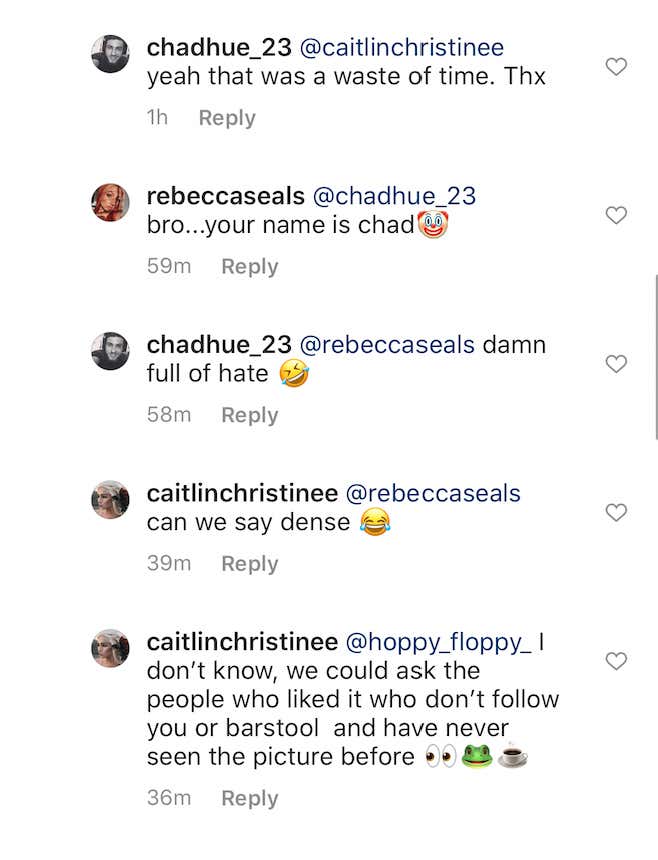 (A major ricochet shot at Chad)

So basically Caitlin thinks Hoppy Floppy is buying likes and did some research to prove it. Like any good journalist, I reached out to both parties to get their sides of the story.

Here is Caitlin's side of the story.

"I got posted a few days ago and really started gaining traction which was exciting! I was watching both posts when I was about to pass her, then she gained 2,000 likes within 15 minutes which was SUPER weird because she wasn’t gaining like that all day and to gain that much so fast… it needs to be viral. Regardless, I pushed more to my followers that night and passed her by thousands… I woke up the next day overnight and she passed me by thousands."

"Weird. Again, I brushed it off and passed her again. That’s when on Halloween I refreshed her post after just being on it 5 minutes prior… mind you it was 1 in the morning… and she had not posted anything… and she gained 1,500 likes. That was a GIANT red flag. I messaged her in the morning as politely as one can when asking if they’re using a liking service and she got defensive and essentially could care less what I thought. So it out the fire in my belly to find the truth because I knew in my gut there was cheating." 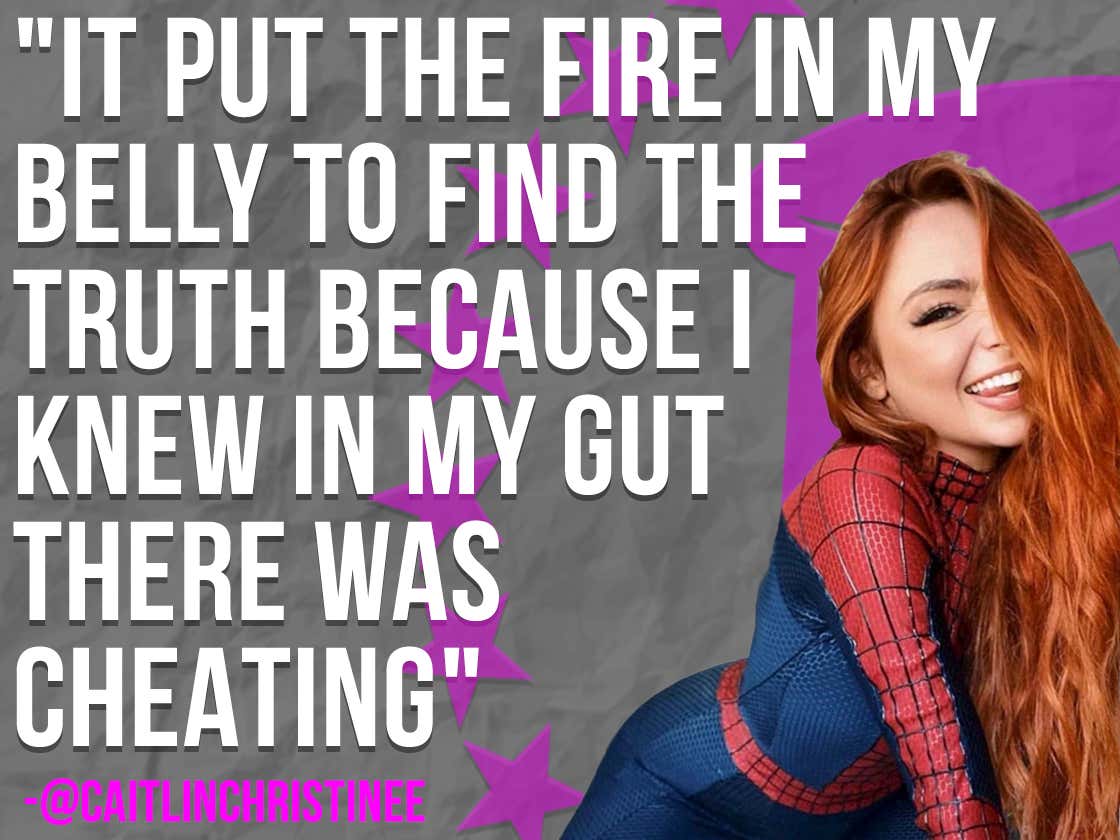 So Caitlin decided to reach out to the most recent likes of Hoppy's photo and prove that they were purchased through a program called like4like. These are the screenshots she provided me. The people in the messages liked Hoppy Floppy's photo on the Smokeshows Instagram account. 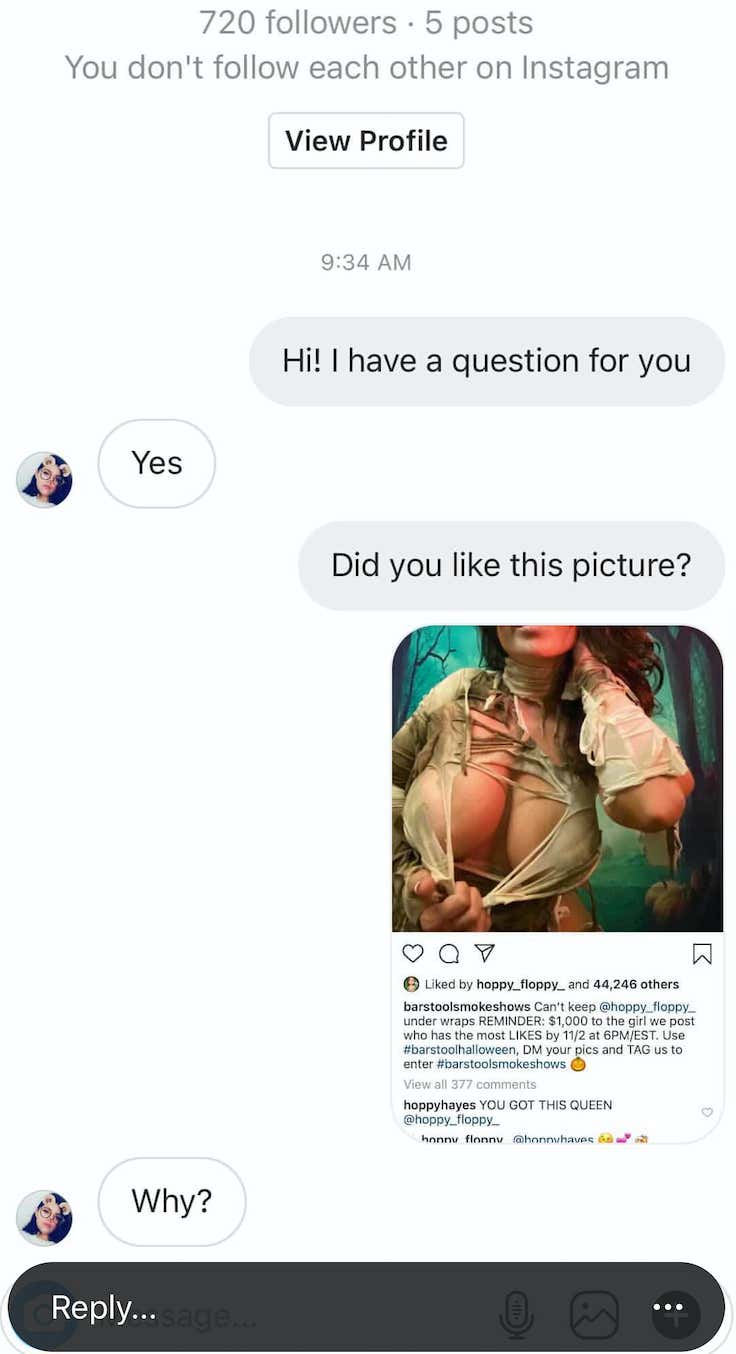 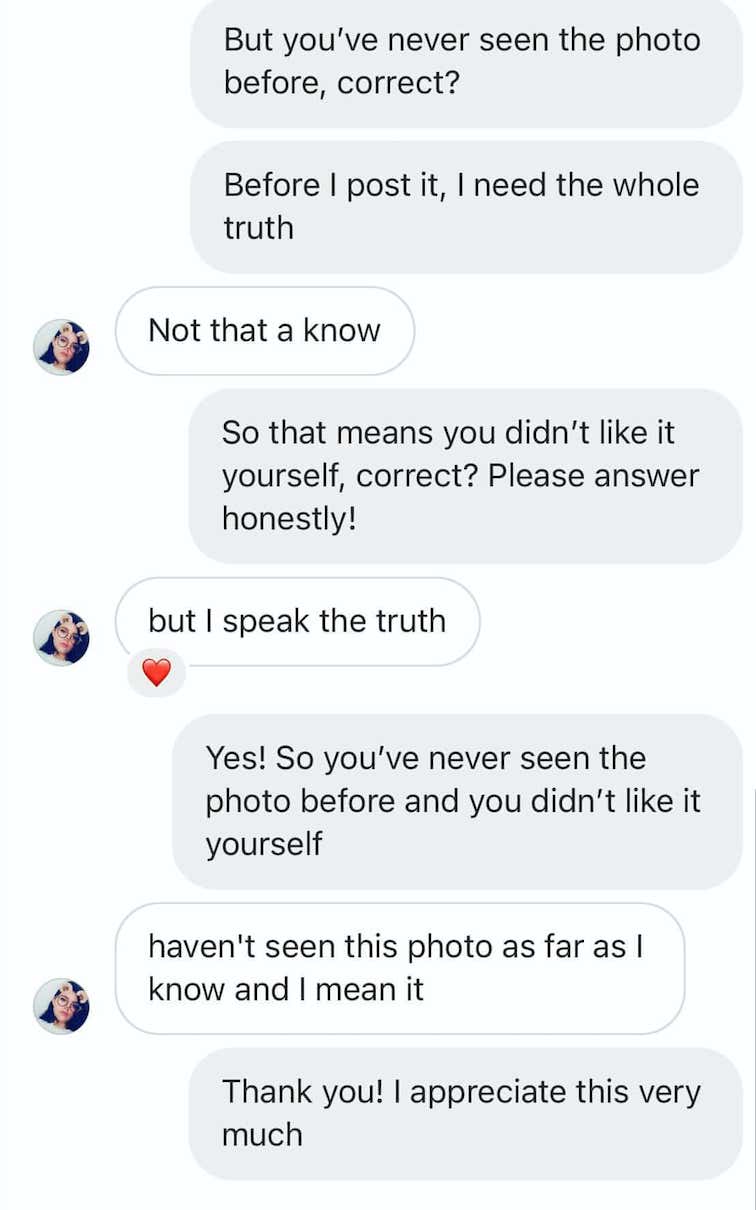 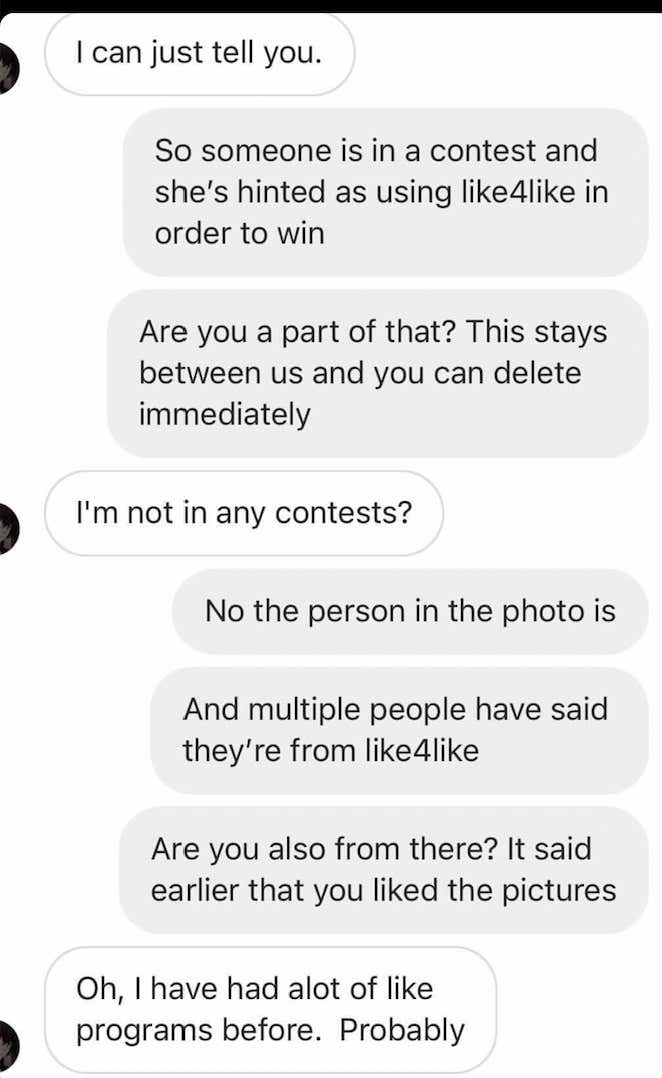 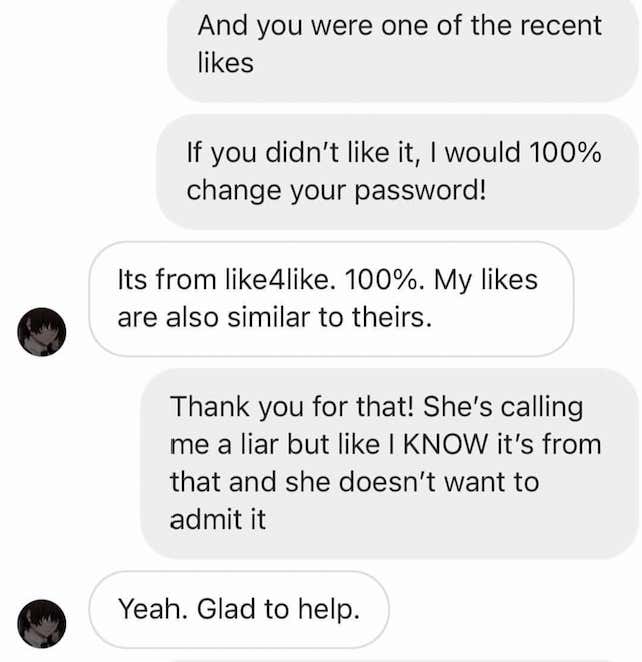 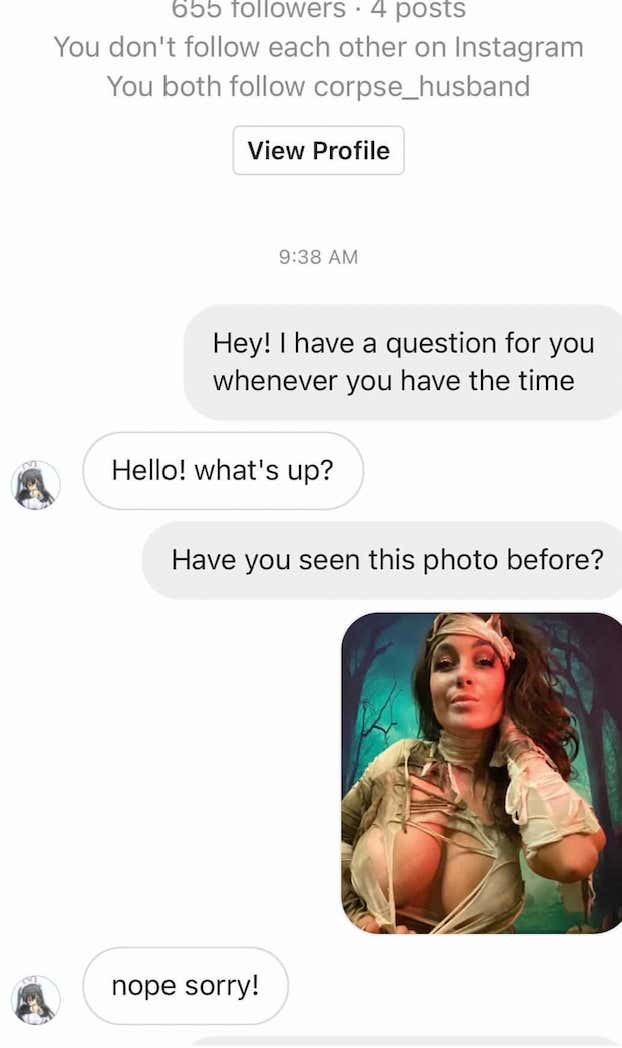 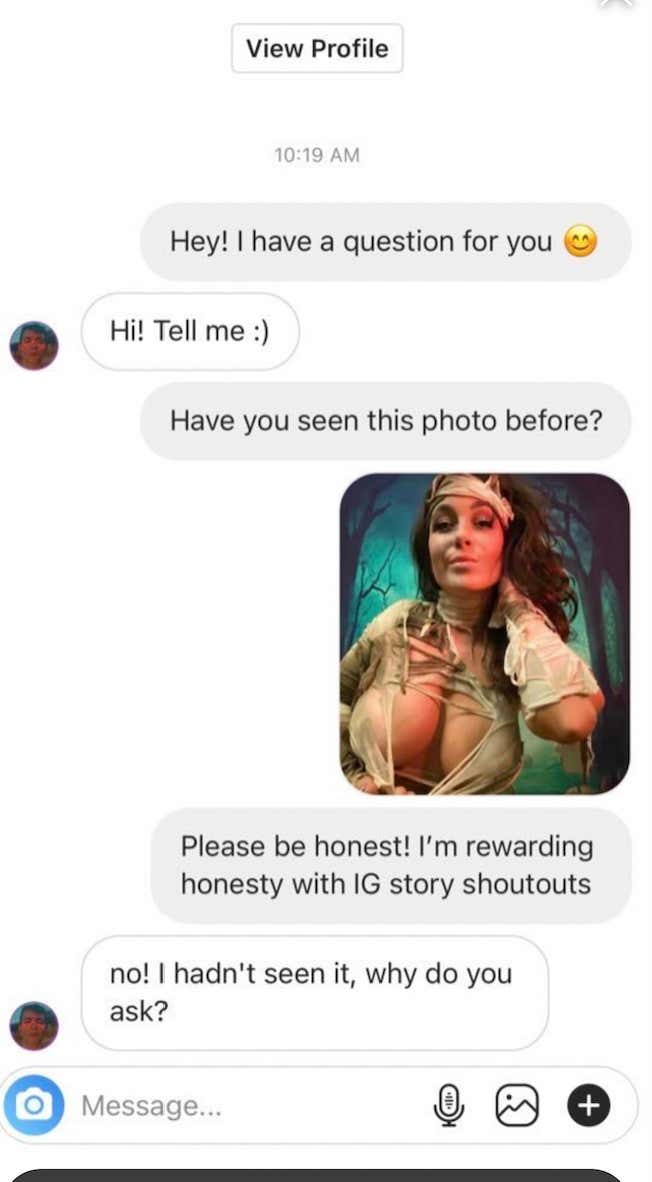 So Caitlin's theory is that Hoppy used a program similar to like4like which automatically likes photos in exchange for likes on your own account. People wouldn't even know that they liked a certain photo because the program automatically does it for them after they sign up.

I had to reach out to the party in question, Ms. Floppy, to get her side of the story. She vehemiently denied the cheating allegations.

"Definitely no cheating from me. I've just continued to promote the same way she does. And I have no drama. She just appears to be a sore loser." 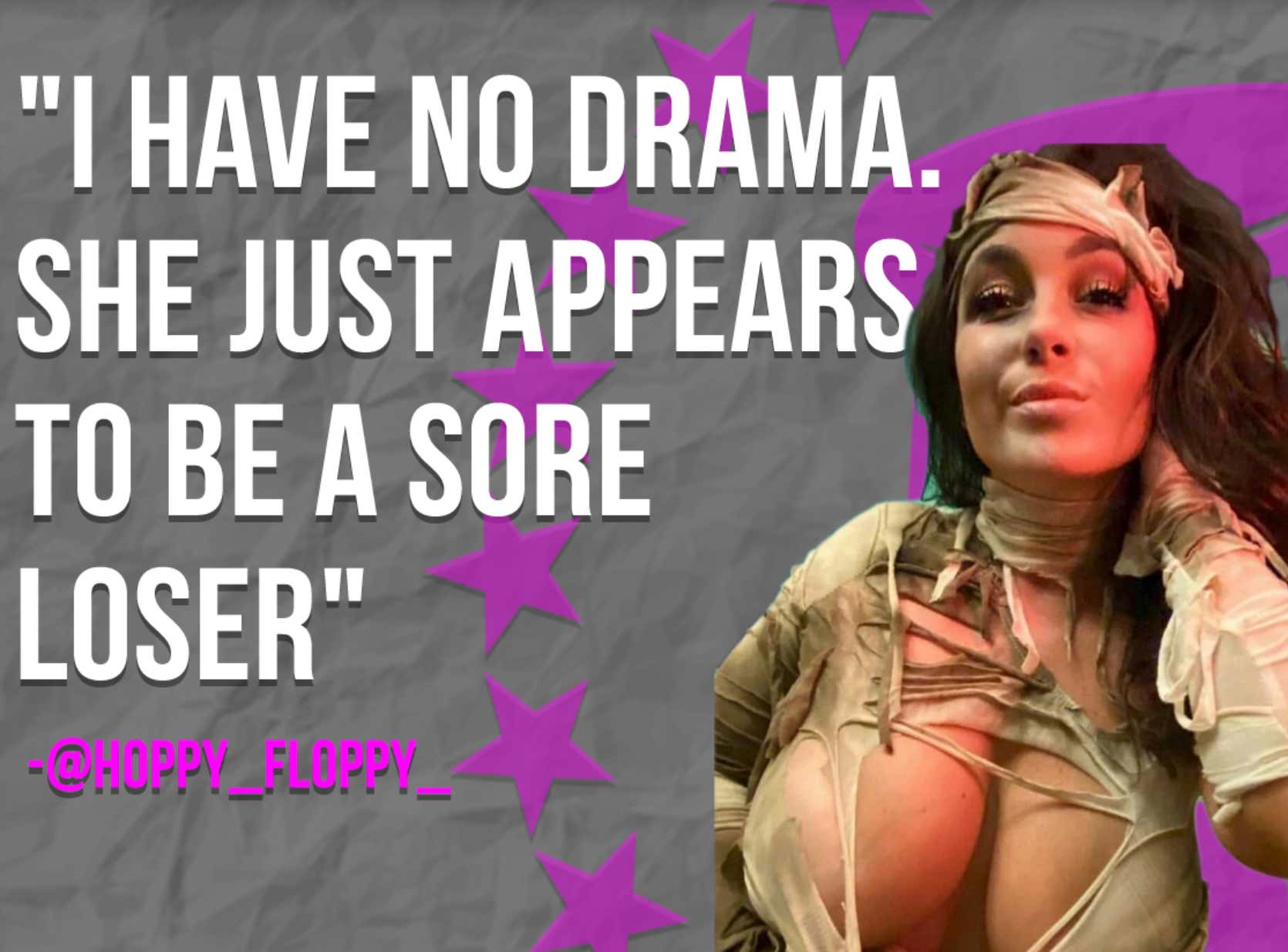 She wanted to make it clear that her account is all authentic. She said she's worked hard to build her following and has been tirelessly working to promote the contest.

"I have a strong community behind me. I have no reason to hide anything. My beer community has been coming in strong with liking and sharing my posts. I know that I have worked hard to build my private account for the past 5 years and have a huge following here that I have worked hard for. Contacting people regarding photos they have liked seems a bit extreme. I clearly have promoted this photo the same as everyone else and have a huge fan base to back me up."

She did provide multiple screenshots as proof of her networking. 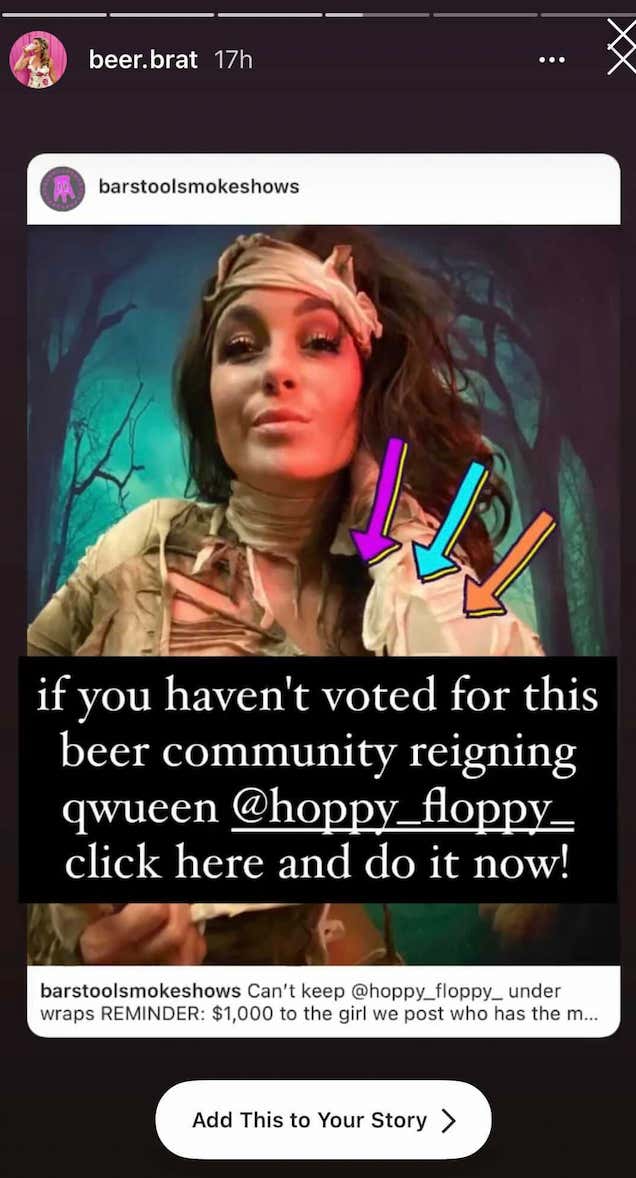 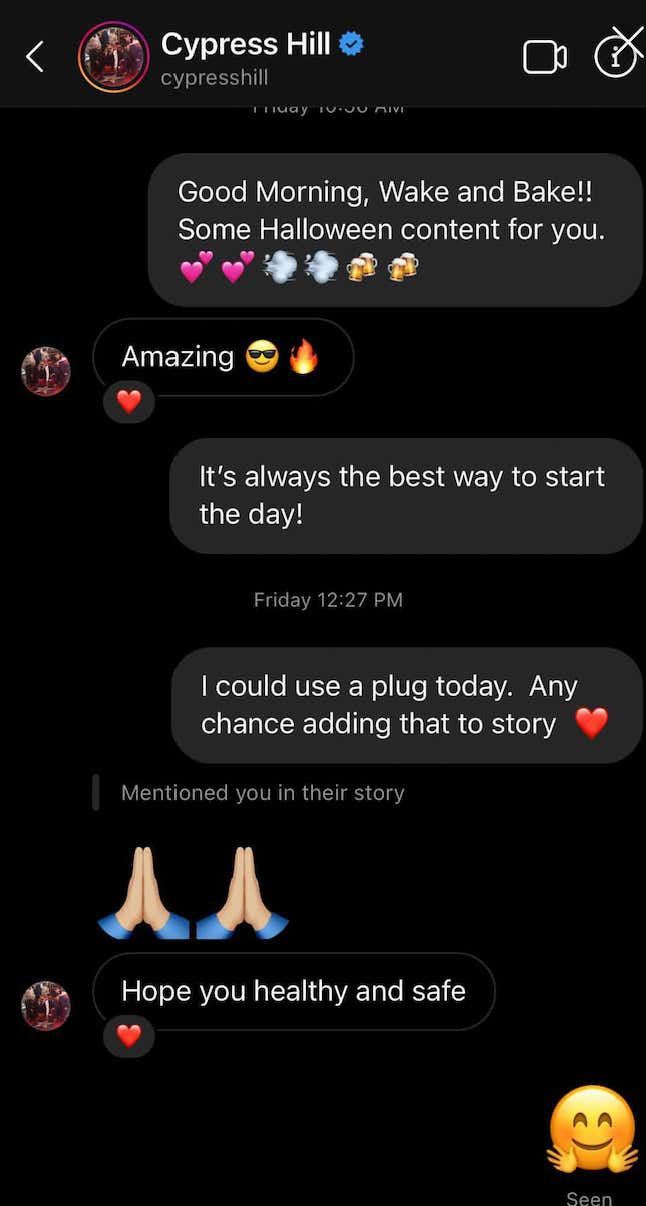 That Cypress Hill account has 1.9M followers and could certainly lead to a boost in likes. While some would argue that's not in the "spirit of the competition", you can't knock the hustle. Using all resources at your disposal to get a competitive advantage is certainly fair game.

As for the proof that Caitlin provided of bot accounts liking her post, she said, "I'm sure if I took the time, I could take screenshots of other accounts on other photos that are bots. But I don't do bots." 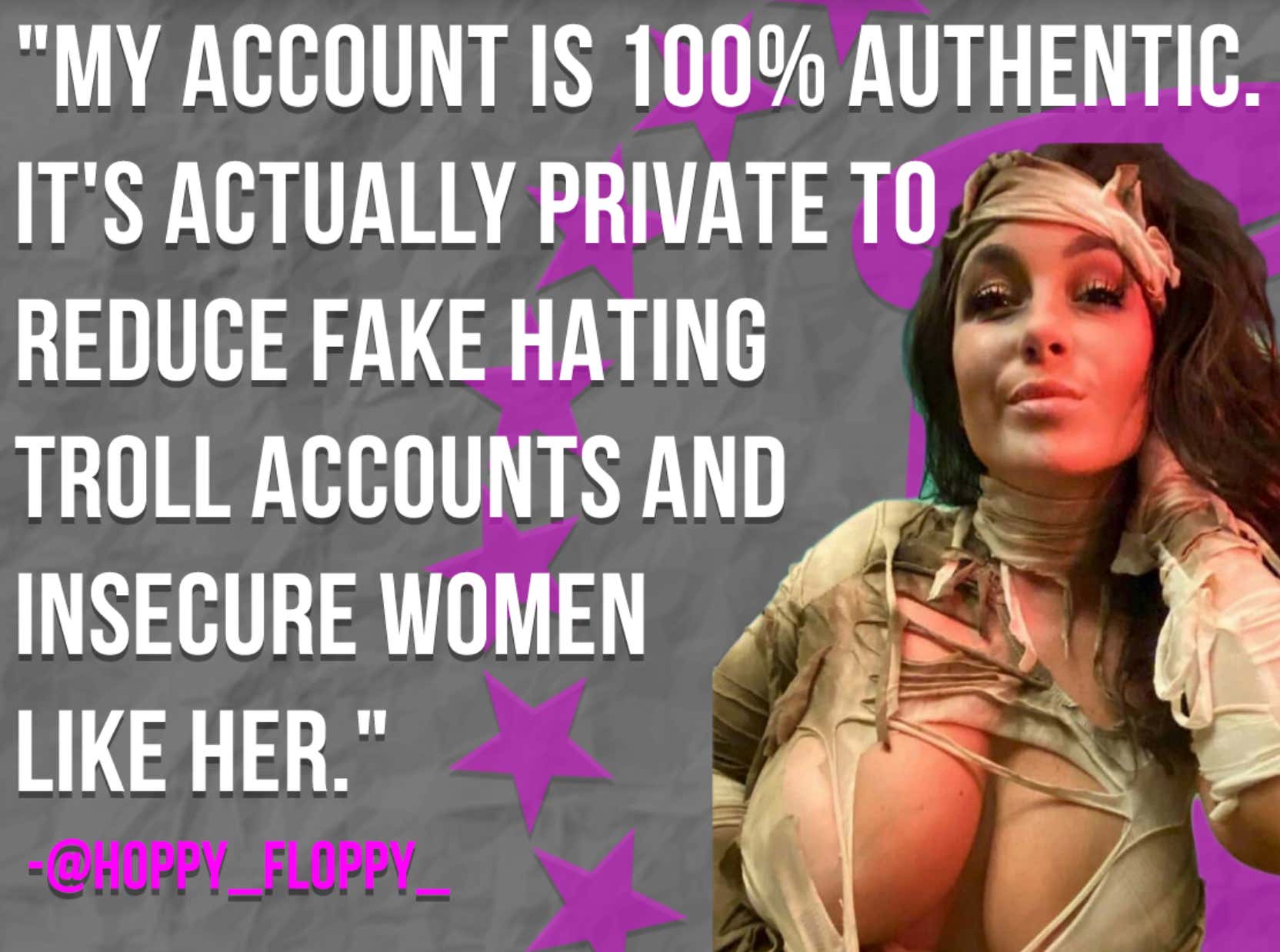 It's clear there's bad blood between these two fierce competitors. I was provided with screenshots of the DM exchange between the two and there wasn't a whole lot to see. Caitlin presented her evidence and Hoppy denied using any bots, citing her large following and aggressive promotion.

So where does that leave us? Hoppy Floppy seems discouraged about the whole thing.

"This is so sad to have to have this conversation and defend myself for something like this. Never in my 5 years on Instagram have I ever experienced this. I build everything I have for my love of beer and photography. It's absolutely crushing. But I'm strong hearted and won't let this tear me down. I'll keep pushing and hope it all works out."

Caitlin is still aggressively promoting and pulling out all the stops. She has even gone the charity route! 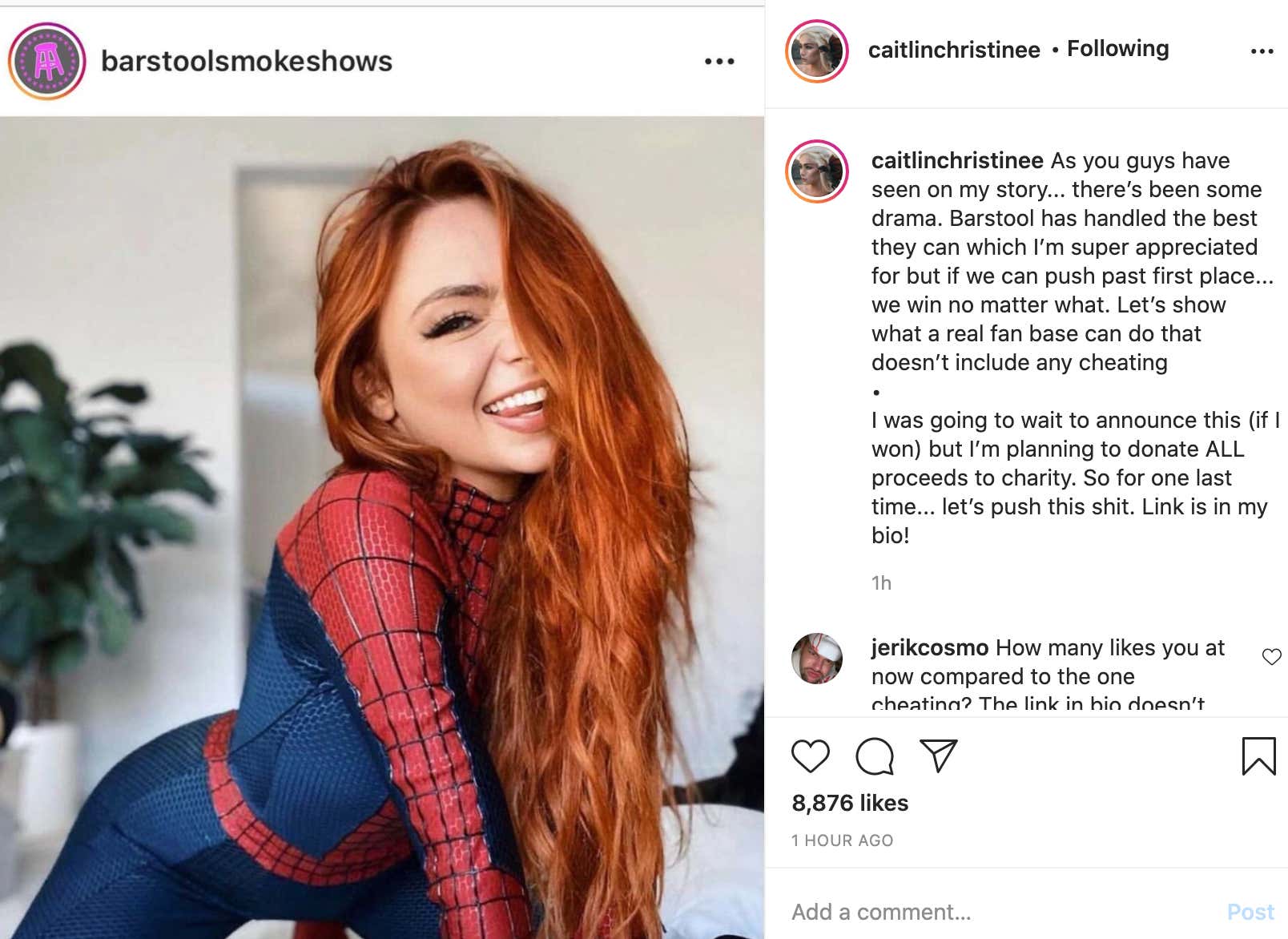 AND MY GOD SHE HAS TAKEN THE LEAD.

Due to Jenga, The Rundown, and meticulous reporting and journalism on my end, this blog has taken 4 hours to write. It is now 3:40 and these are our standings. 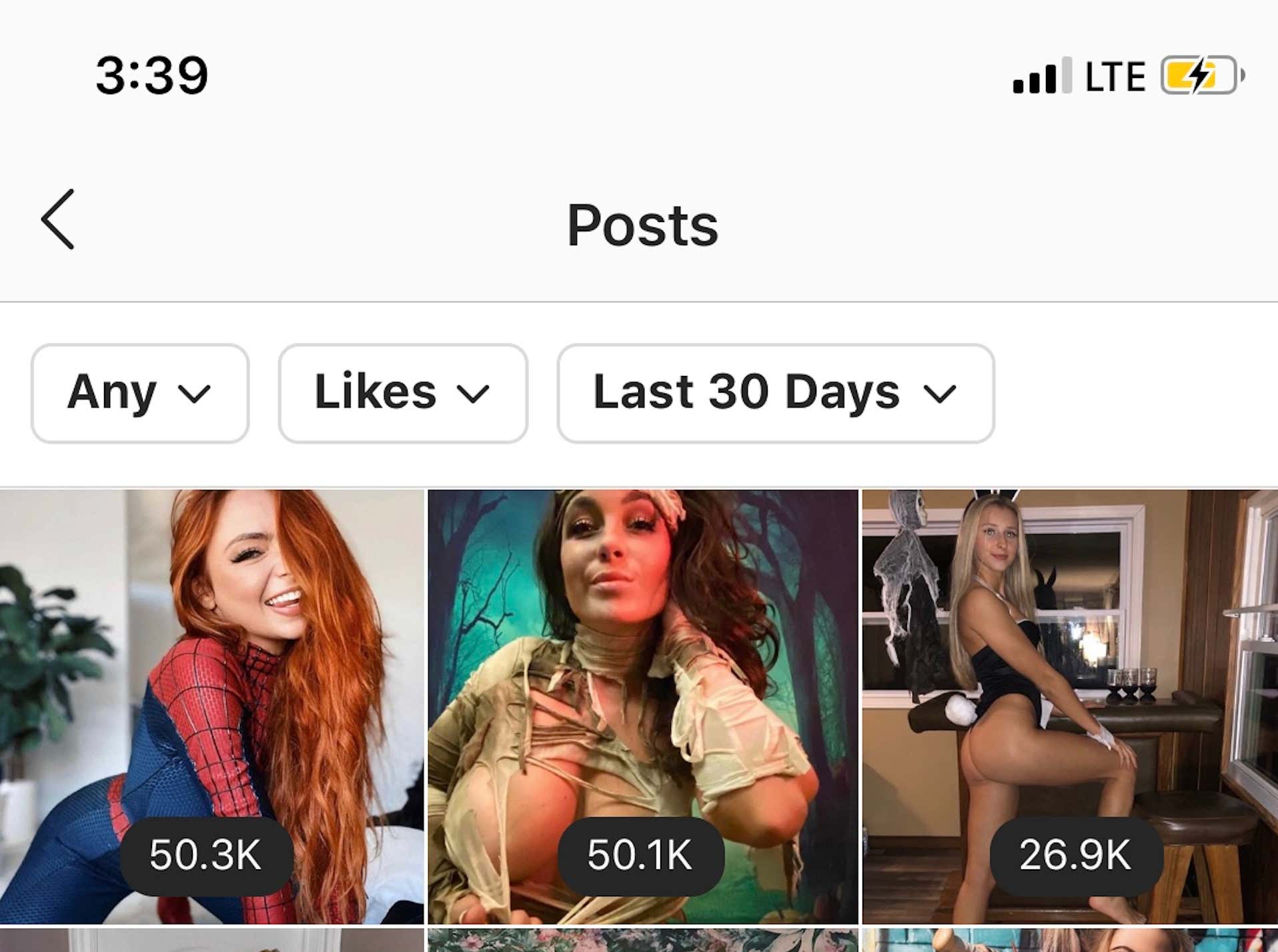 The contest closes at 6 so this should be a thrilling finish.

I have told both parties that whoever has the most likes at 6 PM EST will ultimately be the winner. The problem with buying likes is it's almost impossible to prove. Even if the evidence Caitlin provided says there are weird bot or purchased likes on Hoppy's post, that doesn't mean Hoppy bought them herself. Technically speaking, you could buy likes for a competitor's post and then try to say they should be disqualified for cheating. I'm not saying that's what happened here, but it's just a really slippery slope.

The girl with the most likes will win. Those are the rules. It's clear both are pushing hard for the victory, and I respect both of their competitive spirits. There's still two hours to go. Anything can happen. If you want to have your voice heard, get out and VOTE.

May the best smoke win.