There is a full slate of boxing scheduled for this weekend spread out over multiple days and locations.

Why are there so many different matches vying for our attention?

Well, because boxing is keenly aware that fans of the NHL, NBA, and now Major League Baseball are all in their respective off-seasons.  Plus, there is a definitive asterisk next to these COVID-affected College and NFL seasons.  SO, outside of The Mandalorian and Trevor Lawrence medical updates, the average sports fan doesn't have a ton to watch until kickoff Sunday afternoon.

(Shoutout GC in The Mando)

There are four major boxing cards over the next 2 days (plus an MMA event that's having a tough time making weight). I am going to briefly run through tonight's Main Event and tomorrow's early action, and then will follow up on tomorrow's later bouts after all the results are in from weigh-ins and press conferences… I also sat down for an interview with arguably the biggest name that is occupying a ring this weekend, Gervonta "Tank" Davis, which I will attach to tomorrow's Preview Part II.

Not a huge story line for this one… Jaime has been a part of Golden Boy's stable for a few years now, but this will be only his second fight under new trainer (Hall Of Fame fighter, Erik Morales).

Mungia's former trainer was a gentleman named Robert Alcazar who apparently was trying too hard to mold Jaime into the next Oscar De La Hoya… Not a bad thing to become, except Alcazar's approach made for some boring fights that didnt capitalize on the Tijuana native's ability to play the role of a classic, Mexican-style pressure fighter, who gets inside and breaks down his opponents with an array of body shots. 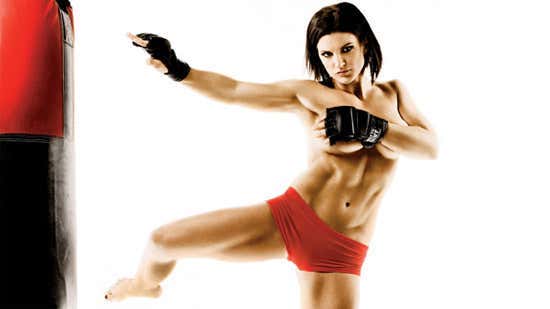 Morales has certainly been more affective in unlocking Jaime's "inner mexican", and Munguia (-500) should have no problem ending tonight's fight early, but I am also hoping Jaime can get back to that form he showed in 2018, where (as a last minute replacement that nobody liked) he manged to brutally walk right through an established champ named Sadam Ali.

Jaime laid some fucking heavy hands all over Ali that night, including this devastating lead-left hook…

He knocked the defending champ down 6 times over 4 rounds before the ref finally stepped in… I could see a similar performance for Munguia tonight vs Johnson.

Moving over to tomorrow's early card which is headlined with former undisputed cruiserweight champion Oleksandr Usyk (17-0, 13 KOs) in only his second bout as a heavyweight as he faces veteran Dereck Chisora (32-9, 23 KOs) at Wembley Arena in London (DAZN, 2 PM EST Saturday). 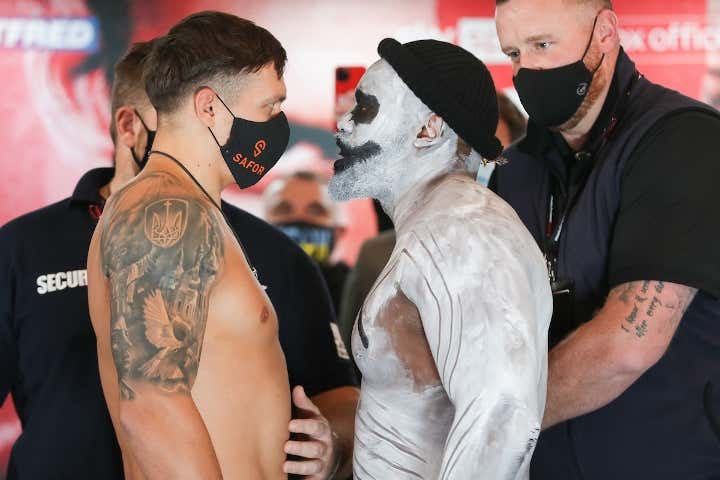 For those who hear the underdog's name, and say to themselves, "I think I have heard of Dereck Chisora before.", that's because you have… The 36 year-old slugger from Zah's hometown in Zimbabwe (in whiteface above) has lost to a number of household names including Vitaly Klitschko, David Haye (who is now his manager), Kubrat Pulev (who fights Joshua in December), Dillian White (twice), and Tyson Fury.

In short, Chisora has lost in basically every bout where he's faced fighters who could compete at the world title level, but he's also beat everyone who was a step below.

And that last run-on sentence fits in perfectly for tomorrow's bout because the boxing world has been waiting patiently to see whether or not Chisora's opponent, Oleksandr Usyk, is a world title contender.

Last year, Usyk beat up on some soup-can from Chicago named Chazz Witherspoon, stopping him seven rounds into an otherwise boring match.  But Chisora is a much more legitmate challenge, so a convincing victory by the favorite Usyk (-1000) will give legitimacy to his status as the no. 1 contender in the WBO rankings.

AND, should he come out victorious against Chisora, Usyk has the rights to a title shot in 2021 against WBO titlist Anthony Joshua.

But who the fuck is Oleksandr Usyk?

As I mentioned before, Usyk unified the Cruiserweight division before moving up to the heavies.  He was the first boxer in history to hold all four major world championships (WBA, WBC, IBF, and WBO titles) at cruiser, and for those who have never seen him, he looks like the type of guy that would saunter out of a Russian bathhouse in Brighton Beach with those epaulet tattoos on both his shoulders and various other pieces of Gulag prison ink scattered around his body.

But he still hasn't proven full that his iron chin and devastating power transfer to this higher weight class.

Chisora will certainly help that along tomorrow afternoon.

I like the favorite again here, but I will probably throw a couple of bucks on Chisora… That old bastard has a little more than a puncher's chance, and I need to see Usyk dominate at this weight before I am all-in.  Usyk SHOULD win… But Dereck has a real shot, so that's enough for me to grab the longer odds (Chisora +600). 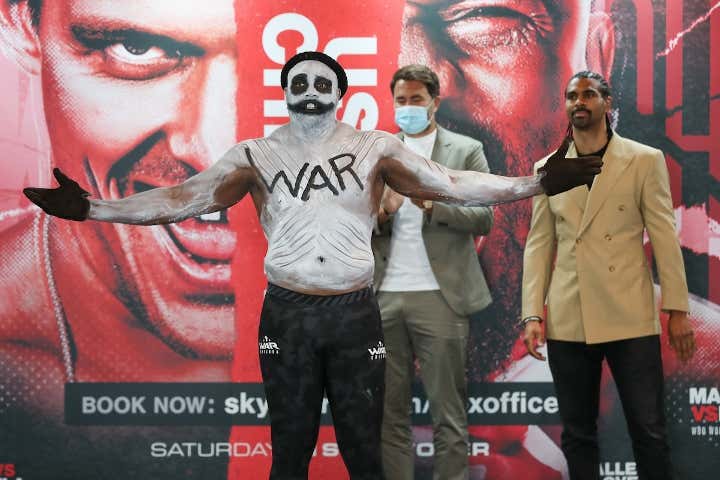 You know who else is not fully convinced yet that Oleksandr can hang with the big boys?

Here's Fury sizing up Usyk like a piece of veal…

One more thing: If you want to tune in a little early for this card, the co-main event is an IBF lightweight eliminator between Lee Selby (28-2, 9 KOs) and George Kambosos (18-0, 10 KOs). The winner of this contest becomes the IBF mandatory for the newly undisputed champion Teofimo Lopez Jr.  This matchup is basically a coin flip, but I see it going the distance and I give a slight edge to the younger Kambosos.

That's it for tonight… Be back tomorrow with Naoya Inoue vs Jason Moloney, and then the big one- Gervonta Davis vs Leo Santa Cruz.