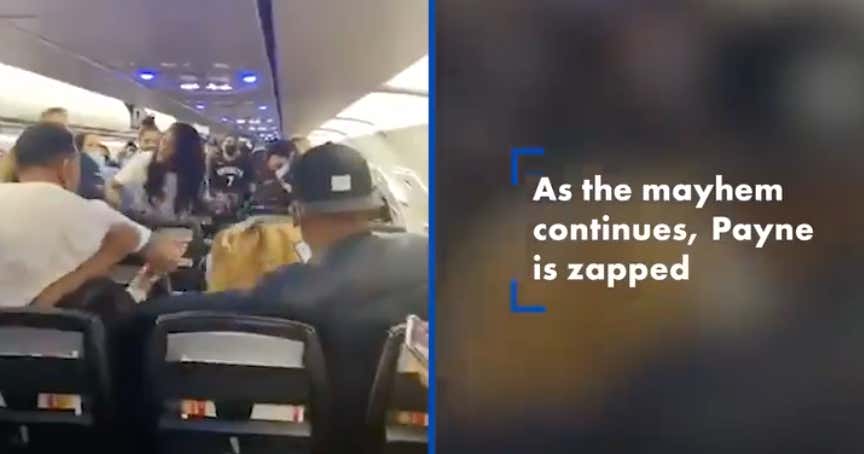 I wrote the title to this blog and then I sat back and I thought, "hmmm….that is the most "no shit" title I've ever written". There is nothing less shocking than the title of this blog. It's like a reverse Mad Libs. The only shocking thing is the person who was tased was angry about a person not wearing a mask…but in the non-shocking part, she wasn't wearing a mask either. It's poetic.

Ny Post - A passenger aboard a Spirit Airlines flight from New Jersey to Puerto Rico captured a wild brawl that erupted when the plane landed in San Juan, where a woman who reportedly refused to wear a mask was tased by cops.

The woman — identified as Nyasy Veronique Payne — “provoked an incident by acting in what witnesses called an aggressive, hostile, & defiant behavior,” Puerto Rico police said, according to CBS reporter and passenger David Begnaud.

In a series of tweets, Begnaud said he spoke to a passenger named Alfredo, who told him the aggressor had been punched before she went on the offensive.

“Alfredo says during the flight, a young man was moving about the plane, switching seats and not wearing a mask. Flight attendants, according to Alfredo, instructed the man to stop switching seats & to wear his mask,” he wrote.

“The man didn’t stop. When the plane landed police were called,” Begnaud added.

Apparently, the violence began upon landing when three male passengers began yelling racist and homophobic slurs at the three black women, including Payne, who retaliated, according to Alfredo.

At this point, there is no excuse for not wearing a mask on an airplane. Like…just do it, man. Yeah it kinda sucks, we all know it, but we're all in this together. Nobody wants to wear a mask, but that's where we're at so we have to suck it up and be adults for a couple hours, it's really not that huge of an ask when it comes down to it. Just pop some pills, wash it down with one of those little bottles of airport wines, and take a nap. Wake up, chug a Red Bull, and you'll be on with your day. It's like some people have never flown before???

What I feel bad for are the flight attendants who are completely helpless. Like, what can they do in this situation? You're in a metal tube going 9,000 MPH, 40,000 feet in the air, they cannot force a mask onto a grown man who is belligerent and refuses to wear one. Maybe they should be able to stab him with a horse tranquilizer? I think they need to be given something to even out the playing field. The second a Spirit Airlines flight attendant hits the first person with a metric ton of ketamine, I think word would spread prettyyyyy quick.

It kinda sucks we can't all be civilized and work our way out of this fucking pandemic mess. Everything is going the wrong way right now and it's pretty frustrating. I swear to god if they lock down NYC again I'm going to lose my god damn mind. Those first couple of months of this, March and April, I never want to do again. Torture. I doubt that'll happen because everyone in NYC has already gotten COVID (thanks, Dana!) but if it does…boy. Never mind. Don't even want to think about it. At least I'll work out again. I got in good shape from May-August. Then a few things opened back up again and I was like alright, that was a good run, time to be a fat gross fuck again. Feels good, man.