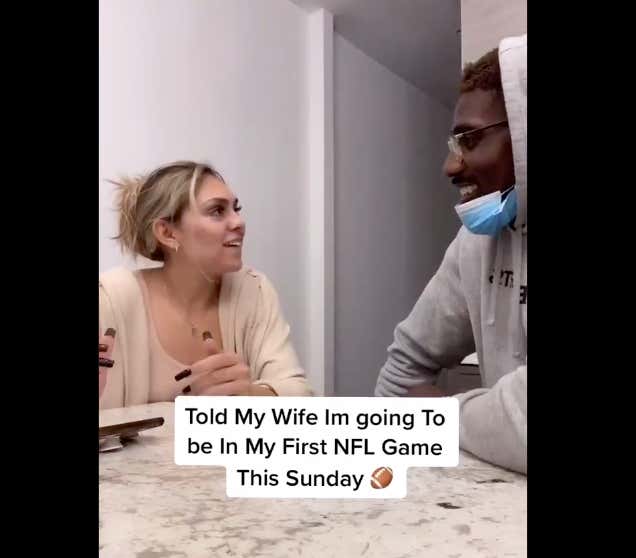 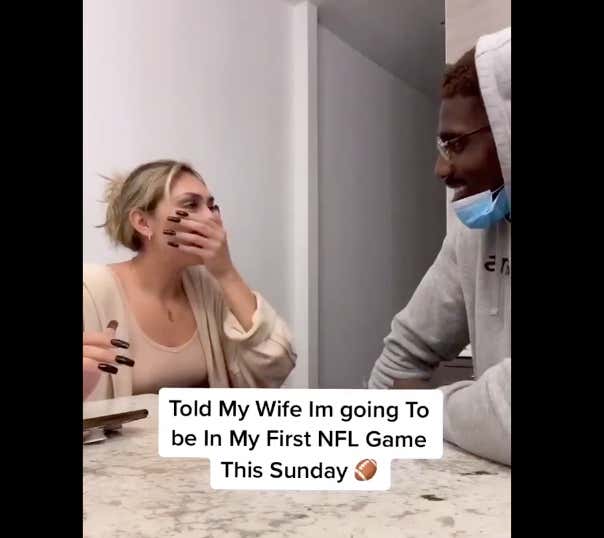 Everyone knows I'm a hopeless romantic. I text my ex gf all the time, often at the latest hours of the night, just to see how she is. When she doesn't respond I'll sometimes take an Uber over to her apartment building and sit across the street staring into her 4th floor window. She's always re-arranging the furniture in there with a Task Rabbit, which I think is just great. Always trying to get the perfect bedroom set up, and it's great she can employ and get a new perspective from a different big strong man every time. She misses me and just wants everything to be perfect for me, it's so cute.

So while I am involved in my own romantic ventures on weekends, undrafted Saints WR Juwan Johnson has his own. A married man who has been on the Saints practice squad this season finally got to tell his wife the best news- he's been activated onto the official roster:

It's just beautiful if you ask me. It's probably not easy being married to someone chasing their NFL dream- we know careers of NFL players are already short, never mind for undrafted players. She sees how hard he works, trying to keep his dream alive. So I cannot imagine the bliss they both felt getting this news. Currently, practice squad players make $8,400 per week, or $142,800 for 17 weeks. Obviously that's not terrible money, but consider 1) they can get hurt and be released at any time, and 2) the minimum annual salary for an NFL rookie is $480,000. So cashing a game check has got to be a pretty nice boost. Remember that $480,000? When a rookie practice squad player cashes a game check, he gets 1/17th of that, which comes out to a cool $28,235.29. Not too bad for a week's pay and a Tik Tok that lasts a lifetime.

One day my ex gf will stop moving her bed all around and we'll laugh about the times I was hiding in her bushes. We'll make cute Tik Toks like Juwan Johnson's and I definitely won't be in jail. #Goals