The Kazakh American Association has slammed Sacha Baron Cohen’s “Borat” sequel for what it deems to be a racist depiction of Kazakhs. The group is also questioning Amazon Prime Video’s support of a film that could, they say, “incite violence against a highly vulnerable and underrepresented minority ethnic group.”

“Considering today’s socially aware political climate, why is a racist film which openly berates, bullies and traumatizes a nation comprised of people of color an acceptable form of entertainment that meets Amazon’s ethical values?” the letter states. “Why is our small nation fair game for public ridicule?”

I see both sides of this to an extent.

For the Kazakh's I'll give them this: Whenever I think of Kazakhstan, the first thing I think of is Borat. The second thing is space launches since their the main launching point for a lot of rockets from us and Russia, but since most people aren't nerd bitches like me, I don't think there is a second thing. Being forever associated with a parody character in the west sucks.

That said, I just don't see how you can watch Borat and see it as a mean-spirited swipe against Kazakhstan instead of against America. The entire joke of the character is that Americans are so stupid that they see this insanely over-the-top crazy character and just accept his behaviour because that's just "how foreigners must act" in our pea brains. The joke is us on us, not them. I don't think Borat viewers watch the movie and think that it is how Kazakh's actually live and behave. This is what Cohen has said on the subject:

“This is a comedy, and the Kazakhstan in the film has nothing to do with the real country,” Baron Cohen said in a written statement to The New York Times on Monday. “I chose Kazakhstan because it was a place that almost nobody in the U.S. knew anything about, which allowed us to create a wild, comedic, fake world. The real Kazakhstan is a beautiful country with a modern, proud society — the opposite of Borat’s version.”

I think in order to view the movie as a hurtful attack against Kazakhstan you have to be REALLY taking this movie at face value and almost purposely misinterpreting it. You know who should have a bigger gripe with us? Russians. They've been the bad guys in every major piece of media to come out of America for over half a century.

I also take issue with Kazakhstan self-representing themselves as a tiny, helpless country. There are 195 countries in the world and Kazakhstan is the 9th biggest by land mass. Their border with Russia is the second longest land border in the entire world! Their population might not be high (64th worldwide), but they're a big goddamn place!

Also, not for nothing but this maybe isn't a fight that the Kazaks want to pick... 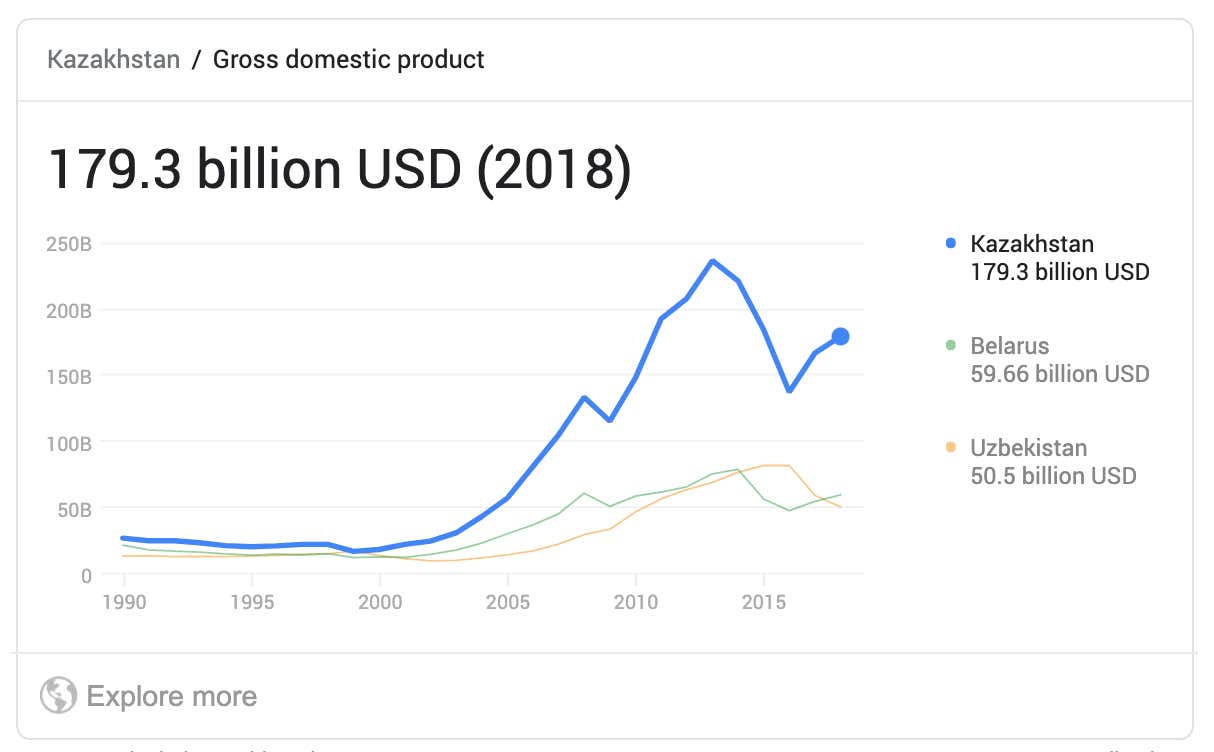