FIRST AND FOREMOST -- Stick with Hard Factor News and Barstool News Network for election coverage and tune in TONIGHT at 6pm EST where we'll be streaming all night (and probably all tomorrow) until a winner is announced.  We'll be joined by various Barstool personalities and other political pundits from all across the media.

Since you’re following politics anyway for the next few months, use this link to bet on the election and get a free $20 matched on us when you sign up at that URL PredictIt.org/promo/HardFactor20. PredictIt is a forecasting market, so you buy stocks of a candidate/party in each race, but the lines are always similar to what is offered at normal sportsbooks. No fuss - use a debit card and be playing and withdrawing winnings in minutes. Use the chart below to convert PredictIt share prices to traditional Vegas Odds. 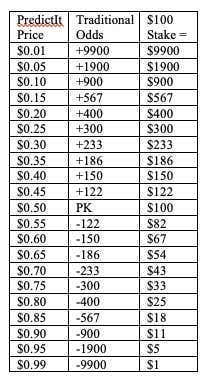 PredictIt offers various kinds of markets.  One of the most popular being Banded markets which include a range of value for the selected market.  For example: 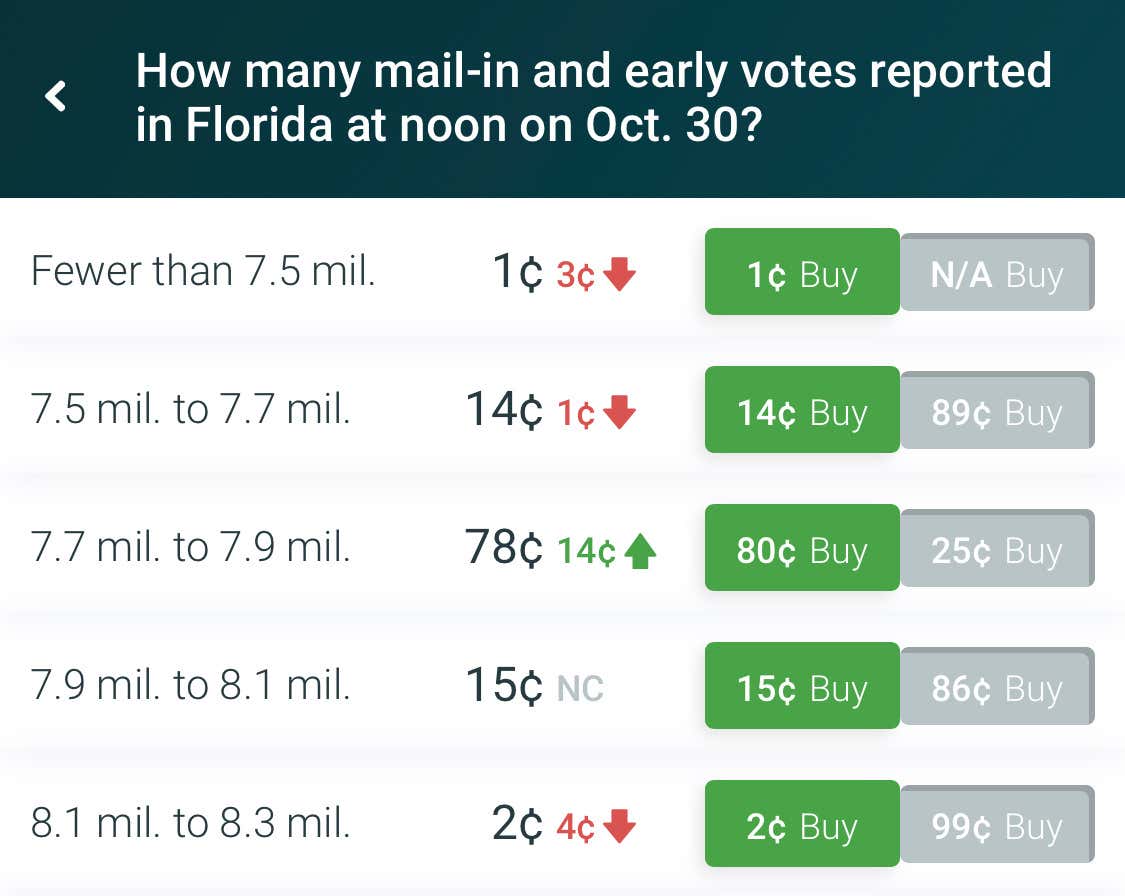 Other markets allow you to buy into single value markets.

The currents odds in every state: 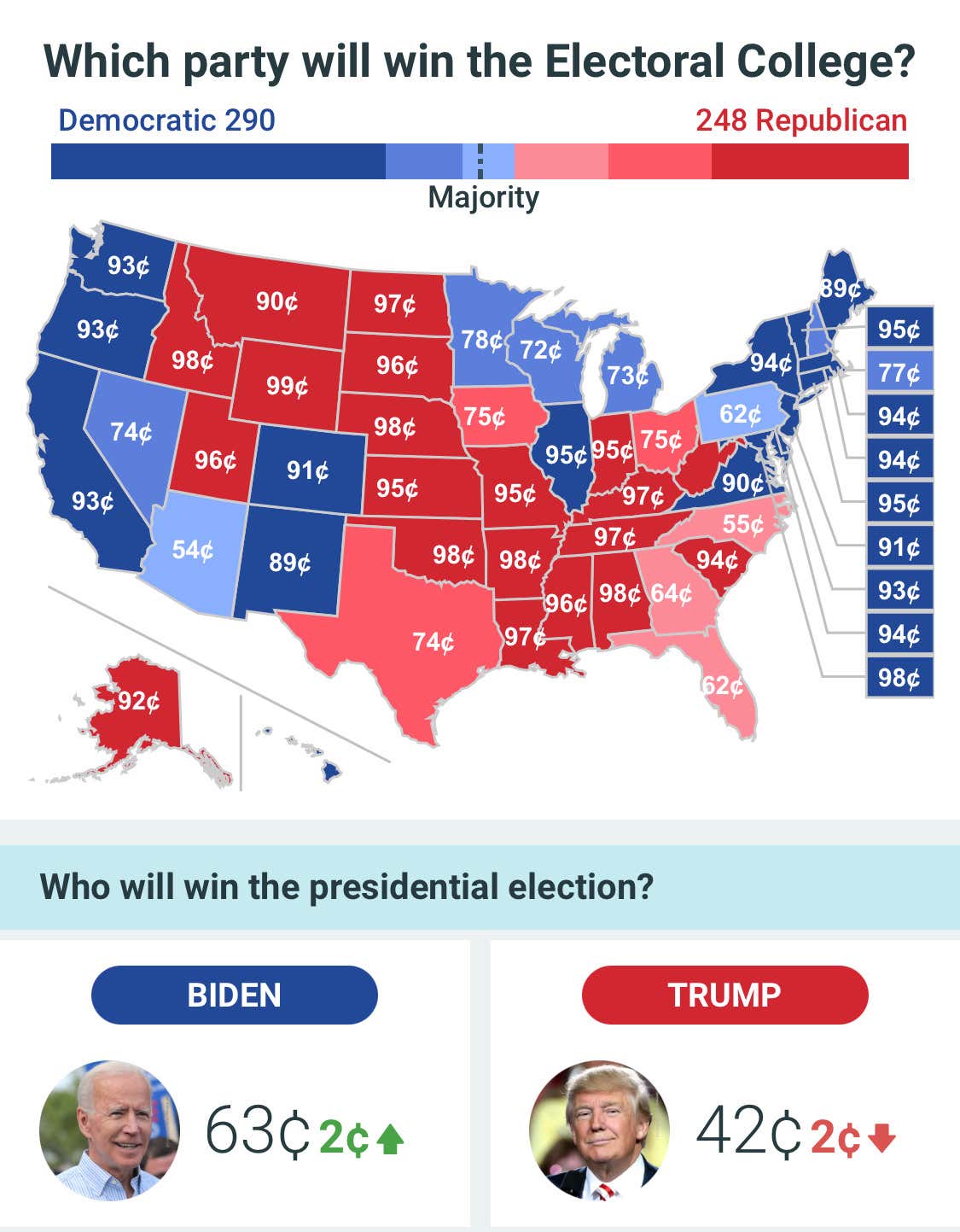 PICKS FROM THE GUYS:

WHEN THE WINNER WILL BE ANNOUNCED - FROM MARK

- Pick 'No' on the Presidential election being called by CNN and Fox on November 3rd. This needs to be officially called prior to 11:59:59PM eastern time on Tuesday 11/3 to lose this 'No on November 3rd' bet. With so many close states in the polls (PA, AZ, MI, WI, NC, GA, PA, NV, OH, FL + TX) and record turnouts including by far record mail-in votes that have to be counted, do not expect a result prior to going to be on Tuesday. This is a -230 bet but one I'm very confident in. - Mark 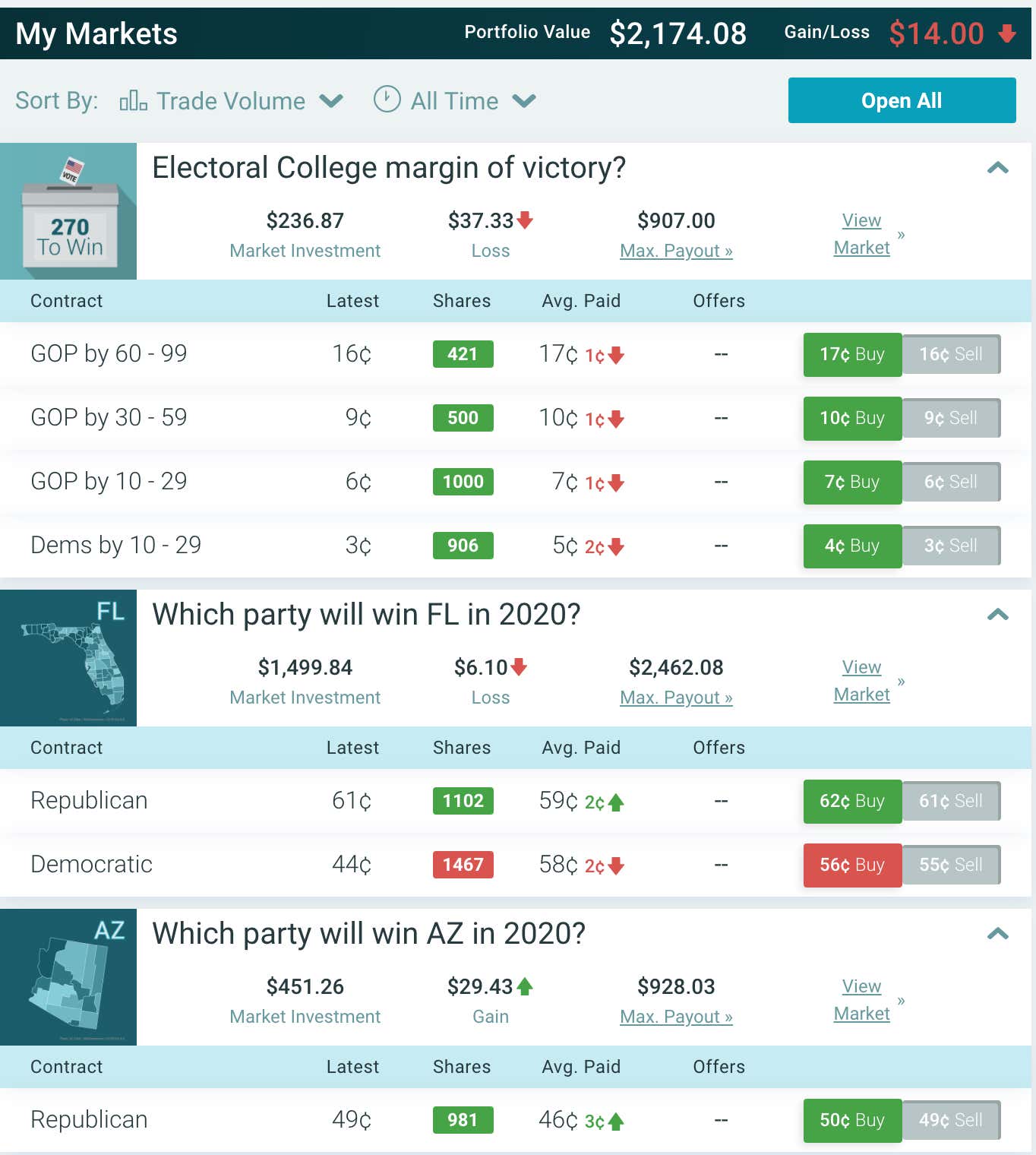 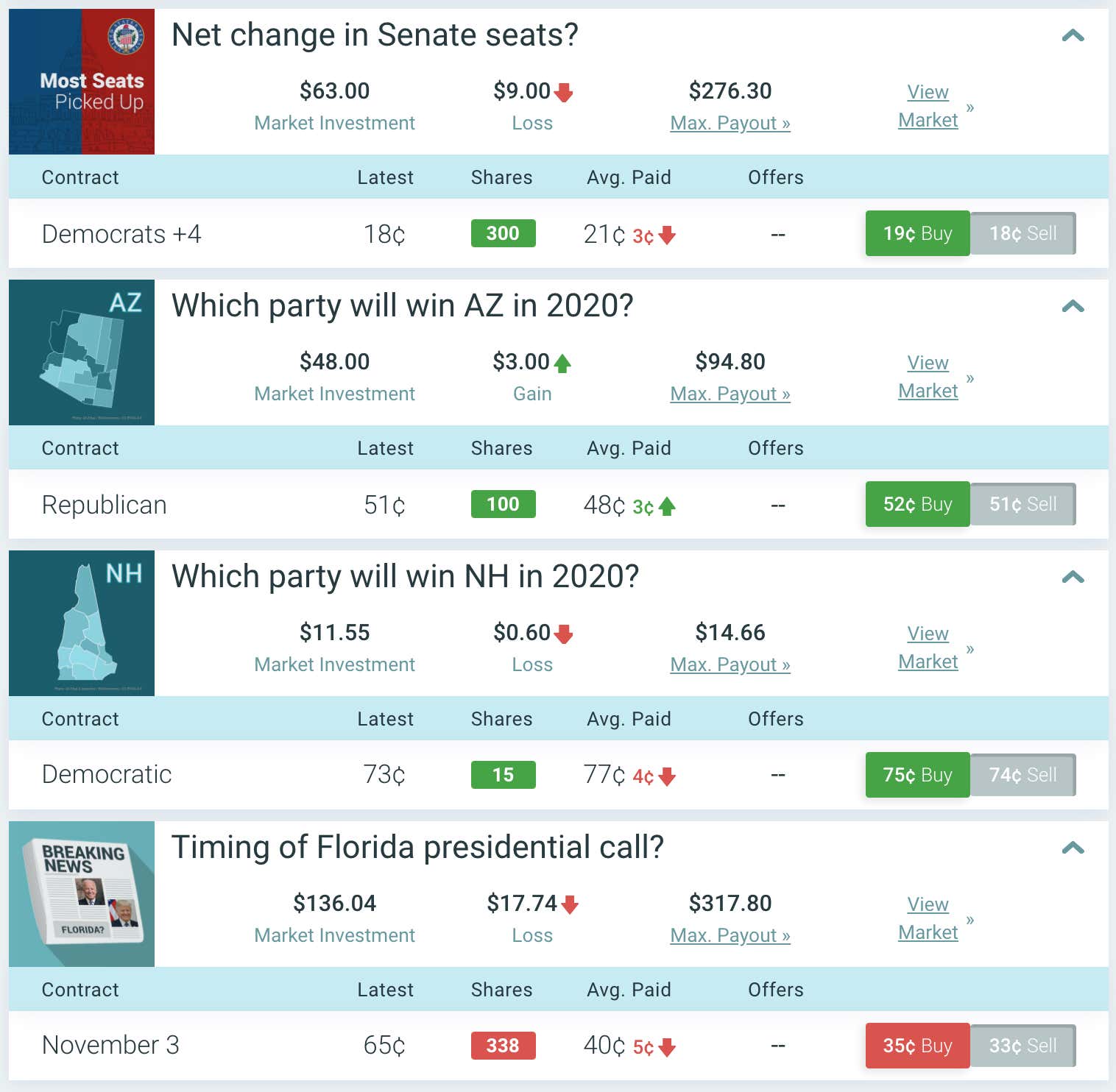 WILL - HOW THE RACE SHOULD UNFOLD

I've got action mostly on the Red side since the odds are more favorable state-to-state than it is for the Blue, AND I had a future on Trump to repeat as the incumbent before Covid hit. I never dumped it, but with swing states tightening in the polls leading up to the election, hopefully, I can at least flip it for some profit on election night, even if Biden ends up winning.

If I had to pick my shares going into Tuesday night all over again, I'd probably have focused mostly on Red in Iowa. That was always, to me, going to be a red state despite what the polls were indicating. At times the Red price was as good as 58c, and even still at about 75c it feels pretty good. Similarly, the popular Senator in Iowa Joni Ernst will win almost certainly win again, and she's still available at about 65c. I also like the relatively safe Red odds for Texas and Ohio, the Coin-flips in North Carolina and Arizona; and if you're looking for red upsets (less likely to hit), the best candidates are PA, WI, MI, and NV.

The states to watch CLOSELY tonight:

- Southern Leaners that have historically favored Republicans, but show tight polls going into this year's election (North Carolina, Georgia, Florida, Texas, and Arizona). Trump likely needs to win all of these to retain the White House, unless he unexpectedly sweeps the rust belt, including Minnesota. On the flip side, the Biden team will be looking for a knockout if they can steal any one of these historically red states.

- Midwestern/Swing states that have teetered back and forth between the parties, and are hanging in the balance again this year (Pennsylvania, Ohio, Michigan, Wisconsin, Iowa, Minnesota, Maine, New Hampshire, Nevada). All of these states have volatile polls where one shows Biden up by a lot, and others show Trump holding a slim margin… we'll all have to tune in Tuesday night to find out what's actually going on. Will Biden win comfortably like most of the polls suggest, or can Trump sweat out some of these swingers in very small margins as he did in 2016? Time will tell. Get your popcorn ready and watch the @HardFactorNews team try to stay awake until the Presidential winner is crowned on our Election Night Live Stream.

To hear more PredicIt picks, and other weird news, listen to Hard Factor News Monday-Friday wherever podcasts are found and 10-11 AM on Barstool Radio.  Your daily dose of News Cocaine.