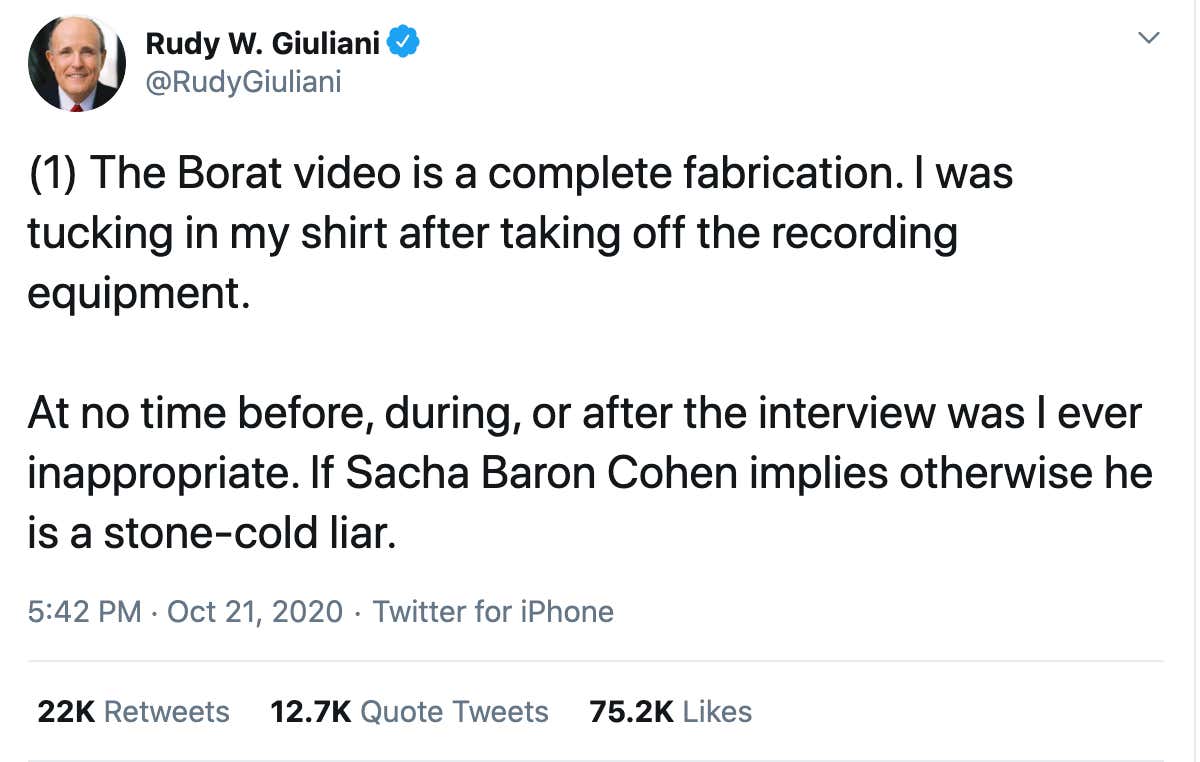 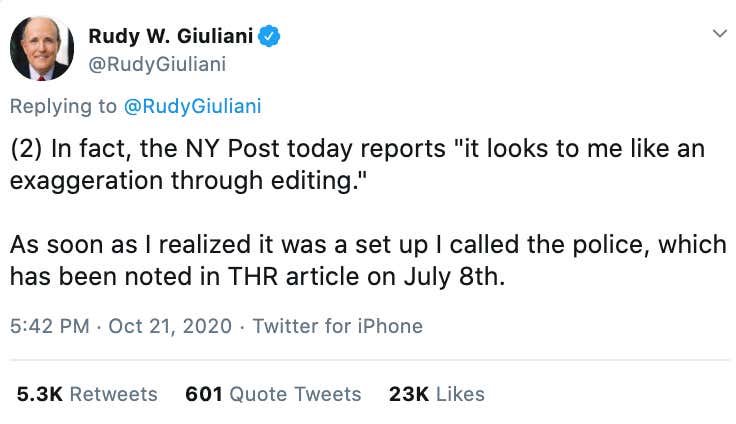 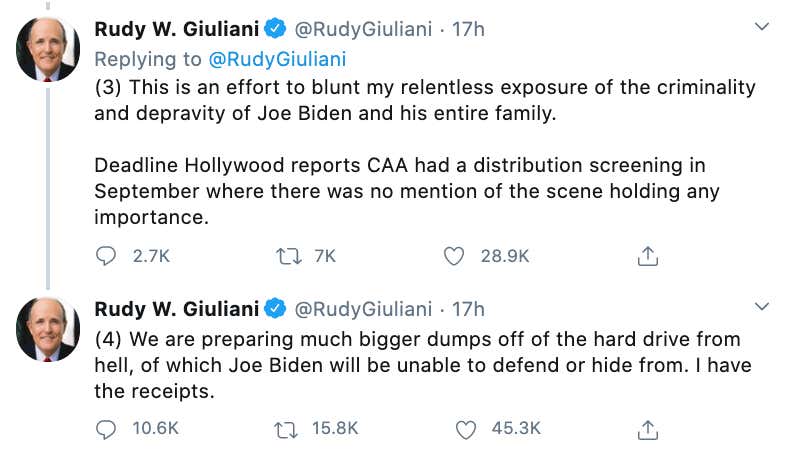 Audio from a radio spot in July when the incident happened:

I have absolutely no idea how Sacha Baron Cohen can continue to pull this off. Particularly today, in 2020, with A) his level of fame 2) the world being way more skeptical and perceptive now than they were back when he first started and d) Politicians being as paranoid and locked up as they are in this climate. For Sacha Baron Cohen and his team to get this interview, get into the building, up the stairs, into the hotel room, and pull off a patently ridiculous interview along with a naked surprise prank…it's simply unfathomable. Either I'm putting on my tinfoil hat and there was some sort of agreement to be involved, or SBC is simply an absolute master of espionage and pulled off this intellectual HEIST. I mean what if Sacha Baron Cohen was a homicidal maniac? Rudy Giuliani would be fucking dead.

But that's neither here nor there. The subject, at hand, is this creepy old man laying on a bed with his hand down his pants in a picture that very much looks like a man who was just about to engage, or just finished engaging in, sexual activity with a young blonde woman. But theres a reason why they only released a picture to promote the movie and none of the actual clip. Because once you've seen the full scene, you realize it's not nearly as incriminating. Thanks to a screener floating around, I've seen the full clip. In it, Rudy Giuliani is revealed to be a creepy old weirdo, but there's no sex or nothing inappropriate to the level of kicking him out of his position. Whatever the fuck position that is these days. Does "carrying Trump's water" actually have a title?

Anyway, in the clip Rudy completes a full interview that is so ridiculously bad and poorly conducted, it's laughable to say he didn't get punked. Complete with idiotic questions and interruptions from Borat in disguise (including a joke about Giuliani marrying his own cousin, right to Rudy's face, which was fucking hysterical), there's simply no way anybody who watches that would say that Rudy sniffed out the prank and didn't get played. Did he get a massage or engage in sexual activity? No. No he didn't. But that wasn't the prank. I mean, I'm sure they would have loved for him to whip his dick out…but the prank was him doing a stupid interview and Borat using him as a prop in his movie plot that involves marrying off his 15-year old daughter.

So the creepiness includes - a lot of laughing and flirting, which to be fair, is initiated by the girl interviewer from the movie. They finish the interview and they go to the bedroom of the hotel room to have a drink. Rudy at one point puts his hand on her hips and says that she is going to give him her phone number and address, and then when she offers to take his mic off him, she untucks his shirt. That's where Rudy lays down on the bed to tuck it back in. Now, do I think it's weird to lay all the way down and shove your full ass hand down your pants to tuck in a shirt, particularly when you're not alone? Yes, yes I do. Did a lot of the flirty behavior appear super suspect, especially with a young girl? Yes. (Note - in the movie she's supposed to be 15. She doesn't look even REMOTELY CLOSE to 15.) So Rudy is being a creepy flirty old man with a young girl. But he didn't think or know she was "underage" and nothing more than gross old man flirting occurs.

Rudy is patting himself on the back for calling the police and knowing it was a prank after Borat fucking jumps out of a closet naked. Uhhhh YEA DUDE. I would fucking HOPE by then you realized it was a prank. That's the END of the bit. They already got you for the past 30 goddam minutes, you dumb old fool. You got played, just admit it. They didn't catch you pulling a Jeffrey Epstein, but the fact that Rudy is using that as his barometer for whether or not he got "caught" kinda lets you know what his sliding scale for behavior is. When a dude is like, "I didn't even FUCK HER!" you can kinda infer his usual behavior isn't the best.

Rudy is a gross, weird old man and he got caught being a gross, weird old man. He also got caught engaging is a WILDLY stupid interview strictly because it was being conducted by a young chick. Him trying to call it anything else is ridiculous. But, the other side trying to make it anything more is equally ridiculous. This is a classic, typical Sacha Baron Cohen bit. We've seen him get other politicians in way more compromising situations, saying way more incriminating stuff. So, he wasn't as bad as them. But we've seen other politicians, i.e. Giuliani's Daddy, Donald Trump, sniff out Cohen's pranks way way faster. So Rudy falls somewhere in the middle. A run of the mill creep, and a definite idiot. No more, no less. Not everything needs to be measured by extremes. It's a funny bit that we can all laugh at. Don't ruin the fun. 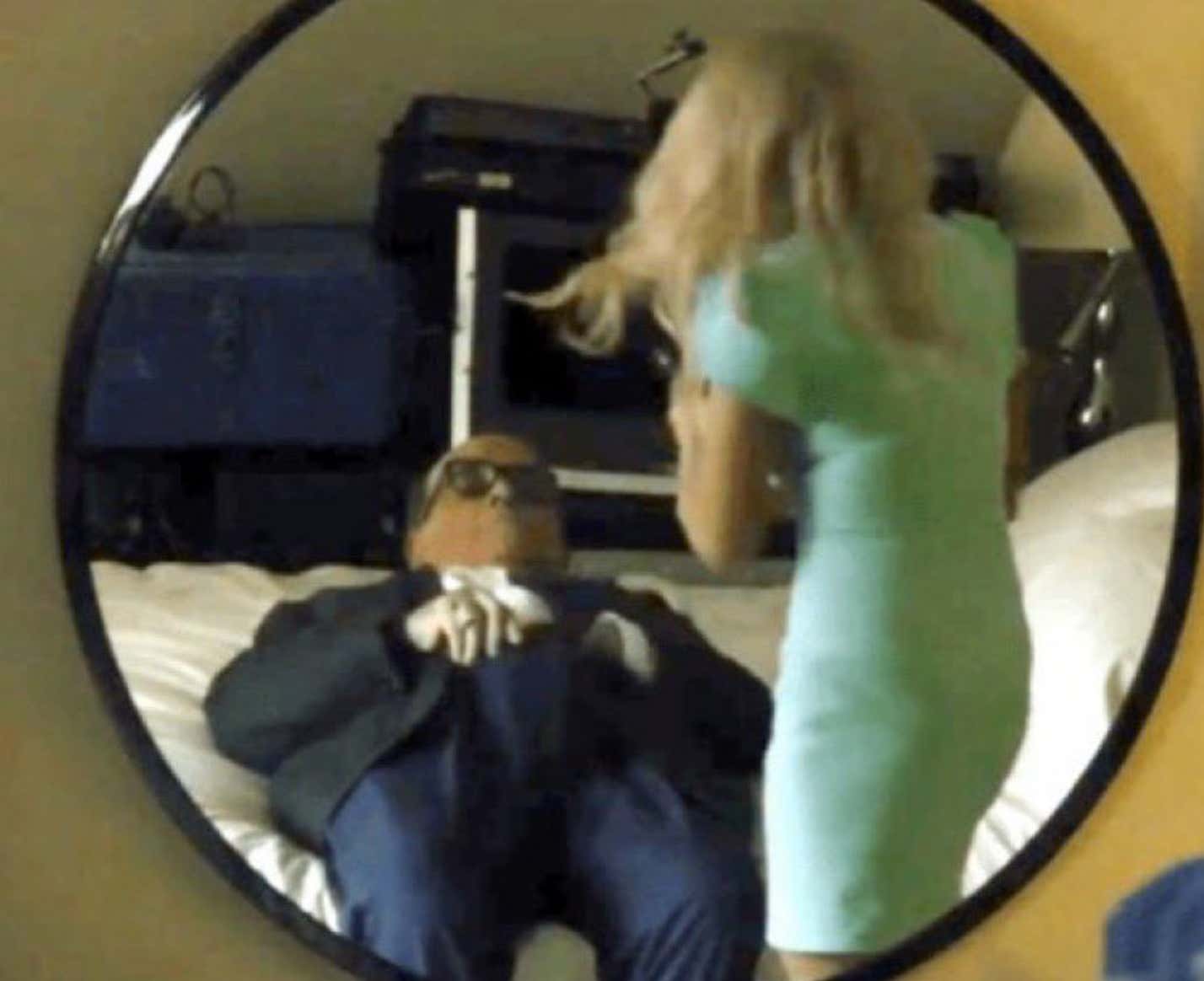