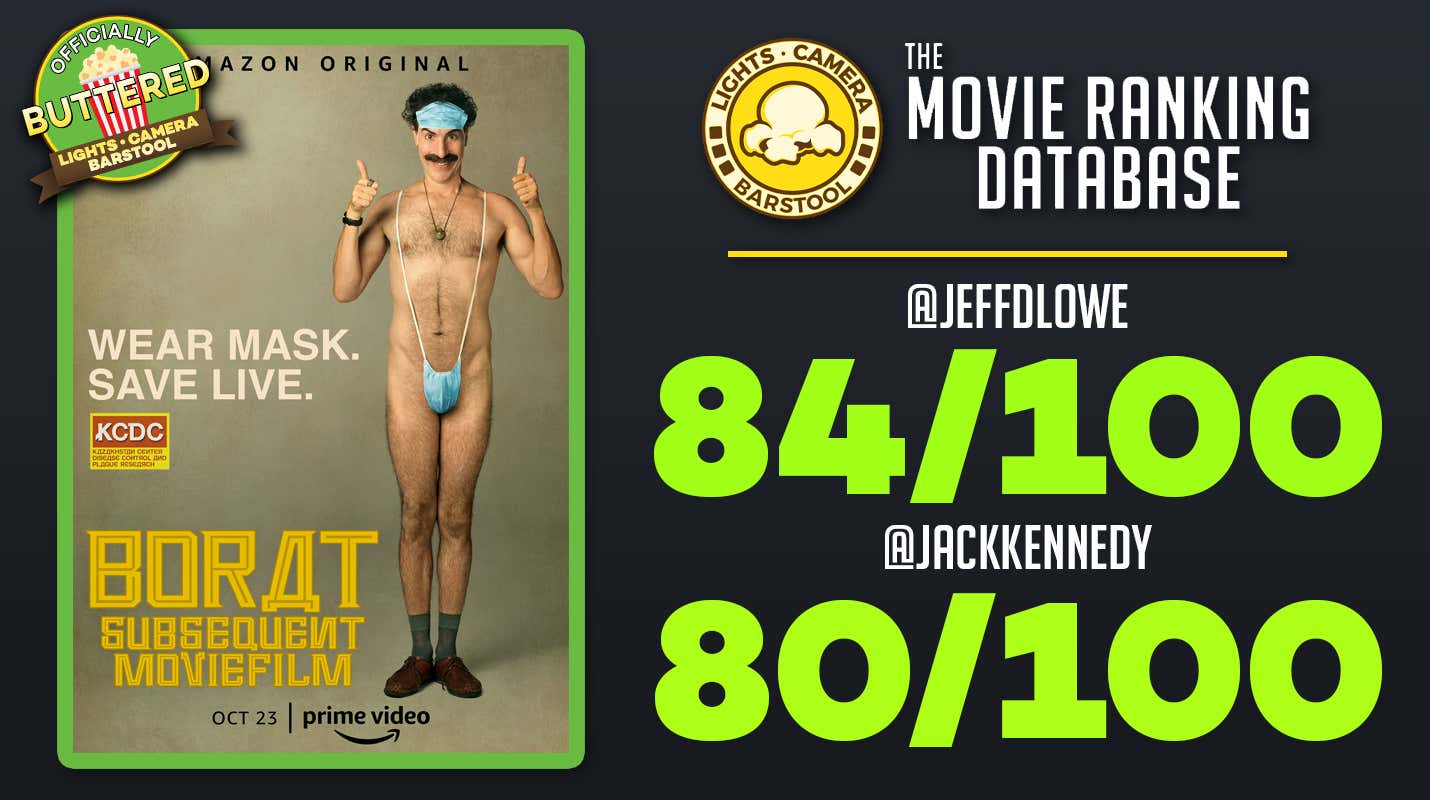 The sequel to 'Borat' drops this Friday on Amazon Prime Video, and we got to check it out early…

Fourteen years after release of Borat, Borat Sagdiyev returns to the United States from Kazakhstan and this time he discovers more about American culture, the COVID-19 pandemic, and the 2020 elections. (via Wikipedia)

JeffDLowe (84/100): To follow up ‘Borat’, and to do so 14 years later in an absurd political climate, is no small task, but Sacha Baron Cohen once again delivers on expected shock and laughs. While it isn’t as good as the original, there is enough to go around to leave fans of the do-it-all entertainer more than pleased.

My initial expectations for this movie were low, super, super low. It was a mix of a few things for me, one of them (the strongest) being the climate of comedy and politics. I know it’s a tired trope to spout, but I am just tired of politics and its continuous seeping into every bit of comedy that releases in the mainstream. From late-night television to the cesspool that is Twitter, it’s unavoidable, and there was no question of what we would be getting out of the ‘Borat’ sequel.

With that said, if anyone can find a way to navigate these waters, it’s Sacha Baron Cohen. The Golden Globe winner for his role in the first movie, Cohen, who is also starring in Aaron Sorkin’s new movie on Netflix ‘The Trial of the Chicago 7’, has to be one of the most talented people in Hollywood both behind and in front of the camera. While the freshness of the first movie may not be as present, in large part to the inability to sneak the Borat character into as many public scenarios, the movie has a bit of heart to it that adds a nice element to balance out the shock-value comedy. Cohen does a great job weaving together his message with the movie in a way that isn’t trampled by the type of comedy he enjoys laying out with his roles.

And trust me, there are a few moments, one in particular, that will give you quite the “oh fuck” response.

Now, politically speaking, is it a bit on the nose? Yes, very much so, and more than the first movie. That’s hard to avoid these days, so I don’t fault him. But when it comes to comparisons with the original movie, the sequel doesn’t quite hit the mark on all fronts comedically speaking.

If you’re sick of politics and comedy, or politics in general, you may find yourself wanting to get rid of the ‘Borat’ sequel within the first few minutes. But anyone looking for a good laugh in 2020, which is hard to find, especially in movies, ‘Borat Subsequent Moviefilm: Delivery of Prodigious Bribe to American Regime for Make Benefit Once Glorious Nation of Kazakhstan’ is going to be worth the wait.

KenJac (80/100): While not as good as the first movie, I think Borat 2 is a worthy sequel that delivers some great laughs and solid commentary while giving you that warm nostalgic feeling that you crave.

Sacha Baron Cohen is as Borat-ey as ever, falling right back into the role without a hitch. Since the original movie is obviously one of the most culturally impactful comedies ever, he doesn’t do much of his public-facing schtick of the mockumentary in character as Borat since he would get immediately called out. Instead, a lot of the public-facing stunts are Cohen playing Borat who is in disguise as someone else. He is as funny as ever, pushing people’s buttons and getting them to admit fucked up things in only a way Cohen can do. Ken Davitian (Azamat Bagatov) is replaced by Irina Nowak (real name Maria Bakalova), who plays his daughter. She is as outrageous and shameless as Cohen, which made their pairing work great.

Just like the original, Borat 2 dives deep into American culture to show us some of the stuff we don’t normally get exposed to up close and personal. For those of you wondering, yea, I’d say this one is a bit more politically pointed than the original. The original was as well, though, and I don’t think it ruins this movie in any sense. There are definitely moments where it may feel a bit on the nose, which is hard to avoid considering how hard political satire is these days, but it mostly toes the line.

That all said, this movie is pretty fucking funny. I count at least 10 laugh out loud scenes and plenty of uncomfortable moments that make this more than worth watching. There aren’t any pulled punches and there is an incredibly “EEK” moment at the end that I’m sure is going to get blue checkmark Twitter in a frenzy.

--
The movie is Officially Buttered, despite our light praise. You can head to Lights Camera Barstool right here to listen to our latest episode, and this Sunday's where we will review 'Borat 2'.