When I first arrived at the Barstool Sports office a few months ago, there were no public snacks. When people began to arrive in larger numbers to HQ and there were still no snacks, public complaints were lobbed out onto twitter via the hellscape that is VivaLaStool.

Now, I'm not going to get into the politics surrounding the validity of whether or not public shaming/complaints/protests work, but this one time it did, with many goods lining the shelves mere hours after this was launched.

Now, I am thrilled to have snacks in the office. I totally understood that when there were barely any of us here, it didn't matter and wasn't worth it, but with more people working here I was thrilled to be able to pop over in the middle of my day to get my hands on a tasty treat.

However, soon after these rows of bountiful goods returned to the shelves, I started to notice a strange and horrifying trend. Throughout the day, half eaten, torn open and nearly finished individual-sized treats such as four packs of Oreo Thins, Nutter Butters, Grandma's Cookies (classic weird Spongebob semi-pornographic internet film by the way), Pop-Tarts and (maybe most horrifying of them all) bags of chips were just left strewn about the counter. The first time I ever saw this, I assumed someone ate a couple Oreos, realized that had to take a pee or poo and (obviously) didn't want to take their delectables along with them. But a trip to the same kitchen for my afternoon coffee, 45 minutes to an hour later, proved this point wrong. The cookies were still there, exposed to the elements, ripe for the picking. I'm not talking about a plate of brownies or cookies baked for everyone here, that is fine. You snag one, you pop the tinfoil cover back on, you go on your way.

Finally, today, driving myself insane that I was the person who was crazy for not grabbing half of a bag of something and leaving it, I decided to lob it out to the only people on this planet who pay attention to me, Twitter.

Was "lunatics" maybe a little hyperbolic? Sure, but hyperbole is the best thing ever, so I fired away. Immediately, my coworker Feits chimed in. 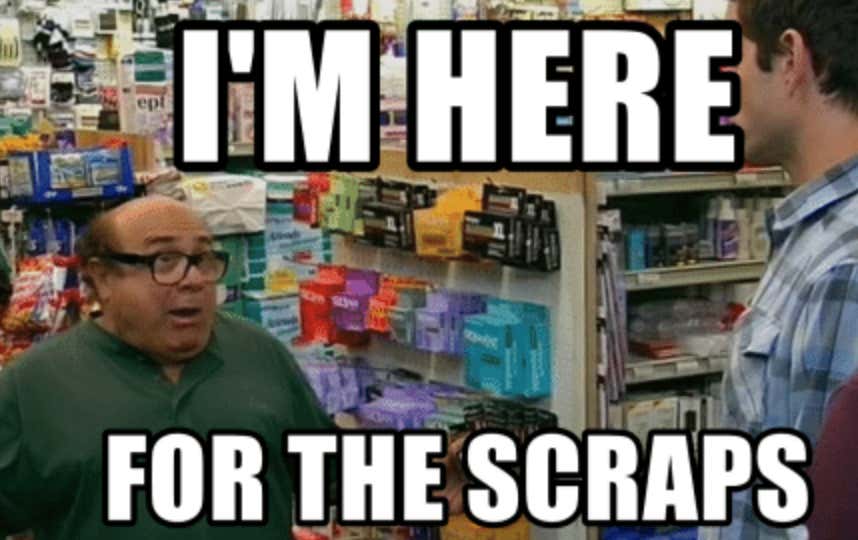 Not shocked, not surprised, not even disappointed because at least someone is eating these and they aren't just completely going to waste. Is he potentially enabling these savages who decide this is appropriate? Is it confusing that a man who claims he won't eat leftovers because those are for trash people will willingly consume the scraps from an unknown coworker? Sure, but again, at least they aren't going to waste.

The general consensus from my Twitter followers is that this is a weird move. I am for sure never myself dipping my hand into a tiny ass bag of chips someone else has put their grubby hands in. Even a Pop-Tart or Oreo sleeve has likely seen some jostling done to get to a treat of choice. Not to mention the number of people I have seen here piss and not wash their hands, which is another conversation for another time.