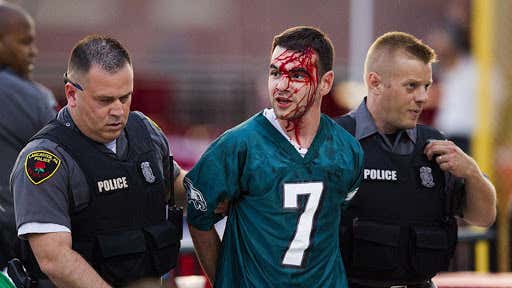 As more teams around the league are starting to let more fans attend games, we're starting to see more videos coming in of fans taking out their anger and frustrations on one another in the stands.

A month ago we had some Browns fans going full Odell vs Kicking Cage on each other.

On Sunday it was the first time that Eagles fans were allowed back in the Linc. It had been a little over 9 months since Eagles fans had been at a game so you know with that much pent up aggression, there was going to be a scrap or two.

And then the only time the Dallas Cowboys showed even an ounce of fight last night was this fella in the stands.

So with everybody getting back into the swing of things with all these fights going down, I figured it's a good time to provide a quick little tutorial on how to properly throw down in the stands.

Did you know that you're allowed to go to a professional sporting event and not end up in a physical altercation? People do it all the time. They simply do not attempt to assault another human being while they're watching their favorite sports team play a game. I know it may seem bizarre to you but I promise that it happens. Instead of punching somebody else's skull, they simply sit in their seat and they watch the game instead. If somebody near them says something they disagree with, they don't immediately rush over to them and try to perform an emergency tooth removal with their foot. They simply think to themselves that person is a jackass, and then they carry on with watching the game.

Step #2: Still don't. But if you literally have no other choice and you have to, at least get the higher ground.

Again, it is much easier to just not fight in the stands in general. But if you are left without options and you need to, the best thing you can do is just run up the stairs as many rows as you need to in order to have the high ground against your opponent. If that means you need to race your opponent from row 14 all the way up to the nosebleeds, then so be it. But don't attempt to fight while you're at a height disadvantage.

Not getting punched in the face sounds pretty good, right? Well I'll let you in on a little secret here. The easiest way to not get punched in the face is to simply not get into a fight while you're in the stands watching a professional football game.

So there you have it. Just follow these 3 simple steps and you'll be kicking ass in no time.