First of all, just so you all know who we're working with here, let me introduce you to Mrs. Emily Mayfield:

Alright, now that we all know each other, let's get to the blog.

So obviously the Browns got beat 100-0 on Sunday against the undefeated Steelers, and while they are currently off to a 4-2 start and on pace to make the playoffs for the first time in a billion years, the people of Cleveland are extremely unhappy with the play of our quarterback. Sports talk radio was brutal yesterday. Do the Browns pick up Baker's 5th year option? Is he the franchise QB? Should we make the move to Case Keenum now? Should OBJ and Jarvis demand a trade? Is he holding back this team from being a Super Bowl contender? Alright, let's slow the roll a little bit here, folks.

Listen, there's no denying that Baker Mayfield was absolutely terrible on Sunday. And he was just as bad in the 2nd half of the Colts game, too. There is certainly reason to question whether he's the long term guy in Cleveland. Especially when we have guys like Dak and Cam Newton coming up in free agency. I mean, add Cam to the Browns instead of Baker and do you think our combined loses would be 76-14? Why didn't we think of that when no one wanted him this offseason.....? Off topic, but still.

Either way, I agree that Baker is playing bad, but if you would've offered any one of us a 4-2 start this season we'd have taken it in a heartbeat. The Browns have been TERRIBLE for as long as I can remember. And that's exactly what Emily Mayfield is saying, too. 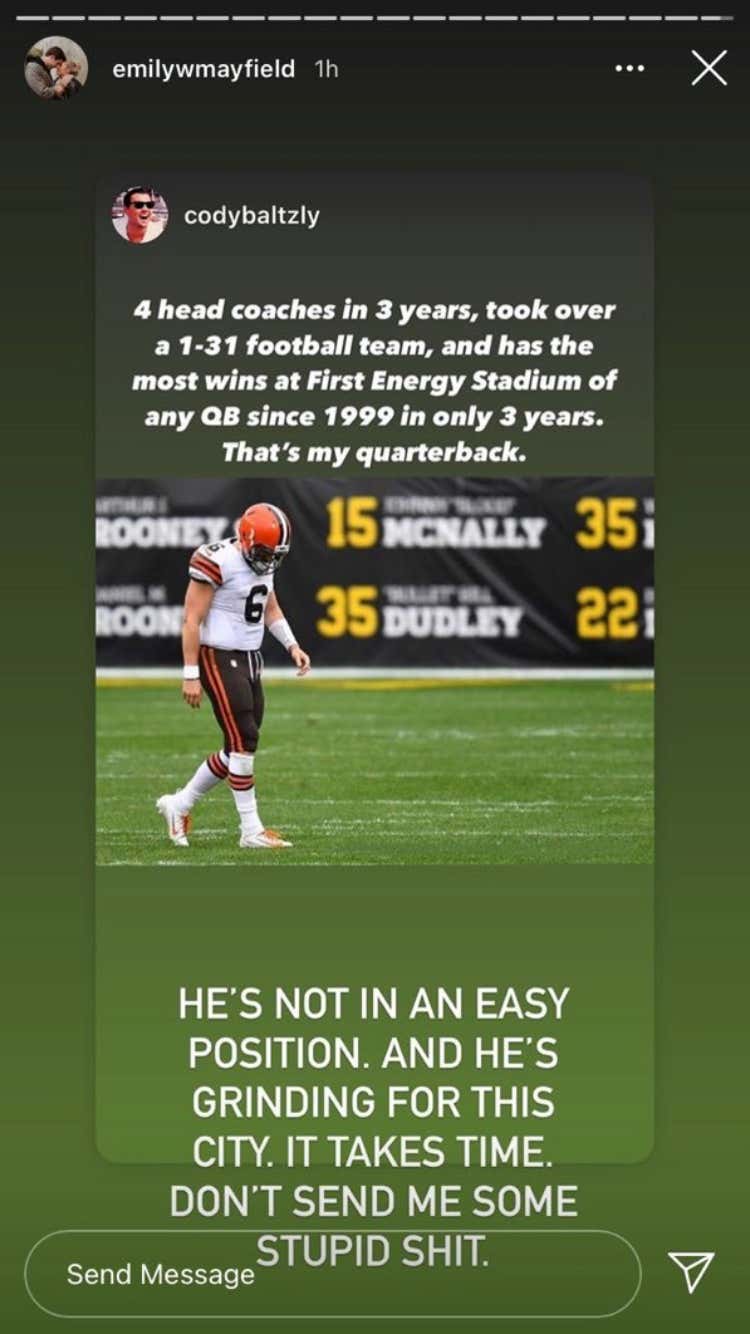 Ugh. I mean, she's right. For the past 20 years, Cleveland has not been an easy position to win. But am I crazy for thinking that it is a whole lot easier now? I'm not saying Hue Jackson is Vince Lombardi by any means, but those rosters he had to coach were AWFUL. Baker now has two All-Pro receivers, two All-Pro running backs, and a tight end coming off two straight Pro Bowls. And a coach with a working brain! Buddy, you gotta find a way to score more than 7 points in the only two games that have mattered thus far this year. So yeah, I think it's completely possible to be happy with the 4-2 record and be unhappy with the quarterback play at the same time. This team needs to win right now. We don't have the time Emily is asking for. And neither does Baker….