I don't remember the exact date, but from the day Big Science said "...oops!" about the whole mask thing, we've seen a lot of videos featuring a lot of justifications/stances/opinions for not wearing one. The vast majority of the time it's being said by someone in various states of being forcibly removed from where they are by someone in a uniform, so it's a little muffled and scattered. But sometimes you get a video like this: a woman announcing her philosophy on PPE crystally-clear before getting booted off her flight to Scotland.

Wild video shows a plane passenger going berserk after being booted off her Scotland-bound flight for refusing to wear a face mask — coughing on other passengers and yelling, “Everybody dies!”

The footage — shot by another passenger on Sunday’s EasyJet flight from Belfast, Northern Ireland, to Edinburgh — shows the woman losing her cool when a flight attendant approaches her to escort her from the plane.

“Everybody dies, you know that?!” the woman yells at the flight attendant. “Every f–king body dies, whether it’s corona or not! Everybody dies!” (The NY Post)

Now the argument here is, the average life expectancy for those born in more developed countries is roughly 76 years for males and 82 years for females. So basic math can give you an educated guess, supported by statistics, as to when you will most likely fucking die. That number will be significantly higher than the life expectancy of someone who swallows Covid 19 spittle after it's fired directly off the back of their throat from a deep, phlegmy cough. Hey Keith why'd you pick such a specific and disgusting example of a way to contract the virus?

Well, unfortunately for everybody who thought they lucked out with their strong-side aisle seat, the bitch lined em up for a one-woman coronavirus firing squad

The woman then walks briskly down the aisle of the plane while coughing on fellow passengers, video shows.

“Everybody dies, that’s the only thing that’s real!” the unidentified woman continues in the clip.

Long story short, everybody fucking dies, but usually from old age and not from a once-in-a-generation plague.  And I don't even need to ask science, you know what I know for a fact a mask does? Blocks an unexpected covid-loogie throat shot while you're distracted by the woodland garden carvings section of SkyMall.  I'll take that.

Don't think I didn't see that "that's the only thing that's real!" and feel a little tingle in my pants around the12 paragraph blog on metaphysical solipsism marinating in my head.  But I'll just keep that to myself, no need to be a pretentious geek loser today. 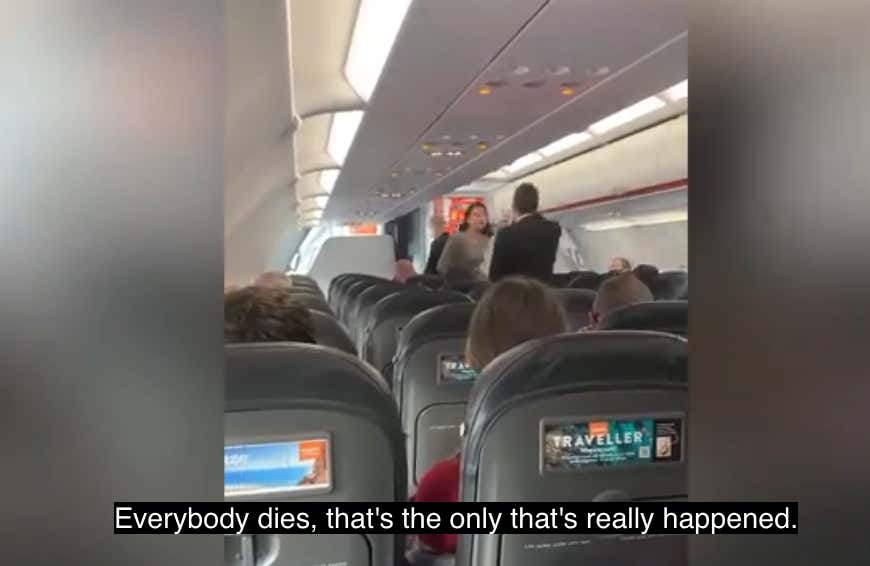