Actually, if you're remotely familiar with the Army or the Department of Defense, you will believe it.

First, we have to talk about how the Army is going to spend $10 BILLION to upgrade the barracks for Soldiers over the next ten years. That sounds like a lot of money, and it is, but this is also the housing for hundreds of thousands of individuals and that is pretty important.

The barracks in the Army, and also Marine Corps, are notoriously shitty and it seems like every few months there's a new viral post about how black mold grows literally everywhere in some of them or how sinks just fall off the wall or something. It is true, by and large the barracks in the Army and Marines suck. The Air Force seems to have their shit together, and they call them dorms, so they automatically get a few points just for saying that. Where do Navy folks live when they're not on a ship? The world may never know. The Space Force obviously lives in space.

Anyway, the barracks suck and these upgrades are necessary as fuck. 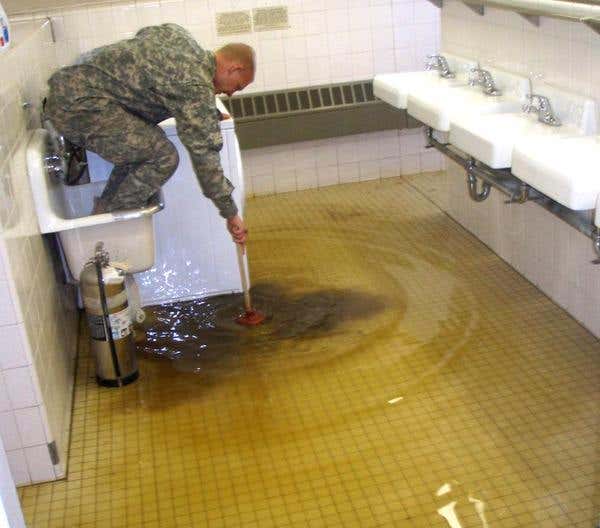 That's just an everyday picture of a Soldier (credit to me for capitalizing it) plunging shit out of a drain because it got backed up with shit. Did somebody poop in the drain? They could have. The world may never know.

The timing of this spending appropriation, or at least the announcement of it, is pretty suspect considering what the Army just got dragged for.

Yep. $8.5 Million dollars for the homes for THREE generals in Austin Texas. THREE. You've gotta be fucking kidding me. It could have been housing for four generals but they tore down one of the $1.29 MILLION properties to put a fucking parking lot, shout out Joni Mitchell. Just mind bottling that some generals are living in multi-million dollar homes with wine cellars and shit and their troops are going "home" to a 400 square foot black mold infested asbestos factory that would be condemned ten times out of ten if actual health inspectors were allowed to go through.

You should listen to the rest of the episode and our righteous indignation.