What the hell? Did Conor McGregor fuck Max Kellerman's wife or something? I feel like that's the only thing that would explain Kellerman's extremely strange personal vendetta towards McGregor at this point, and his constant attempts to downplay the Irishman's fighting ability/try to make him look like a schmuck on national television.

If you're not familiar with Kellerman, he's a has-been respected name in media from the boxing world who now gives shock-jock takes on ESPN, recently most famous for legitimately arguing that Conor McGregor would have a "zero percent chance"  of landing a single punch on Floyd Mayweather in his boxing debut. He landed 111.

Today Max is arguing that in MMA, when a guy who's "best kinda approach is striking" is coming off a long layoff versus "a BJJ guy" - is he referring to Dustin Poirier here? Poirier?! A BJJ guy?! DUSTIN Poirier?! I don't know, I guess - the grappler guy wins.

It's basically the combat sports version of this Michael Scott quote.... 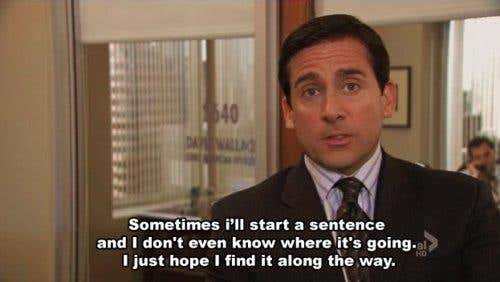 ….sure, there's a couple examples to back his point up, but there's plenty to argue against it as well. It's pretty much a crapshoot and I'm almost positive Max was just flashing back to what the correct take from the McGregor/Khabib fight was and regurgitating it anyway.

Then of course, you've got Shannon Sharpe asking if McGregor could move up in weight to fight Stylebender, who's now teasing a move to 205lbs. As ridiculous as that is, I can let it slide, because it's not like Sharpe considers himself an expert on all things combat sports, whereas Kellerman very much does.

I'd say, if you learned anything here today, it should be:

Generally, that rule applies towards myself, as well. Again, though, I make dick and fart jokes about MMA, and Max acts like an authority on it. Pretty infuriating.