Source - A cameo appearance in the newly-released Adam Sandler flick “Hubie Halloween” apparently violated the terms of her contract, thus leading to Alaina Pinto being dismissed from 7 News WHDH in Boston.

Pinto revealed the news via her Twitter on Thursday afternoon.

I present you with the incriminating evidence that cost someone their job after four years of loyal service. Brace yourself and get all small children away from the screen. Reader discretion is advised. 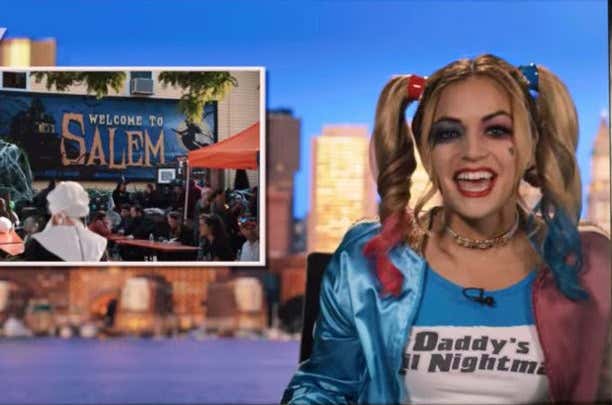 I know how contracts work. I get that employment agreements are legal and binding. And enforceable. I understand a news outlet doesn't want the people they pay to read the teleprompter to appear on other platforms without permission. Especially competing ones.

But for crisssakes, it's not like she went on "The View" and started taking sides in some controversial issue. This is a stupid Netflix Halloween comedy. A terrible, gawdawful one by the looks of the trailer and based on the review of everyone I've talked to who's seen it. But that's a fireable offense? That's not a contract violation that can be resolved with "Hey, don't do that again, OK?" You've got to take someone's livelihood away because they did a cameo under heavy makeup in Adam Sandler's latest vehicle where he plays a misunderstood, simpleton manchild with a heart of gold who gets hit in the testicles a minimum of three times? It's ridiculous.

I've got news for 7 News. You're not a career destination, you're a jumping off point. If you ask anyone whether they'd rather spend the rest of their lives reading morning reports about traffic on the Leverette Connector, putting on their serious face doing stories about shark sightings on the Cape and yukking it up with the weather lady over the footage of an animal being adorable, you've got another thing coming. 100 out of 100 local news people would risk that for a cameo in a Sandler comedy every day of the week and twice on Sunday. This is like the time BC fired Jeff Jagodinski after just two seasons because he had the audacity to take an interview with the New York Jets. Like Chestnut Hill is supposed to be the culmination of a career.

Your loss. Alaina Pinto's gain. She'll land on her feet. Of that I have no doubt.