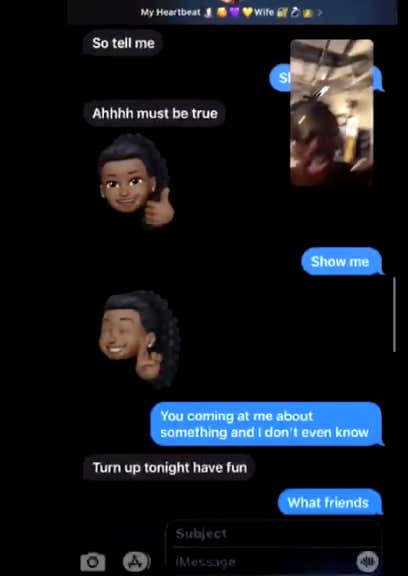 Here's the scene. You just won an NBA title. It's your first one. You're now adding that to your already Hall of Fame resume. You go get the champagne, you start dancing and celebrating with guys that you've competed with all year. The phone buzzes. You're in trouble.

Now just switch that out with watching a game or sitting at a bar with friends and this is exactly the same. The line 'you coming at me about something and I don't even know' has been said in some variation and form for years by all of us. Now it's getting Dwight Howard in even more trouble considering, you know, he accidentally shared the text. Think it should be a well-established rule that if you're the significant other of an athlete and they win a title, there are no rules that night. Let them fuck any chick. Let them talk to any chick or get away with anything. You win a title? You get to celebrate.

I need to know the rest of this conversation. What happened once she found out this was floating around Twitter? Gotta see that text, which I assume featured multiple words in all caps. Just a lot of screaming via text and saying 'k'. That's by far the worst. Call me any name in the book. I don't give a shit about that. If you drop a 'k' or 'fine' or 'whatever' on me, I'm going to lose my shit.

Congrats to Dwight on the ring, hope it's worth the fight.