Quick question for all the commenters: do you like apples?

Look, we play the schedule in front of us. And this week the schedule said the 3-1 Colts. Well I guess technically now you have to call them the 3-2 Colts…..because we just walked right over them. Chewed em up and spit em out. Just like we did to the Bengals, Washington, and the Cowboys. Folks, that’s 4 wins in a row. First streak that long in 11 years. And I’m not sure this streak doesn't hit double digits eventually. That's not hyperbole (extreme exaggeration, commenters). That's just the cold hard truth. Who can beat this team? 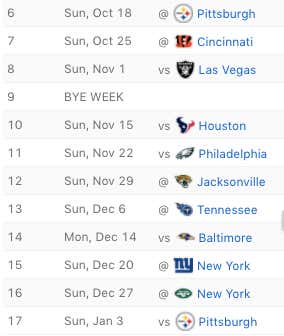 Where’s that LeBron clip when you need it? The one where he’s sitting in a Heat uniform next to Dwyane Wade. You know, “not 5, not 6, not 7”. If the Browns beat the Steelers this week, I don’t see how this team doesn’t rattle off 11 straight, minimum. Bengals, Raiders, Texans, Eagles, Jaguars, and Titans? Is this the remaining Browns schedule or a bakery? Because all I see are CUPCAKES.

Guys, 2020 has been the wildest year of my entire life and it nothing to do with the coronavirus, murder hornets, protests, the election, or Kobe (RIP). The Cleveland Browns are 4-1. 4-1!!!!!! First time in 26 years. And I honestly don't see any signs of them slowing down. This offense is CLICKING. Nick Chubb, rest up for that playoff run, big man. Kareem Hunt did what he had to do today against a great Colts run defense. And Baker Mayfield slang that ball all over the field to his weapons. Two of the best catches I’ve ever seen in my life:

My god. How much more fun is it to have a productive OBJ? I've been saying it all along folks: use more weapons and OBJ will be more productive. Don't need to force it to him. Funny how it works that way.

Another thing that's funny is how anyone in the entire NFL not named Myles Garrett thinks they're going to win the Defensive Player of the Year. Where's Jon Taffer? Shut it down. Dude had 2 more sacks today to go along with his 2 last week, 2 the week before that, and 1 the week before that. He forced a Safety today, and he forced a fumble in each of his last 3 games. This guy is simply unblockable.

…….and he gets his revenge vs. the Steelers next week :)

Big Ben better wear a Michelin Man type body suit this week. Protect himself at all costs. He CANNOT leave the game and make Mason Rudolph go in. I know Myles basically dented his brain with a helmet last year, but after the accusations Myles firing off about Rudolph, it's not going to be "attempted" murder this time. I wouldn't be surprised to see Mason Rudolph on the Covid list this week. Dude cannot go in the game. Myles would put him so far into the ground he'd end up in China. Like Remember the Titans style. "You better get comfortable down there. Real comfortable" -- just like the Browns are at 4-1 are comfortably sitting in the playoff picture right now.

**Told you the Browns should've been favored by over a touchdown.