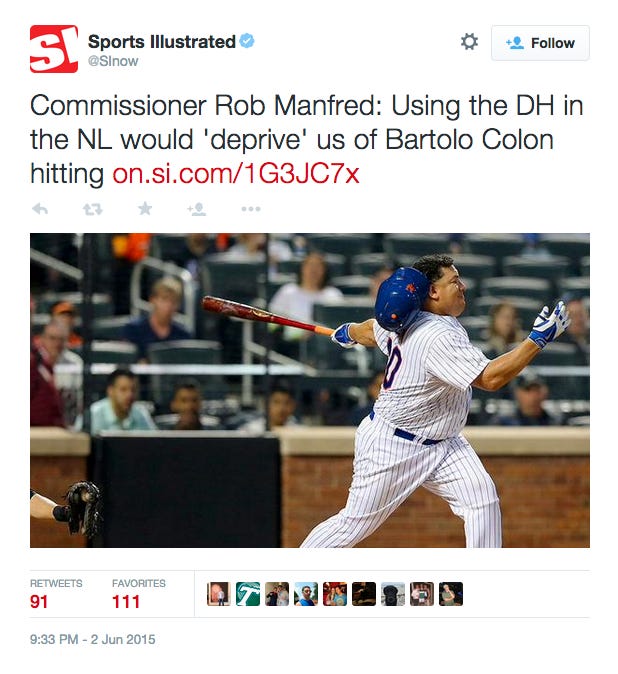 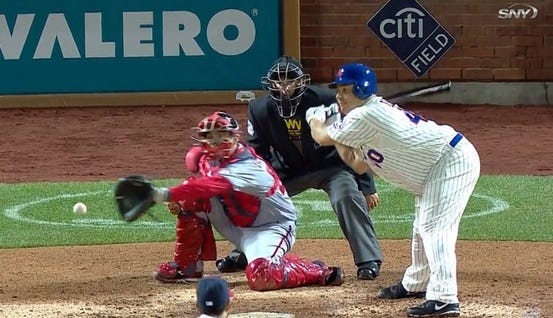 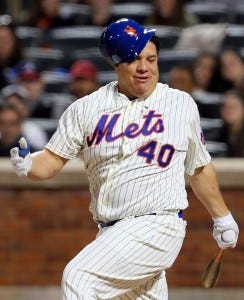 MLB.com-  On the divisive topic that is the designated-hitter rule and whether it ought to be applied to National League teams, there are valid, impassioned arguments made by both those for and against pitchers hitting. But Commissioner Rob Manfred might have come up with a new, timely and largely irrefutable addition to this great debate Tuesday… “Not having National League pitchers hit,” Manfred told reporters at Comerica Park, “would deprive us of the entertainment that Bartolo Colon has given us this year. It’s been a great source of entertainment for me. I don’t know about for the rest of you, but it has been for me.” “That does make sense,” said A’s manager Bob Melvin, who had Colon on his staff in 2012 and ’13. “I mean, you saw [Colon’s double] the other day. I’m just surprised he didn’t go for a triple, to tell you the truth.”

The pitcher of the common man does it again.  Bartolo Colon has more wins than Clayton Kershaw, is responsible for more Vines than Steph Curry, and is protecting the National League from being infected by the disease known as the Designated Hitter.  Is there anything this gentle giant cannot do?  I mean he even set the lofty goal of three hits this year and accomplished that shit before June arrived.

And please don’t give me the “DH is better” argument.  It was a lame rule created when teams in the American League couldn’t draw fans.  It was and still is a gimmick. It compromises the entire sport simply for the notion that you might score a couple extra runs or see a few less strikeouts. Its actually remarkable to me how much support it gets. In any other sport if a rule was proposed like “You know what? These guys just arent that good at XYZ so they dont have to do that anymore” it would be laughed at. Big Men dont have to shoot free throws anymore, we just sub in a permanent shooter for him. Cmon! Its more entertaining that way! Nobody wants to watch Deandre Jordan miss free throws! He shouldnt have to do that!

Get lost. So dumb. Plus this era is dominated by pitching anyway. Offense is down all across the board, regardless of the DH or not. You got teams like the Yankees that forever use the DH as basically a rotating day off for their aging veterans. People act like the DH is the most exciting thing in all of sports. Wrong. Bartolo Colon is the most exciting thing in all of sports. Maybe even the whole world. The entertainment he’s provided at the plate in 2 months outweighs 30+ years of the DH. Take everything Edgar Martinez and David Ortiz did combined and it doesnt even begin to approach Bartolo politely declining a triple because hes too gassed after ripping a ball to the wall. Watching that beautiful ballerina twirl around in the batter’s box is way more entertaining than just another regular Major League at bat that still has a 70 or 80% chance of ending up an out.

At the end of the day here’s how I look at it – The DH was created basically for the purposes of fan entertainment, and Big Sexy is flat out appointment television. The embodiment of entertainment. The fat, round, sexy embodiment. So we dont need to sub out shitty hitting pitchers, we just need said pitchers to be even shittier. Thats really the solution. Either that or just get more pitchers like Syndergaard who can blast the ball 430 feet over the wall. Get guys like deGrom who can swing the stick. Get pitchers who are better baseball players before ruining the other half of the league with a lame cop out rule