I've heard a lot of stories about Super Bowl LI over the last four years. And told quite a few. And have more to tell shortly (shameless plug). As they say, history is written by the victors.

But that's only true for a while. Eventually, to really grasp the significance of great, historic events and put them in proper context, you need to hear from the losing side. Which is why John Wayne came out with "The Sands of Iwo Jima" in 1949, but Clint Eastwood made the superior "Letters from Iwo Jima" 57 years later.

Which is why it's great to hear the other side of the greatest single game comeback in the history of sports from the defeated enemy perspective. At least from the perspective of someone who had six figures riding on the defeated enemy. Charles Barkely explained it to Dan Patrick this morning:

"The only time I've lost in the last three or four years was those Atlanta Falcons [choking gesture]," Barkley said. "The Atlanta Falcons -- what they've done in the Super Bowl and what they did against the Cowboys are two of the biggest choke jobs in the history of civilization."

Then, asked if he sobered up in the second half?  "No," he answered. "I just got drunker."

Wow, that really puts things in perspective. As Spinal Tap put it when they were standing at Elvis' grave, "little too much fucking perspective." I had nothing on that game but a few squares, my heart and my soul. And by the time copies of this print edition were going out to Florida: 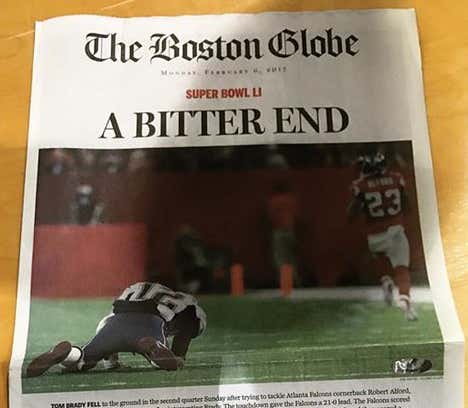 … I was having what WebMD described as "stroke-like symptoms." I'm not one of those people who turn away from such things. I didn't leave the room or, God forbid, shut it off. But I'd be lying if I said I fully grasped Dan Quinn's genius for blowing leads back then. I don't think anyone did. My son called from his barracks at Camp Lejeune surrounded by Marines who hate the Patriots and we were in a dark place. I distinctly remember enjoying none of Lady Gaga while I used nacho chip as a baby's pacifier and stared into the abyss. By the time my guests went home I was in a sort of catatonic fugue state. When they were 3rd & 10 on their own 9 and needing eight points for the tie, I was hovering above the couch, looking down at myself as Tom Brady hit Chris Hogan for 16. Even as they tied it up, I was praying for the sweet release of death. Only when they won the toss and started a drive in overtime did I pull myself away from the tunnel of light from which all my ancestors beckoned me. Before this happened:

Which is why it's so rewarding to hear the other side of it. To understand that, as much as I felt invested, I wasn't really. And that's something the non-gambler and the casual gambler need to keep in mind when we're freaking about about the outcome of a game. Money is an investment. $100,000 is an investment. It sucks to lose because the moment is too big for your team and coaching staff. But for even the most emotional Falcons fan (if there are any) with no money on it, losing didn't suck the amount of an all-expenses paid trip on a super yacht, a champion race horse or a BMW Series 5.

One thing though: As much as I admire his buddy's confidence and never-say-die attitude, they're wrong on the analysis. Atlanta lost specifically because they weren't "playing not to lose." Walking the ball up the court, so to speak. They should have. Barkley is right that they should've run the ball three times and taken the field goal. The better analogy would be that they kept running fast breaks and turned the ball over when they should've set up in the half court and run the shot clock down. One the possession Barkley is talking about, they became the first team all season to have the ball 1st & 10 inside their opponent's 23 and end the drive with a punt. Just to correct the record. Still, thoughts and prayers for Sir Charles.