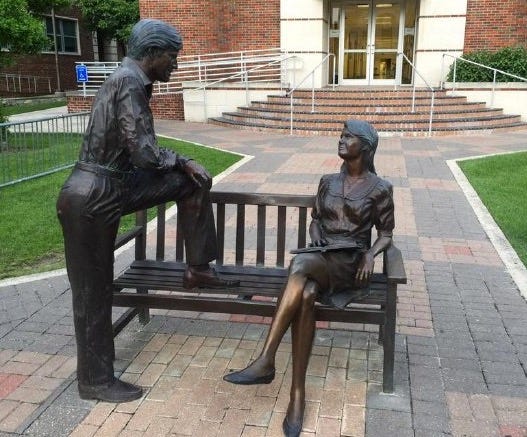 Washington Examiner – Scene: You’re a woman, sitting on a bench reading a book. Your male friend sees you on the quad and comes over to say hello and talk. You put down your book, lean back against the bench and smile. He doesn’t sit next to you; instead, he puts his foot on the bench and leans over his knee.

That scene is depicted in a statue at the University of the Incarnate Word in San Antonio, Texas, and despite no sign of distress or physical assertion, some women have decided it is a statue of “mansplaining” — a term used to describe men condescendingly explaining something to a woman.

Seriously. Here’s the actual statue and the claim of misogyny: 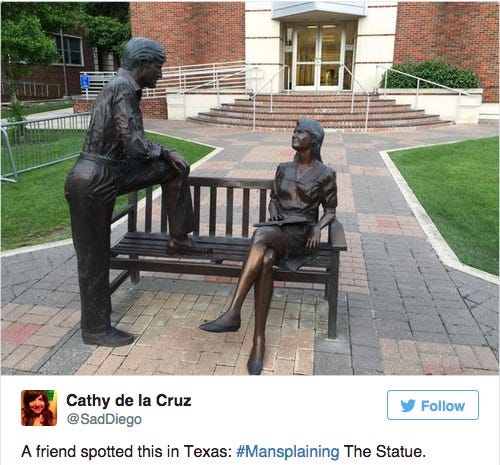 That tweet went viral over Memorial Day weekend. It all started when Ash Hernandez saw the statue on her way to take a teacher’s certification test. She was so outraged that she ran back to her car to get her phone to snap a picture.

Hernandez sent the picture to her friend Cathy de la Cruz, who tweeted it out. The tweet went viral, prompting other Twitter users to post photos of statues they found sexist.

“I feel like we’ve all been guilty of [mansplaining], males and females alike,” said Hernandez, the woman who took the original photo of the statue. “But it’s just less palatable when a guy’s up to it ’cause, well, he’s still on the right side of oppression.”

Oh my god how many times do we have to keep dealing with this stuff before we just all agree that it’s time to kill men off altogether? Just exterminate men. All men. Wipe em all out, every last one. I mean they’re clearly not learning right? They’re still out here polluting the world with their disgusting sexism and entitlement?

How else do you explain a sculptor putting this offensive misogynistic statue and symbol of feminine oppression smack dab in the middle of a college campus?

Two students and peers and friends having a casual conversation on campus in between classes? Ha, yeah, I bet that’s what you thought when you saw it, you male pig. Biggest most flagrant depiction of mansplaining these eyes have ever seen.

**quickly looks up what that means**

Yup, that. That’s what’s happening. You can’t hear the words of the conversation but this guy is 100% mansplaining something from class to this pretty little lady, probably asking her to come to a frat party later on too where he plans on objectifying her and engaging in some date rape.

While we’re at it, let’s check in with the artist just to get confirmation on this angle.

If you didn’t see the sexism in the statue, you’re not alone (and probably a sexist by these standards). If you instead see two friends talking on a bench, then congratulations, you understand art better than you think.

Because that’s what the statue is actually depicting.

“It was two students visiting, talking … implying nothing beyond that,” the sculptor, Paul Tadlock, told WITW. In fact, that’s Tadlock’s daughter in the sculpture. And the reason the male student has his foot up on the bench? It’s not because he’s talking down to the woman. It’s because Tadlock wanted “to add a little more character to the scene.”

Tadlock also said he wasn’t that upset over his sculpture being misinterpreted. He didn’t even know what mansplaining was until it was explained to him.

Whatever, guy is probably a scumbag woman hating mansplainer himself.

PS – The fact the school had to release a statement about this fucking statue of a fucking guy and a girl fucking talking makes me hate everything.

For its part, the university also denied any notion that the statue depicts condescension toward a woman.

“The statue has long-symbolized the friendship and camaraderie that develops among students as they attend UIW,” school spokesman Carl Myers told WITW. “We are deeply saddened that this image of friendship has been misconstrued as a symbol of sexism on social media. Nothing could be further from the truth.”