We all did the same thing last night when Julian Edelman batted a simple bubble screen from Jarrett Stidham up in the air like it was a red Solo cup in a game of Flipadelphia right to Tyrann Mathieu for a pick-6 that effectively put the game out of reach. And again later in the game when he laid out for a pass, got his hands on it but couldn't secure it. And probably earlier in the game when he muffed a crossing route but Gunner Olszewski activated his Wonder Twins power to haul it in. And that's to assume what this guy says is part of a larger problem:

And yes, it's objectively true that Edelman does, in fact, lead the NFL in drops since 2018, given the fact he led the league with 13 last year and eight the year before to go with the one he is officially on the books for this year. But does the fact that it's true make it, you know ... the truth?

Meaning, is this a sign that as he hits his mid-30s, he's losing his hands? Becoming less reliable? Going all K-Y Liquibead hands on us in his advanced years. Like everyone on your in-game text threads was yelling at you in ALL CAPS last night?

As is usually the case, the truth is a lot more complicated than the numbers indicate.

Yes, Edelman led the league in drops last year. He also had the fourth most targets with 153 and the fifth most receptions with 100. Of course he's going to mix a lot of drops into that mix. You don't have to be Will Hunting to understand how the law of averages work. Have a lot of attempts at a thing and you'll have more failures than someone who doesn't. Gordon Ramsey's had a few meals sent back out of the millions he's served. That doesn't make you a Michelin Star chef because you pull off a turkey every Thanksgiving. This is why percentages were invented.

The much more telling stat is Drop %. This was last year's final ranking: 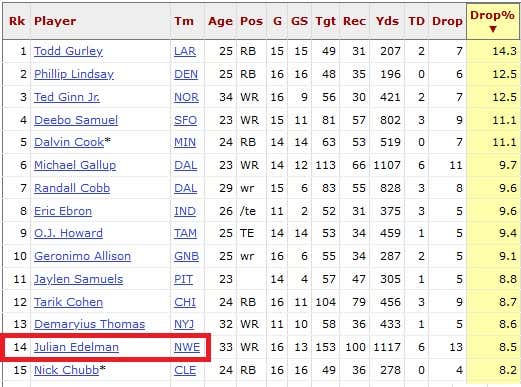 So you can argue 14th highest drop rate in the league isn't good enough and I'm sure Edelman won't argue with you. But you've got a lot of guys on this list to answer for, including Dalvin Cook who went to the Pro Bowl, Deebo Samuel who was a big rookie sensation, and another 1,100-yard guy in Michael Gallup. As well as backs and tight ends who presumably had shorter, easier catches in less traffic than the slot receiver who was his quarterback's only dependable target and therefore doubled as much as anyone.

And if you're interested in going with me into Pro Football Focus' Analytics Factory and down the Metrics River to where the Stats Oompa Loompas keep track of such things, they've been making this case for years. Remember when Wes Welker was supposedly diagnosed with the Drops after that one in the Super Bowl That Shall Not Be Named II? They made the same case in July of 2012 (paywall):

It won’t be a surprise that those with more opportunity have tended to drop the most balls. Indeed, if you look at Wes Welker, his 32 drops were second in the league over three years. The only wide receiver with more than him? New Bears receiver Brandon Marshall who led the way with 35 drops over three years. …

Players like Marshall and Welker may have more drops than anyone else, but Welker doesn’t figure in the Bottom 15 of the 61 players who had at least 125 catchable balls thrown their way over the past three years, and Marshall was just in the Bottom 10. Instead, the worst offender was Roy Williams who has dropped 14.62% of catchable balls over three years. That was narrowly worse than James Jones of the Packers, with the Buccaneers' Mike Williams bringing in the third highest mark at 13.42%. 49ers fans (and Alex Smith) may want to look away when he sees the drop percentage of some of his receivers (new and old) as Crabtree, Mario Manningam and Randy Moss all rated poorly.

What's most important is not the simple number of drops. It's whether or not Edelman is trending toward a higher drop rate. And there again, the answer is a resounding no.

PFF tracks drops in terms of a number grade, from 0-100, and color coded with red being the worst and blue being the best. Edelman's entire career: 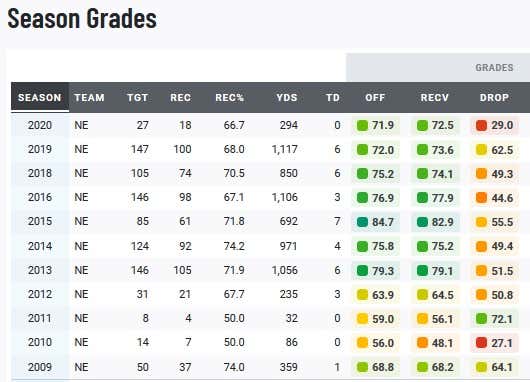 He's not done well through the first month of the season, there's no denying that. But it's not like this long, slow steady decline. His worst season was 10 years ago when he was just a pup. He was better in 2019, again when he led the league in drops, than he had been since 2011, the best year his hands have had, according to the nerds. And he did it while posting career high in yards and his second highest total in catches.

So the bottom line is that your eyes are lying to you. And they have been for a few years. He's got to clean up the drops like last night's against KC. But the numbers and analytics say it's not a trend. (Yet.)