There are two versions of this story online. One where a completely sober but very stressed young father, whose wife was battling cancer, decided, "fuck it, YOLO," and went for it during a bit of a psychiatric meltdown, and another where he was just hammered and "yeeehawwww-ed" it. Either way, here's what went down once he was in the car:

In one of NASCAR’s most bizarre episodes, Darren Crowder, a Birmingham local, found his way into the ceremonial Pontiac Trans Am before the May 1986 race. The car had apparently been left unattended near the front grandstand.

Crowder, at the time age 20, pulled onto the famed oval and started turning laps. Since the race was minutes from its scheduled starting time, NASCAR only noticed something amiss when Crowder passed an official who correctly identified him as, uh, not the pace car driver.

(The call, via team radio: "Who's that fucker in the pace car?")

Crowder proceeded to lead police cars and motorcycles on a high-speed chase around the 2.66-mile oval. According to the New York Times race report, he managed “more than 100 miles per hour on the 3,000-foot backstretch” and was only stopped after “safety and maintenance trucks formed a blockade across the track” at Turn 4.

But he wasn’t done. When approached by track workers, Crowder allegedly began impersonating a high schooler picking up his younger brother for afternoon carpool:

Regardless of whether it was stress or liquor (or both) that led to this action, the crowd of 125,000+ couldn't get enough & roared in support as they finally got him out of the Pontiac. Just another crazy moment in what is always a wild weekend...

I thought perhaps 'Dega's 'Big One on the Boulevard' was over-hyped until I finally went myself last year.. But it is, without a doubt, one of the nuttiest parties I've ever been to.

Kicking off the excitement was my one and only private jet flight & sharing a massive, luxury RV in the infield with Spider & Dave, an experience I didn't make awkward in any way. The older folks in the RV next door kept asking me if Dave was in a rock band or something because he kept showing off his tan by the grill while young people crowded him constantly. "Yes, bassist for The Goo Goo Dolls." 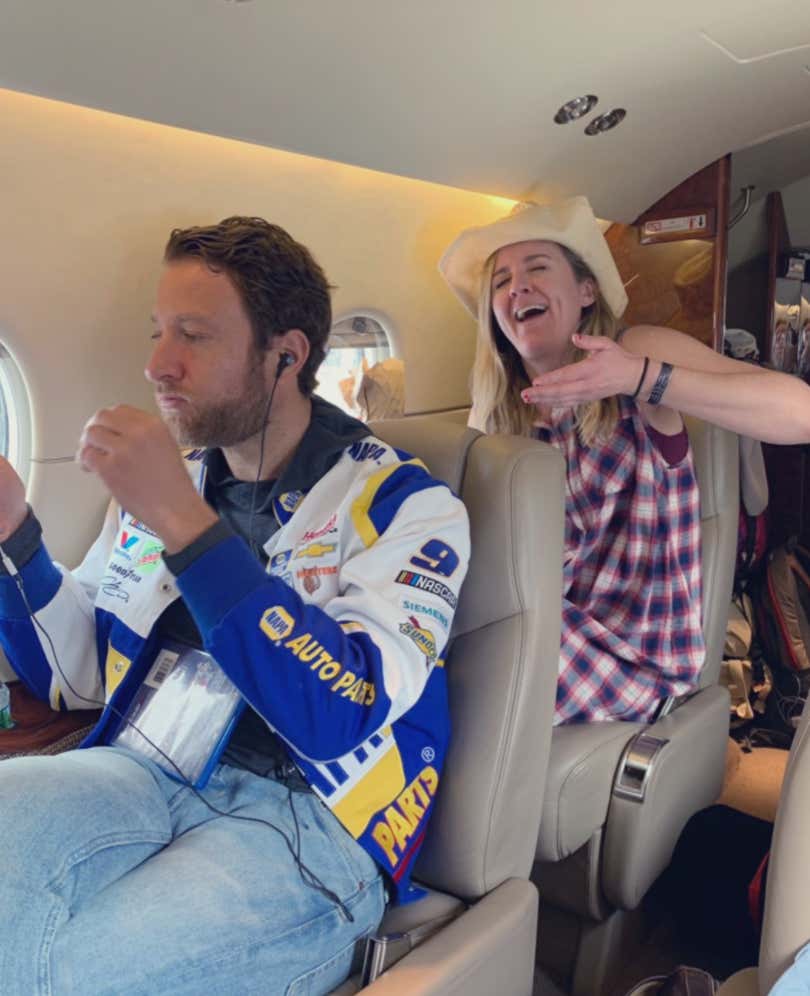 Then, after getting my ass whooped in BBQ sauce wrestling & losing Dave & several big-name NASCAR drivers hundreds of dollars each, I was free to roam the Boulevard. Upon linking up with Caleb I soon found myself taking whiskey shots out of large men's bellybuttons, dancing poorly on rickety, homemade stages (I thought they were cheering for me, but it was for the hot gal taking her pants off below me), tossing dollar bills to ladies of all ages, shapes & sizes working the poles at a multitude of DIY outdoor * strip clubs ( * Not NASCAR sanctioned, just fan goofin', of course) …everywhere you turned there was something fun to do. 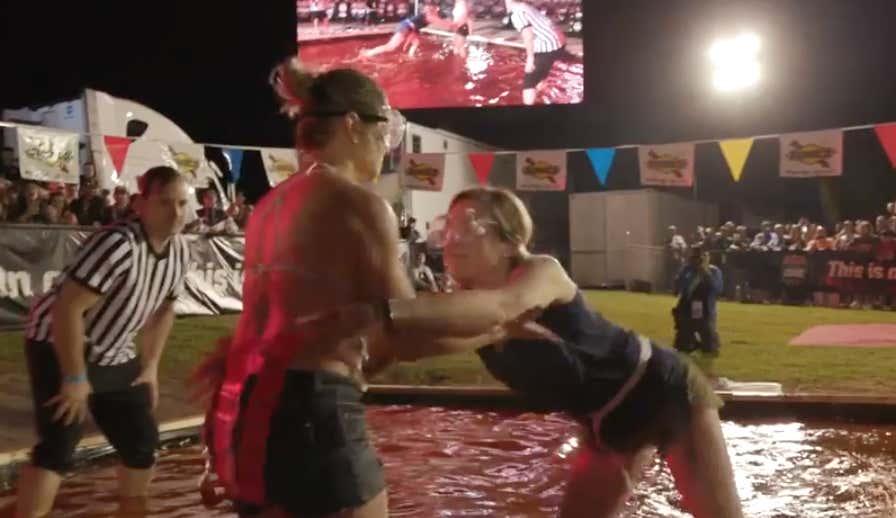 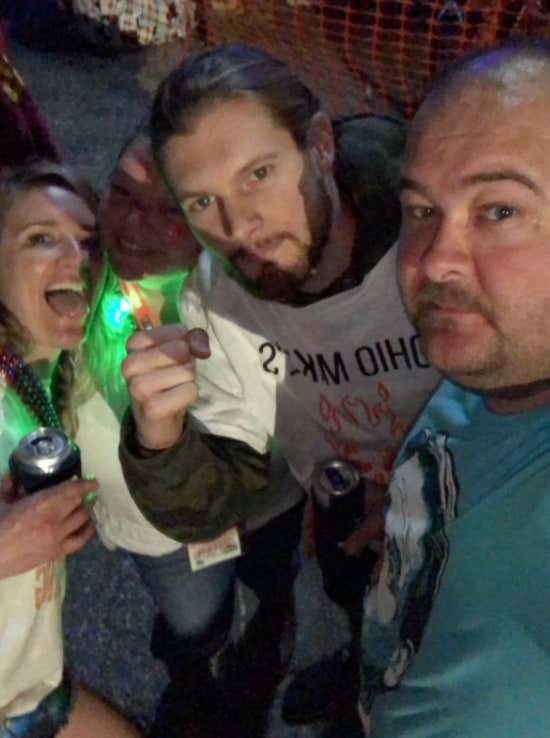 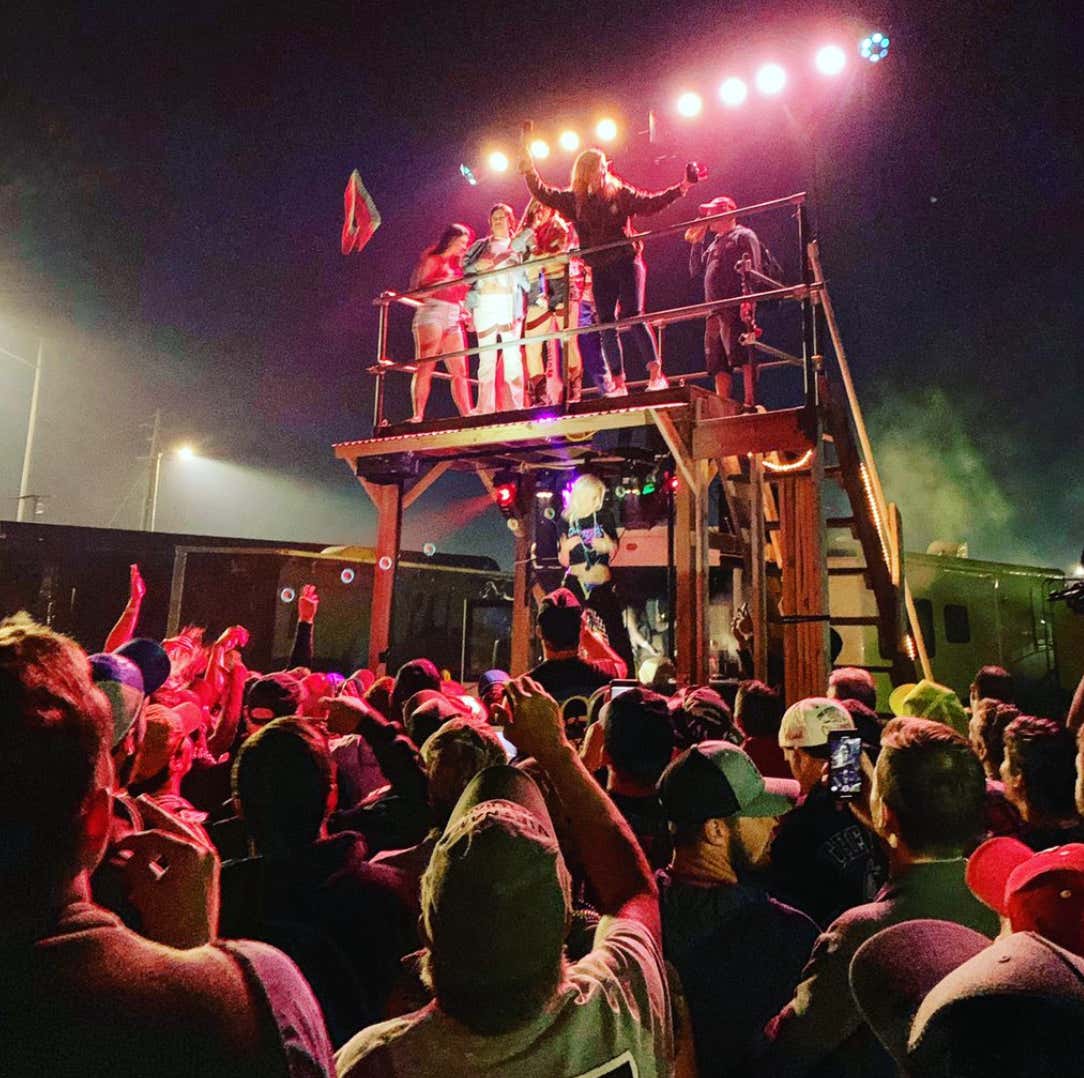 The next day it continued on as I got a personal mornin' moonshine tasting with some fine shiners, then wound up doing a boozy pedal bike tour with the woman who whooped my ass in the BBQ sauce pit. Soon, for reasons I still don't recall, I had traded shirts with someone & was signing a bunch of nipples. It wasn't that people knew who I was (they 100% had no clue, #humblebrag), it was just that I got my hands on a Sharpie so if you had a nipple I was marking you with the 'a' in Kate around your areola. People genuinely began lining up for it. Hot ticket item. I felt like a king. 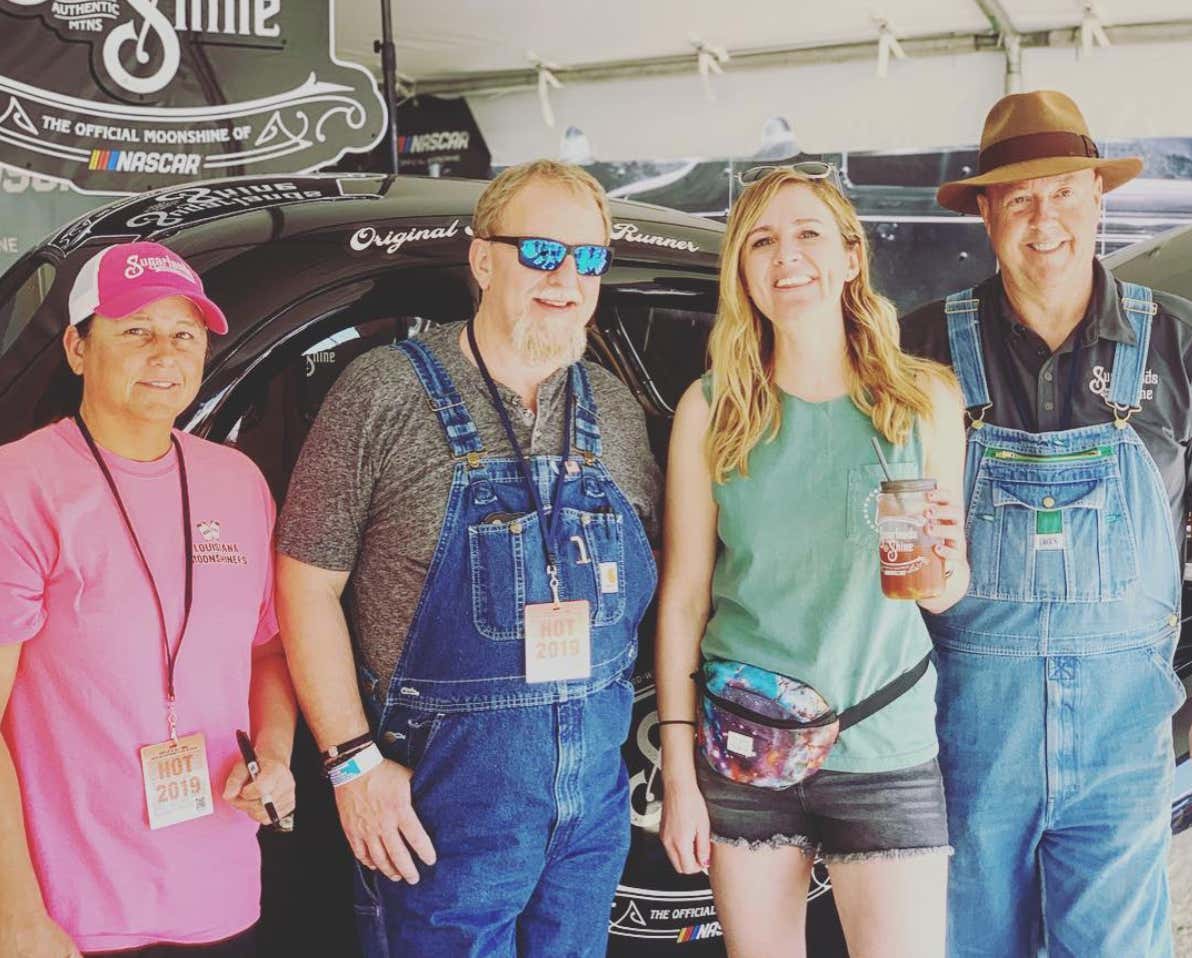 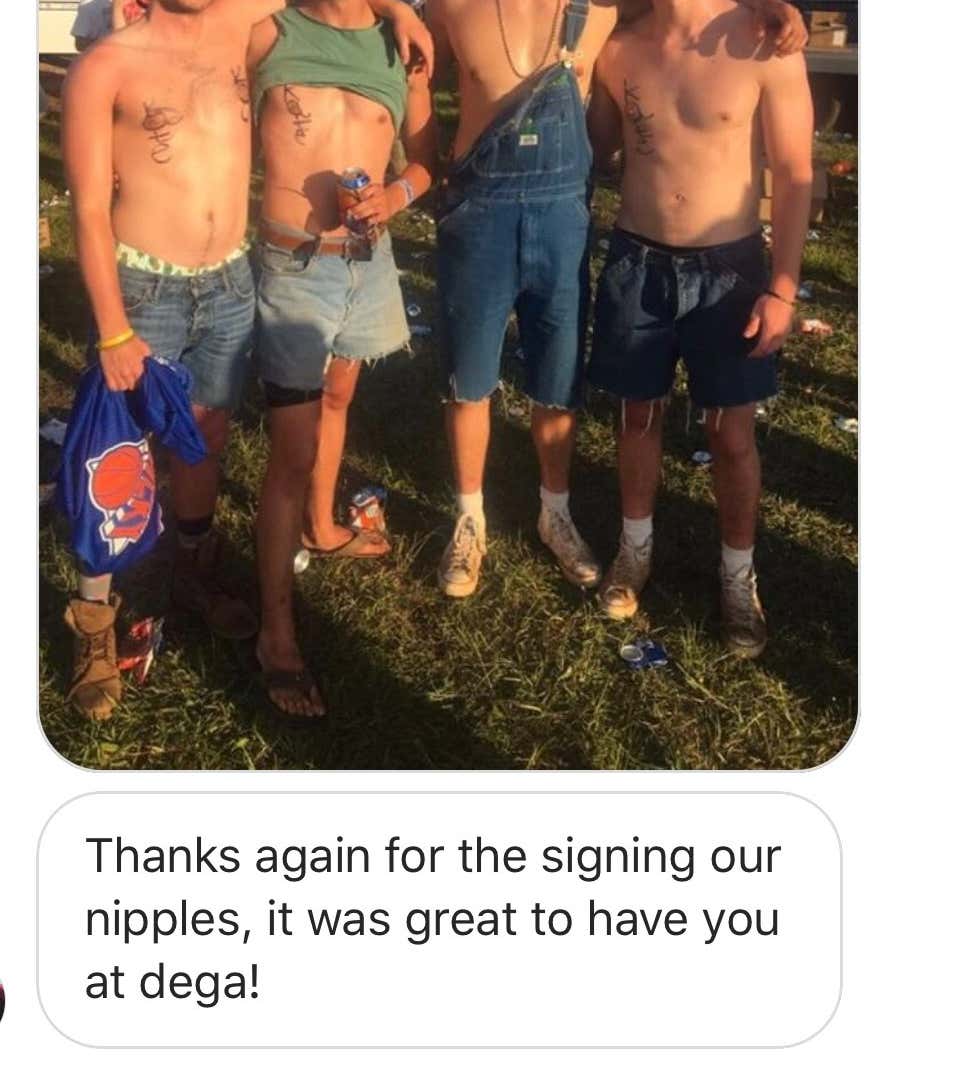 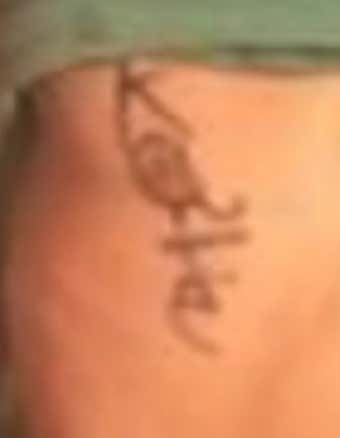 And then after all that whirlwind in the hot sun, it was time to head to the track for the race. So yes, I can see how someone would see a pace car with some keys in it and think "You know what? I got this". Especially back in 1986 where I imagine things were about 100x more berserk than anything I experienced.

Anyways, enough about me (think I've been missing 'normal times' & fun events like NASCAR so I went down a rabbit hole… blahh I can't wait to get back to regular life)… I hope your weekend is more fun than going 100 miles per hour on a 3,000-foot backstretch, cops in chase, as a crowd of 125,000 cheers you on. Just, uh, wear your seatbelt & get a DD if you need one.