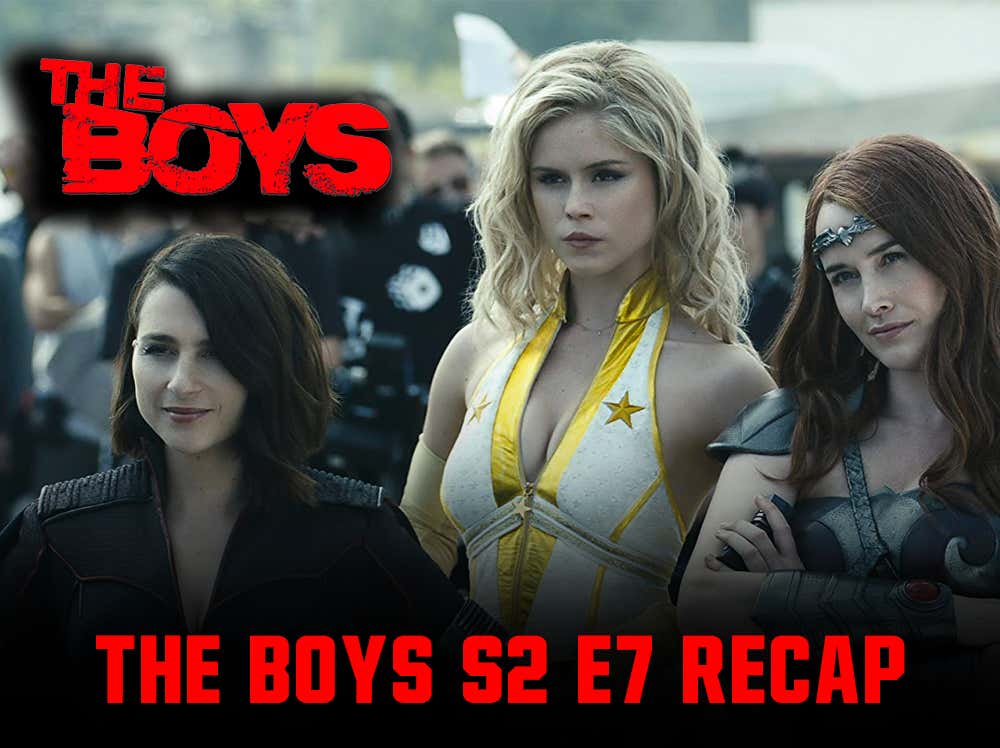 The episode begins with look into the radicalization of a random man by way of internet propaganda. Buying into the us-vs-them rhetoric that he constantly consumes from Homelander and Stormfront, he walks into a convenience store and murders a clerk that he is convinced is a supe-terrorist because of a reflection he sees in his eyes (evoking memories of Balbir Singh Sodhi, a Sikh-American gas station owner that was murdered by a racist after 9/11 that believed he was an Arab Muslim).

They then go on an extended rant, enforcing the rhetoric and inflaming the reactionary crowds desire for more Supes. Homelander brings her to visit Ryan, which obviously scares Becca. There is a pretty funny scene where Ryan shows off a stop-motion LEGO reenactment of 'The Blind Side', which got a hearty laugh out of me. He also did 'Dances WIth Wolves' and 'Terms of Endearment' which got a similar laugh. Homelander tells Becca that he wants to take Ryan out into the world, saying that growing up in an artificial enviornment fucked him up. Becca begs him to let Ryan stay with her, and he seemingly relents. Later on, though, Becca finds out that Homelander told Ryan the truth about his environment. Him and Stormfront fly away with Ryan in tow.

Starlight meets with her mom, who is still trying to reconcile with her. Black Noir shows up at the coffee shop they're at and knocks her out, abducts her and imprisons her in an electric-proof box in Vought Tower. While the rest of the Boys are out, an injured Hughie is stuck in a hideout protecting Lamplighter, who is going to be the key witness in the upcoming legal action against Vought. They basically sit there watching Supe parody porn, and Lamplighter likens himself to the cuck in it while saying Hughie is the cuck-fluffer. When they find out via news conference that Starlight was imprisoned, Hughie talks Lamplighter into helping him break into Vought tower to free her.

They manage to get in, but Lamplighter misleads Hughie right to the 7 conference room. He gets pissed off when he finds out they removed his statue from the 7 memorial, and then kills himself by lighting himself on fire. The fire sets off the fire-alarms, which inadvertently give Starlight a spark of electricity to make her escape with. She runs into Black Noir, though, who beats the shit out of her and is about to finish her off when Maeve intervenes. Maeve puts Noir in a chokehold, takes off his mask and jams an Almond Joy in his mouth. She tells Starlight that Noir has a tree nut allergy, before kicking away his epipen as he chokes out. Starlight begs Maeve to join her, but she refuses. Starlight finds Hughie and her mom, and they get back to Frenchie's hideout.

Butcher gets a call from his mother, who says his dad is dead and that she flew in to see him. When Butcher goes to meet her, however, he finds out his dad is alive and there to meet him. He gives his dad(who he hates) a few minutes to say his piece, as he is going to die soon of cancer anyway. His dad apologizes for being a bastard, but says that it was necessary to make him stronger. They blame each other for the suicide of Butcher's brother, Lenny, and get into a fight before his mother separates them. Later on, she tells him that she didn't bring him to his dad for the sake of his dad, but for him. Hoping that seeing his dad that helpless would help him avoid(presumably) the trauma of Lenny.

In the meantime, MM and Malory visit Dr. Vogelbaum, the ex-Vought scientist that raised Homelander, to try and pressure him into testifying in the upcoming Senate hearing over Vought's activities. Vogelbaum was paralyzed by Homelander in season 1, but he still refuses to go against the company, saying that he fears for his family's safety. Later, he gets another visit from Butcher, who is not as polite. He tells Vogelbaum if he doesn't help them, he will murder his daughter that is in the other room, then hunt down his other kids/grandkids and murder them too. Vogelbaum relents, and goes to the hearing.

Queen Maeve is trying to mend her relationship with Elena, who found the footage of her abandoning the crashing flight from season 1. Elena says she is leaving to go stay with her sister, which devastates Maeve. She tosses a table in rage (showing some emotion like I was asking for in the last blog!!!), saying that Elena wanted to see the real her, and that was it. Later on, Ashley walks in on Maeve post-devil's threeway, and she has clearly given up.

We get a quick look at the Church of the Collective, with A-Train visiting The Deep at a church party. The leader of the church, Alastair Adana, shows up and tells them that he is talking to Edgar about getting them back into the 7. He also tells them that Eagle the Archer, the C-List supe that recruited The Deep into the church, is now persona non grata as he has gone clear, so to speak. Later on, A-Train and The Deep are at a bar and see a news report where Eagle claims the church leaked a sex tape of him because he spoke out against them.

We finally get to the senate hearing, with Homelander, Stormfront, Maeve and Shockwave (A-Train's replacement) sitting front and center. The boys "gotcha" witness, Vogelbaum, arrives and Homelander is pissssssssed. His testimony is about to begin when the lead senators head fucking EXPLODES, just like Rayner's(Butcher's CIA contact) head did in episode 1 of this season. The senator is followed by Vogelbaum, Shockwave and a bunch of people in the crowd as Homelander, Stormfront and Maeve look on, more confused than scared. The broadcast is cut, and Hughie asks what they are going to do now. Butcher settles in and gives the look as if they're about to go to fucking war.

I enjoyed this episode a TON. It's essentially the Red Wedding-lite for this show for a few reason. Obviously the mass killing to end the episode is the direct parallel, but even bigger are the implications. All the momentum of the last two seasons was really leading towards this season, and now that is dead in its tracks. With the conventional means of warfare gone, it's time to go nuclear.

Who did the Scanners-esque head explosions? I honestly have no clue. Some people were guessing Cindy, the escaped Supe from Sage Grove. But that doesn't line up with Rayner's head explosion from episode 1. I assume that Edgar was behind whichever supe committed the killing, and that Vought is going to somehow spin this into saying it was a supe terrorist attack on American soil, which means they need Vought more than ever. The sheer confusion from Homelander and Stormfront makes me think that they weren't made aware that this was happening either. The internal conflict of that duo vs Edgar is something to watch out for.

Queen Maeve!!! She finally showed some fucking anger and actually did something! I was literally begging for this in the last blog and we finally got it. We also finally got some headway with the Frenchie-Kimiko relationship, which has been extremely repetitive since it came to be.

More than anything I cannot wait for next Friday, the finale of this season. There is only so much they can do in an episode, but I think we're going to get some huge set up for the fucking WAR that is going to be season 3.

- You might recognize John Noble(Butcher's father) as Denethor from 'The Lord of the Rings: Return of the King'. Reuniting him with fellow LOTR actor Karl Urban is pretty cool

- Nathan Mitchell, the actor who plays Black Noir, actually has a tree nut allergy. This inspired the idea for the character.

- Lamplighter talks about sneaking college girls into Vought tower, and Congresswoman Neuman says that he fucked half the Sacred Heart cheerleading squad. This leads to the conclusion that the blackmail the Boys had on him might have something to do with him having sex with minors.