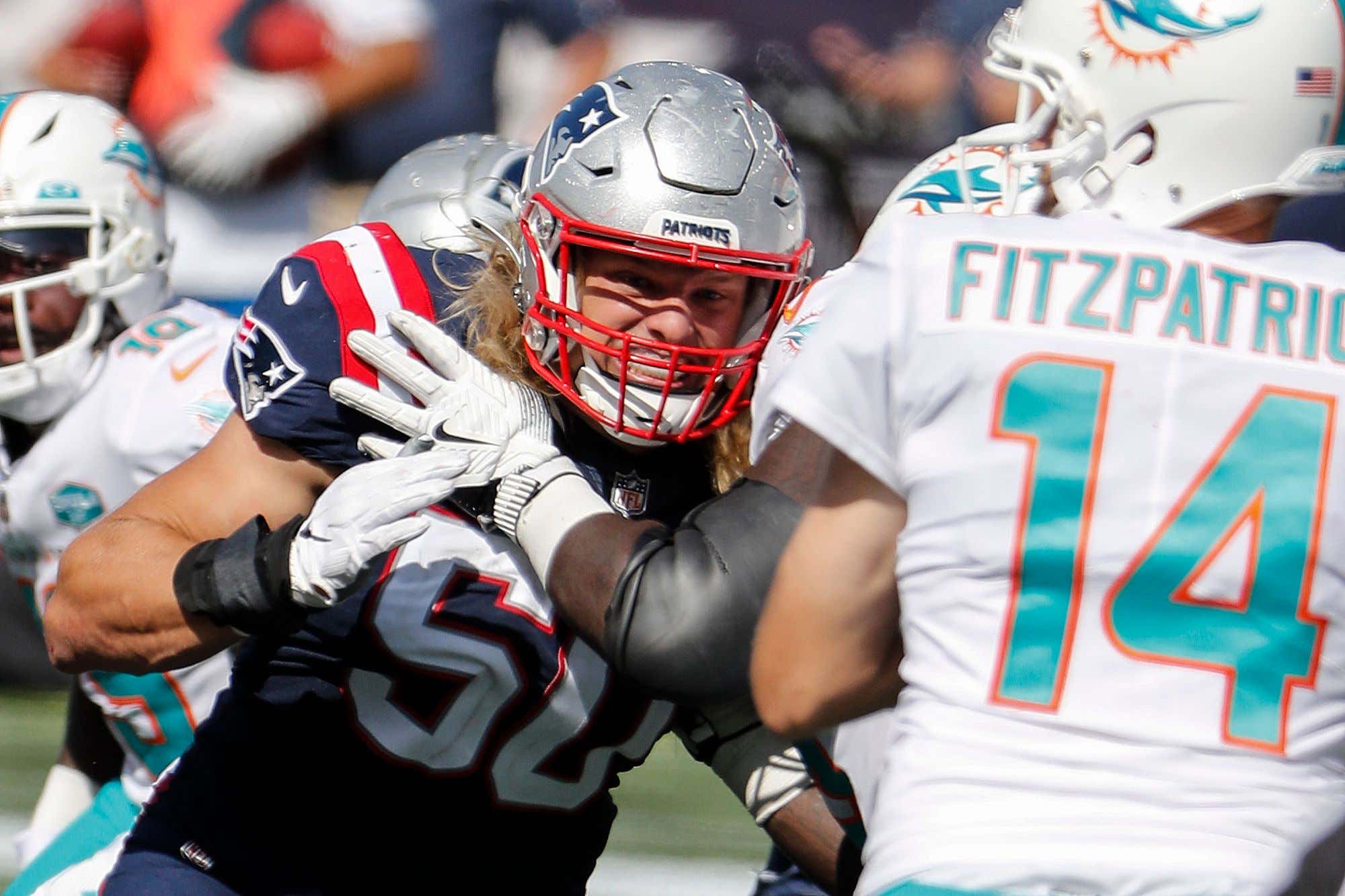 Yesterday I posted about Patriots sixth round rookie guard Michael Onwenu, and how last week he went from situational role player to first time starter to the top rookie at any position in the NFL, according to the math elves who work at Cris Collinsworth's little analytics toy shop, Pro Football Focus.

And if you're someone who puts much stock in the advanced metrics, the good news continues today.

It's the kind of analysis you can use in your next debate against someone arguing the Pats last three drafts have been total failures, interrupt their two minutes, call them liars and clowns and say how much smarter you are then them. The way civilized people do.

The fact is, the last three drafts have not been major successes, for a lot of reasons. Not the least of which is that several of their top picks missed significant parts of their rookie seasons due to injury, including each of their three first-rounders. Among the 2018 class, the highest pick, Isaiah Wynn (No. 23) missed his whole rookie year. Sony Michel missed three games in all before putting together one of the great postseasons by a rookie RB ever. JaWhaun Bentley went from impact starter to out for the season in a matter of three weeks. And everyone remembers N'Keal Harry missing the first half of last year and then struggling to earn Tom Brady's trust when he did hit the field. Then there have been total whiffs like Duke Dawson and some who haven't contributed yet because they were more or less redshirted like Damien Harris, who returns from IR this week.

Still, while the misses have been well documented and memorized by every twerp who believes in the "GM Belichick can't draft" narrative so he can pass them down to his children. While ignoring the successes. There are significant contributions being made by members of the Classes of 2018-20. And the analytics guys are keeping the receipts. The best examples:

Chase Winovich has turned into an every down beast.

So according to ESPN Analytics, when it comes to the 1-on-1s as a pass rusher, Winovich is sixth best among edge players, winning 31% of the time. On running plays, he's second best, at 39%. Behind only Khalil Mack, the 3-time All Pro and DPOTY who became the highest paid defensive player in history a couple of years ago.

Only Winovich, Mack and Brandon Graham crack the top six in both categories. Here's that fun fact depicted in handy graph form:

Isaiah Wynn is the LT you hoped he'd be.

Left tackles and the Patriots are typically like penguins: They mate for life. When Wynn missed his rookie season he was subbed by Trent Brown, who did a tremendous job as they won a Super Bowl and he left to take Mark Davis' money in Oakland. Aside from that one season, the Pats had three starting left tackles since 1987 Bruce Armstrong, Matt Light and Nate Solder. In football terms, that's equivalent to the Red Sox having Ted Williams, Carl Yastrzemski and Jim Rice in left field from 1939 into the late 80s. And Wynn is rewarding their faith in him. In the Raiders game, PFF did have him responsible for one QB hit and one hurry, bringing his total pressures on the season to two. With zero sacks. In 101 pass blocking attempts. Among tackles with over 100 PBLKs, he's got the 9th highest grade. With the 11th highest overall grade among all tackles. And he's one of only six LTs in the league (minimum 188 snaps) with a penalty called against him.

Harry is never going to be DeAndre Hopkins. The Patriots didn't expect him to be when they took him at No. 32 overall last year. He's simply not built to be that type of wideout. He was among the slowest at his position in the 40 at his Combine, but among the most physical. He was drafted to be a tough, reliable, possession reciever who can line up all around the formation, fight off press coverage and move the chains. Which he is doing. Remember the comparisons to the WRs drafted before and after him last year? Do you notice you don't hear those so far in 2020? Right now he's second among all second year wideouts in receptions, ahead of Marquise Brown who was taken ahead of him and AJ Brown who was drafted after. Deebo Samuel hasn't seen the field. Mecole Hardman is a depth guy in Kansas City. And JJ Arcega-Whiteside hasn't had a reception yet. Again, he'd not the kind of player whose numbers are going to blow your kilt up and the Patriots aren't building that type of offense this year. But among the Class of '19, he's seventh in yards, third in YAC, seventh in 1st downs and has a respectable 90.4 passer rating when targeted. It would be great if he was DK Metcalf or Terry McLaurin. Not many sophomores are. But just to circle back to the analytics geeks, let me dispel the criticism that he can't get open. According to NFL's NextGen stats, Harry gets an average of 3.6 yards of separation. Only 10 WRs in the league have done better.

There's a long way to go, obviously. We can expect a bigger role for Onwenu going forward and for Harris to finally get his shot. Rookie Kyle Dugger has shown flashes of brilliance as they bring him along slowly. Same with rookie linebackers Anfernee Jennings and Josh Uche, who have seen limited time but whose roles should increase. Second year guy Joejuan Williams is getting more reps as a positionless hybrid LB/DB and has been covering tight ends effectively. So there's every reason to think we'll see more contributions out of these last three drafts. But if you produce just a few starters such as Onwenu, Winovich, Wynn, Michel, Bentley and Harry, you've done your job as a personnel department. No matter how badly the truthers think GM Bill is hurting HC Bill.