Alright, that's not perfect news, but it's a hell of a lot better than when the first few chunks of the NFL season's sky appeared to be falling according to some people. If you had told me a year ago that the entire NFL world would be focusing on what happens after a bunch of long Q-Tips got shoved up the noses of 50 or so superhumans in Nashville and Minneapolis, I would have told you that 2020 sounds completely fucked...which oddly checks out! Anyway, if everyone was going to freak out about yesterday's mini outbreak, they should breathe a sigh of relief for today's news while hoping everyone and everything continues to improve. Fuck it, I'm gonna throw a #progress hashtag in the blog to make sure things keep moving in the right direction. The Titans not being able to practice before a game against the Steelers seems a bit unfair, but I guess that's the penalty if your team contracts this asshole virus. Luckily for Mike Vrabel & Co., they can always fall back on running this play 20+ times with Derrick Henry, even against a stout Pittsburgh Front 7. 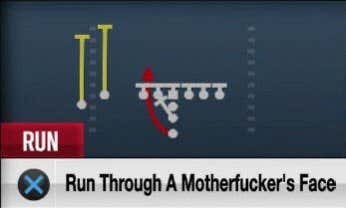 Also while I'm here [turns on dad voice], I don't want to hear a fucking soul complain about tomorrow night's Broncos/Jets game. I know both teams weren't exactly Super Bowl contenders before the injury bug ran train on their rosters and I'm pretty sure that Mark Rypien vs. Sam Darnold will not be the next Manning vs. Brady (God I wish Swag Kelly was still on the Broncos and starting at QB). But NFL football is still NFL football and yesterday's news should be a reminder just how easily it can be taken away from us. So no game shaming. Not in 2020. And shout out to the Jets for doing whatever they can to at least look like a better team tomorrow night.