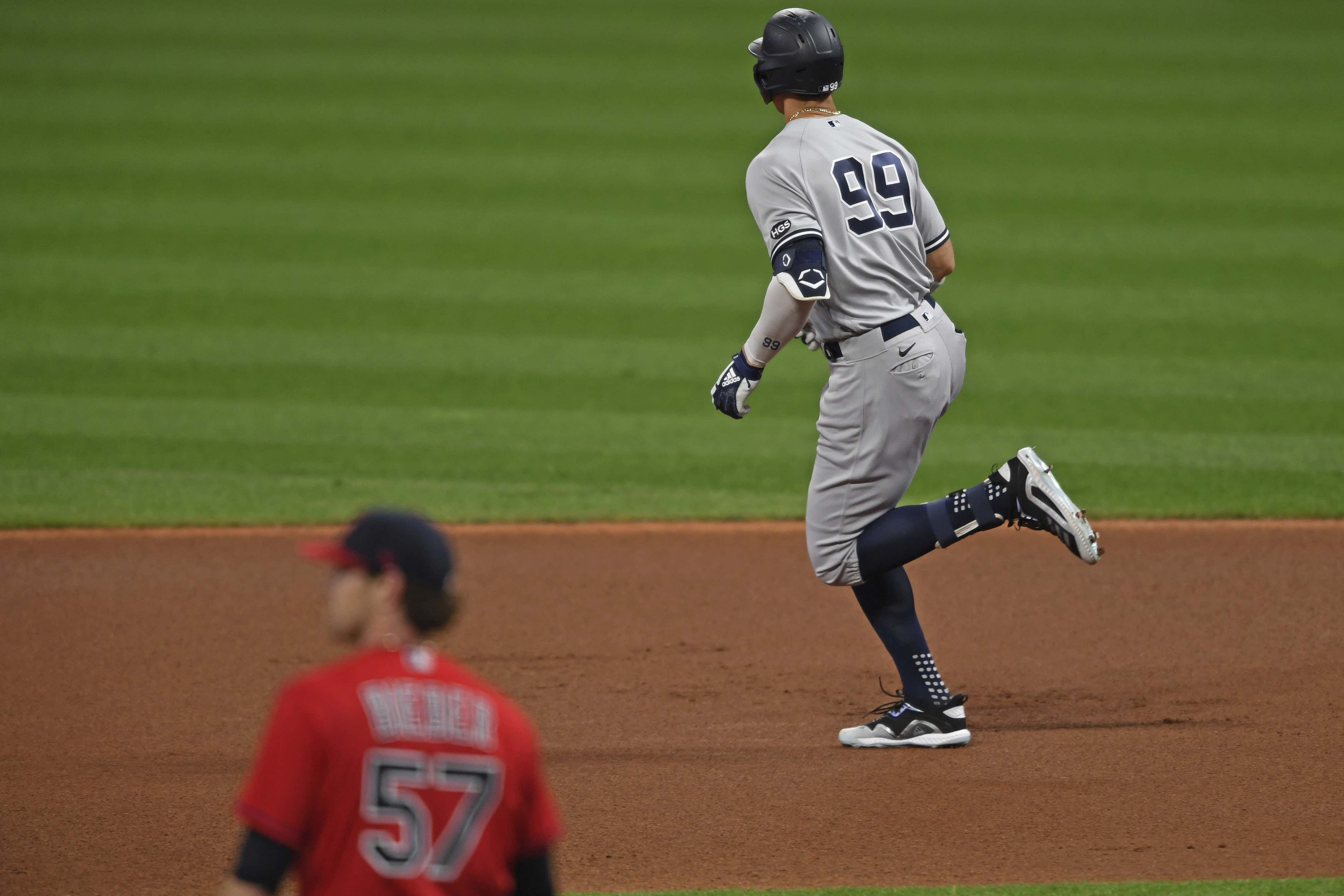 As the MLB postseason got going today everyone circled Shane Bieber vs. Gerrit Cole as the marquee pitching matchup of the day. Two aces going at it in primetime. The AL Triple Crown of pitching winner vs. the $324 man himself Gerrit Cole. Over under set at 6.5. The haters said the Yankees couldn't hit good pitching. They couldn't win on the road. All they do is strikeout or ground into double plays. That Yankees lineup responded by putting up 12 runs on 15 hits with four homers. An absolute demolition job against the runaway American League Cy Young. THIS guy is the runaway CY YOUNG? Holy moly.

It all started in the first inning. DJ LeMahieu led things off with a vintage opposite field base hit to right. At that point I honestly relaxed. This wasn't going to be a fun time for Mr. Bieber. Aaron Judge proceeded to send the next pitch over the right center field wall for a two run blast. Five pitches in, 2-0 Yankees. Before you could even get settled in on your couch the New York Yankees were rolling.

Yeah alright we don't really know what to do in these moments. We know.

Before the game I said the Yankees had to do fours things specifically. 1) Work Biebers pitch count 2) get Gerrit Cole an early lead 3) don't ground into double plays that kill rallies 4) avoid the midges. They did all of that perfectly.

In the 3rd inning Voit kept the pressure on with a huge two out double in the gap.

So many times this year they've had a nice first inning and gone silent afterwards. The Yankees refused to stop scoring in this game. They were on a goddamn mission to destroy the Indians. Just a relentless performance from this lineup. The 7-8-9 hitters combined to go 8 for 14 with 6 RBIs. EIGHT FOR FOURTEEN. That's how you win a World Series championship.

Pretty much every Yankee fan complained about Gardner starting over Clint Frazier in left. Gardy responded with a three hit game including an RBI double and two run homer. A struggling Gleyber Torres went 4 for 4 with a homer himself. He's currently hitting 7th in the order. I can go on and on. It was unbelievable, especially off of Shane Bieber. They made the runaway Cy Young winner look like a single A pitcher. On the flip side, Gerrit Cole was a fucking machine on the bump.

Everyone said this was a game that you pay Gerrit Cole $324 million for. Well how's 7 innings, 2 runs, 0 walks, and 13 STRIKEOUTS. The 13 punch outs were actually the most ever by a Yankees pitcher making their team postseason debut. Not bad. How about joining Tom Seaver as the only pitcher in baseball history to strikeout at least 13 and walk zero in a postseason game. Enjoy his dominance below.

When this man was in Pittsburgh I begged the Yankees to trade for him. I wanted this. Now he's here and it's everything I've ever wanted. This man is a goddamn horse. Worth every fucking penny.

12-3 shit pumping. It's just one game, but man was that awesome. Yanks didn't even have to think about using the important bullpen arms either, while Bieber only lasted five. Tanaka tomorrow against Carrasco. Let's end this shit.

WATCH VIDEO HIGHLIGHTS FROM GAME 1 AT THE BARSTOOL SPORTSBOOK: